"Tangled Up With The Dead: An Historical Ghost Story" 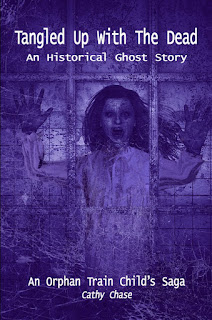 "Between the years of 1854 and 1929," writes Chico novelist Cathy Chase, "from the large cities in the Eastern part of the United States, orphaned or abandoned children were loaded onto trains in large groups and sent West to be given to families. As many as 250,000 children were relocated." From that starting point, Chase spins the story of one of the orphans, fifteen-year-old Hannah Banks, who is taken to the tiny town of Sweetser, Indiana to begin life anew.

But all is not right. The story's narrator, Hannah herself, reports "the old familiar feeling of hot tingling darts shooting down my arms and into my fingers." What Hannah will encounter threatens her very life; it is a force from the depths of supernatural horror.

But to help the reader make sense of events, Jane, Hannah's mother, takes over the story. It is 1884, sixteen years before Hannah's arrival in Sweetser. Jane remembers her romance with Jonathan Banks a year before, who took her through the church graveyard where she spotted the marker of the Slaughter family who had lived in a cabin on the outskirts of town.

Daniel, the father, came home roaring drunk one night and burned the place down, killing them all, including his wife, Martha, and young daughter, Emily. Another family, the Spectors, eventually built on top of the remains. Jane is Jane Spector, and she's shaken by this revelation, especially because she's had a "secret friend who's visited me in my room since childhood"--named Daniel. "Spector"; "Slaughter": do not take these names for granted.

Jonathan and Jane fall in love, but Jane's invisible friend, Daniel, is not pleased. Not pleased at all. As Jane tells Jonathan, "I think the Daniel who resides in this house, who wants to keep me, is the same Daniel who killed his wife and child. He is an evil demon." Then comes the voice of Daniel in Jane's head: "I order you to call off your wedding."

Daniel will stop at nothing to keep Jane for himself. The shocking result forms the background to Hannah's own supernatural battles that will keep readers turning pages until the last. 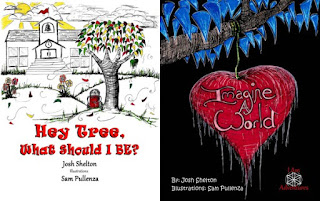 A new series of picture books aims high, aspiring to guide "children both big and small upon a journey through many of life's timeless questions. We intend for these books to send out ripples of joy, unity, and love, while providing subtle support to the ascension and enlightenment of our human family."

In their "'I AM' Adventures," Chicoans Josh Shelton (writer) and Sam Pullenza (illustrator) focus on questions kids have about careers and, given that "our planet's in a jam," how they might make a difference.

The introductory book is "Hey Tree, What Should I Be?" ($14 in paperback from White Magic Books, whitemagicbooks.net, and Conscious Dreams Publishing; also for Amazon Kindle). It begins with a child facing quite a task: "I've been given a whopper assignment/ it's a doozy indeed/ I've got to choose what it is/ I'll grow up to BE!" And no dawdling: "... I haven't the time/ to ponder or wallow/ I'm supposed to figure this out/ and share it tomorrow!"

Well, how about becoming a "professional mud puddle splasher"? The child consults his friend the tree as he sees this isn't realistic. Maybe become an author? He realizes that as time goes by he'll change, just like the tree: "Just days ago/ it clearly wanted its leaves// And today it's released them/ to soar in the breeze." So, finally, he will "let my heart be my guide/ when change comes to call." That is the way to happiness.

There's great change coming, the creation of a global consciousness, and that's the topic of "Imagine A World" ($14.99 in paperback; also for Amazon Kindle). "So strap up your light boots/ Unbuckle your heart/ Free your mind.../ It's 'create-with-our-imagination-time'!" Pullenza's vibrant and exuberant pictures reflect the story's imaginative joy.

"Imagine our seas/ Vibrant and free/ No oil or plastic/ Or wasteful debris"; "Imagine a world/ Where we can visit the stars.../ Play tag on the moon/ And hopscotch on Mars." With love and acceptance, the book asserts, "so it will be!"

An art installation, featuring the tree in the story, is on display through January at Ellis Art and Engineering Supplies on Broadway in Chico.

"Guys Like Me: Five Wars, Five Veterans For Peace" 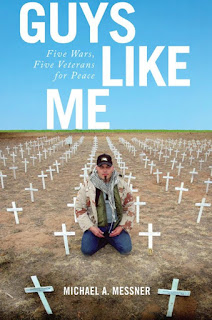 Michael Messner graduated from Chico State University and is now Professor of Sociology and Gender Studies at the University of Southern California. In his undergraduate days at Chico State he "opposed the American War in Vietnam." His father, a veteran of World War II, had "no patience for the antiwar movement."

It was different for his grandfather, who served in World War I. Back in 1980 "I tried to cut through Gramps's cranky mood by wishing him a happy Veterans Day. Huge mistake. 'Veterans Day!' he barked.... It's not Veterans Day! It's Armistice Day.'" The politicians did this, he said: "'Buncha crooks! They don't fight the wars, ya know. Guys like me fight the wars.'"

Messner, though not himself a veteran, was drawn to those connected with an organization called Veterans for Peace. In a sobering new book he interviews some of the vets who were deeply troubled by what they had participated in and who found some measure of healing from PTSD and various addictions in challenging the Pentagon's version of the history of U.S. warfare.

The result is "Guys Like Me: Five Wars, Five Veterans For Peace" ($24.95 in hardcover from Rutgers University Press; also for Amazon Kindle). Messner (guyslikemebook.com) writes an insightful essay on the roots of peace activism, and the interviews--including a World War II Army veteran and a Navy veteran of the Iraq War--are raw and deeply moving.

Included is Gulf War Army veteran Daniel Craig, pictured on the front cover in Santa Fe, New Mexico, amid crosses, displayed by Veterans for Peace, representing U.S. soldiers killed in Afghanistan and Iraq. Activism and "spiritual healing" for Craig, Messner writes, is a way for him to overcome "his anger over having killed people for what he now sees as lies."

To those who thank these veterans for their service, Ken Mayers, a fellow vet and friend of Craig's, replies: "That was very nice of you. But you should know that the things we did when we were in the military, we did because we were told to. This work that we are doing right now--working for peace--this is our service." 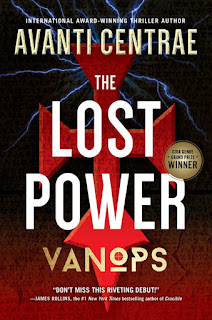 When the twins arrived at their father's Napa vineyard, thirty-something Maddy Marshall and Will Argones wondered what was going on. Their sister Bella had been invited as well. Why all the family togetherness among siblings who had been dispersed far and wide?

Suddenly, a gunshot. The twins' father, the target of a Russian sniper, lives only long enough to speak the words that will propel Maddy and Will into Dan Brownian motion to find a mysterious other-worldly weapon.

"VanOps: The Lost Power" ($16.49 in paperback from Black Opal Books; also for Amazon Kindle), by Grass Valley novelist Avanti Centrae (avanticentrae.com), is a page-turner that takes its protagonists from a medieval Spanish castle to a secret underground city in Israel--and beyond.

Centrae's debut novel is the first in a series featuring VanOps, short for "Vanguard Operations," a top-secret CIA group chartered "to keep an eye out for any sort of advanced or obscure technology that threatened the security of the United States."

Winner of the Genre Grand Prize at the Chanticleer International Book Awards, and a Hollywood Book Festival Honorable Mention, the story is a quest within a quest.

A thousand years ago Ramiro I, the first King of Spain, founded a dynasty that "contributed to, not only the current Spanish ruling class, but also to the royal families of nearly all the other current European monarchies." Ramiro wielded obelisks of amazing power, said to be passed down from Alexander the Great, and said also to be part of the legacy of his descendants, Ferdinand and Isabella.

Maddy and Will are part of that great lineage. She is a world-class athlete, skilled in aikido; he is an engineer. Together they must find those who guard the ancient weapons, and then solve a series of clues to find the weapons themselves, all the time tailed by Russians who seem to know their every move.

They are joined by Teddy "Bear" Thorenson, an old high school classmate with "an embarrassing one-way crush" on Maddy, whom they just happen to run into, and who turns out to be a covert VanOps agent.

Will it be enough to win? Readers will have a thrilling time finding out. 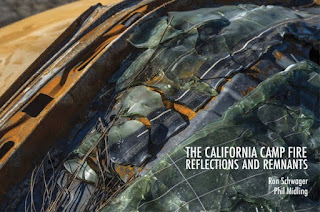 An extraordinary coffee-table book explores the emotional interior of those who survived the Camp Fire and then looks outward at the terrible beauty wrought by the flames and heat. "Monochromatic portraits" by Chico photographer Ron Schwager are paired with fourteen verbatim accounts of those who escaped. Chico screenwriter and novelist Phil Midling writes in the prologue that the images are "beautiful in their simplicity and starkness yet also convey a rich complexity. ..."

Midling, who also provides the epilogue, writes that the second half of the book features stunning full-color patterns, "many resembling paintings of abstract art. Among the piled rubble and cindered ash, Ron was able to extract the images of devastation; contorted remnants and skeletal configurations of heat-fused plastic, steel, and glass viewed through a kaleidoscope of tertiary-like colors--odd hues of oxidized orange-rust, and red-violet, and turquoise-blue embedded within the bleak and grayish landscape."

"The California Camp Fire: Reflections And Remnants" ($45 in hardcover, self-published, from thecampfirebook.com, with local pickup and mail orders available), designed by Connie Ballou, is a masterpiece that will cause readers to pause and reflect with every turn of the page.

A few haunting words from the accounts: "And so we had no other choice but to drive directly through the flames. ..." (Paradise High School coach Seth Roberts, 60); "I texted a goodbye message to my boyfriend who had been calling me because I really didn't think we were going to make it out alive" (Feather River Hospital security employee Tameekah Abdullah, 28). "I remember receiving texts from certain retirement homes. ... We just couldn't get the engine to that location. I knew those residents were about to be burned to death at any moment and there was nothing we could do. And we knew a lot of those people personally" (Paradise fire captain Alejandro Saise, 45).

In the color photograph section, Schwager writes that as a photographer, though he is "drawn to the chaos, my presence seems to be unobjectionable. But amongst the hive of debris removal activity I feel I am treading on hallowed ground. I feel I need to record this in some meaningful way."

He has done so.