"People, Places & Pieces Of Paradise: The Inferno, Aftermath & Recovery From The Most Destructive Wildfire In California History" 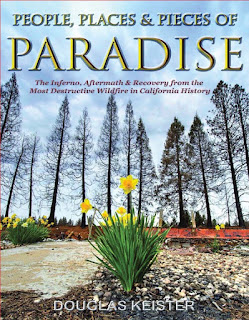 Chico writer-photographer Doug Keister showed up for his morning softball game on November 8, 2018, knowing something was amiss but not knowing the extent of the conflagration that was to come. Several of the players would lose their homes in the Camp Fire.

"In the weeks and months that followed," he writes in an extraordinary new book, "I journeyed to the fire zone of Paradise and nearby smaller communities of Concow and Magalia several times each week, doing my best to document the effects of the fire, on the land and on the people. I also made note of the residents of Butte County who had escaped the ravages of the fire. The generosity they gave--and continue to give--to the community and survivors, still inspires."

Keister has created stunning images that capture the soul of Paradise, from the burning to the aftermath, with stories of survivors telling of the human cost but also of the indomitable spirt of hope that is, indeed, part of the soul of the town.

"People, Places & Pieces Of Paradise: The Inferno, Aftermath & Recovery From The Most Destructive Wildfire In California History" ($29.95 in hardcover, self-published, from paradisebook.org; also available locally at Made in Chico and the Gold Nugget Depot Museum) contains almost 200 color images and 20,000 words.

Sections include "Ignition," "Aftermath," "Recovery," "The Murals" (a comprehensive guide to Shane Grammer's Paradise art), "Portraits From Paradise" (three dozen stories of individuals and families who survived), with a closing memorial dedicated to those who did not.

In the book, Keister writes about the power of the image. "Imagine returning after the fire, turning onto the street where your home once was and seeing…nothing. You feel your heart sinking and your eyes welling with tears. You are struck by the utter silence. No birds chirping. No chattering squirrels. No dogs barking. No squeals of children playing. Nothing is anywhere close to normal. Photographs will tell these stories, if you let them."

Those images are deeply moving (my first school, Paradise Elementary, has disappeared into memory).

The book itself is a treasure.

"As Many Nows As I Can Get" 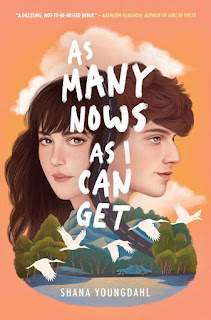 "Scar," a physics major, turns down an offer from MIT and instead will head to Colwyn College in Watertown, Maine. David will head to Stanford. They are Graceville's finest. All the planets seem aligned.

But in physics, gravitational and other forces can set things to wobbling, a perfect metaphor for how Scarlett's orderly life is upended when she jumps with David off the Mine Gulf Bridge into the waters below. "I want to feel everything," David says. "What it's like to be that heron, or those clouds, and to jump off that bridge." After Scar's impulsive choice she and David are in each other's orbit--but orbits decay.

What follows is Scar's account of lives upended by love and death, an emotionally resonant debut YA novel by Paradise native Shana Youngdahl. Now living in Maine, she teaches writing at the University of Maine at Farmington.

"As Many Nows As I Can Get" ($17.99 in hardcover from Dial Books; also for Amazon Kindle) flits in short chapters from Scar's present (a road trip with her Colwyn College roommate Mina) to moments in the previous two years when David's magnetism was irresistible, when Cody moved on to someone else, when the past was a "now."

"The past is not gone," Scarlett writes, "it's just not being witnessed. One flip and I'm headed out on the road with David ten months ago, another flip and I'm in this car with Mina today, another, it's eight months ago, and I'm sweating through college orientation. All these nows happening at once. And if all our nows happen at once, then death--it's just a scavenger hunt through time."

Brilliant student Scar makes life-changing mistakes, David makes a fatal one, and the story, with its electric repartee among friends and spot-on grasp of the lives of these teens, presents Scarlett with the question: Who am I in this now? The answer is not to be missed.

"The Sound Of The Snow Geese: A True Story Of Surviving California's Deadliest Wildfire" 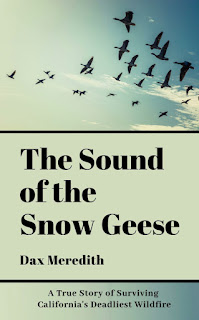 Dax Meredith, the pen name of a Chico State and Butte College instructor, was caught in the Camp Fire as she and one of her young sons fled towarrd Paradise from Magalia. Her harrowing story, including the aftermath with its own trauma, is told in "The Sound Of The Snow Geese: A True Story Of Surviving California's Deadliest Wildfire" ($15.99 in paperback, self-published; also for Amazon Kindle).

"I’m relatively young," she writes, "to have survived the things I’ve made it through so far. To date, these include near death from a virus and secondary infections, extensive nerve damage, long term illness, near death by wildfire, loss of home to fire, relocation, and the post fire list goes on and on." She's also a single mom, bringing up two boys called in the narrative Andy (age eleven) and Tommy (who's nine).

On that fire morning, the author is home with a feverish Andy; Tommy is driven to school in Chico by his grandmother. A little after 8:30 her mom calls, the phone voice crackling. "Huge plume of smoke. Ugly. Maybe plan to evacuate."

Meredith walks outside. "I know immediately that something is different, something is wrong. The skies are an unnatural glow of greens and oranges, and ash is collecting like deathly snowfall on the deck, on the cars, like an ominous dusting of the destruction that has begun."

With Andy and their puppy Harley, she begins driving toward Paradise. Then traffic stops at the turnoff to Pentz.

Soon, "sparks, ash, debris, and huge demonic flames are right there behind us. They don't dance or flicker. They eat everything. ... I can't wrap my brain around it." There will come sheltering in place near the Optimo, then eventual escape.

She is filled with emotion and yet also a confidence in God. Hardships continue afterward, but there are new starts.

Trained as a counselor, the author discusses coping techniques in the last chapter, including identifying triggers, prayer, visualization, music, and more.

The book is a superb and heart-stopping account of the unimaginable, full of honest faith and true grit. When you are ready--read it.

"In Search Of The Canary Tree: The Story Of A Scientist, A Cypress, And A Changing World" 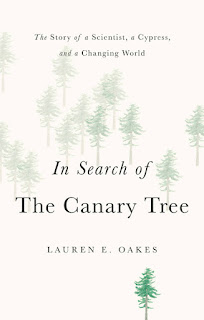 "Some people call it the Alaska cedar," writes Lauren E. Oakes, who teaches Earth System Science at Stanford. "Others call it the yellow cypress. ... Alaskans use the name yellow-cedar." In remote parts of Alaska groves of yellow-cedar are on the decline. Just what is going on had not been documented until Oakes, in 2010, began a years-long research project for her doctorate.

The book that emerged is a nuanced and poignant exploration of the impact of the dying trees. "What I didn't know then," she writes, "was that these dead trees would eventually ... give me a sense of conviction about our ability to cope with climate change. They'd motivate me to do my part. They'd move me from pessimism about the outlook of our world to optimism about all we still can do."

"In Search Of The Canary Tree: The Story Of A Scientist, A Cypress, And A Changing World" ($27 in hardcover from Basic Books; also for Amazon Kindle) has been chosen as the 2019-2020 "Book In Common" for Chico State University (csuchico.edu/bic), Butte College (butte.edu/bic), and the larger community. (Oakes is scheduled to speak at Chico State in April.)

In addition to teaching, Oakes works for the Wildlife Conservation Society. Her book presents the scientific questions she set out to answer in Alaska, such as how to distinguish the normal growth and decay cycles of a healthy forest from the threat to the yellow-cedar species itself.

On some Alaskan archipelagos there is significant yellow-cedar dieback, but that has made room for spruce to flourish. There is grief at the loss, especially among the native Tlingit community, but that leads to questions of how the relationship with the forests will change.

Oakes comes to realize, through dozens of interviews, that the many perspectives she finds (economic, ecological, spiritual) present a complex pattern of how those affected face the loss.

The yellow-cedar is the canary, the early warning that profound change is upon us. The species teaches "that there's simply no imaginable tomorrow ... that could ever possibly nullify the need for unwavering care and thoughtful action today."