"Once Upon A River" 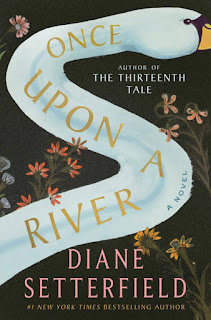 British novelist Diane Setterfield, author of the bestselling "The Thirteenth Tale," returns with a mesmerizing tale about mesmerizing tales. "Once Upon A River" ($28 in hardcover from Atria/Emily Bestler Books; also for Amazon Kindle) considers the central mystery of a child who was dead and is now alive.

I told my wife about the book after I finished it and she seemed mildly intrigued. But one evening recently I read her the first two chapters. She was captivated (and so was I, especially knowing the end from the beginning). Her comment: "I want that book!" We purchased the ebook version and she spent the next three or four days buried in the book every chance she got. She couldn't put it down.

What I realized when I read aloud the two chapters was Setterfield's attention to the sounds of words, something I didn't pick up on as much when I read the galley silently. The book is a big, glorious homage not just to story but to how language can enrapture us, weaving readers into the warp and woof of the events themselves. In such a masterly author, that needs no strong arming. Just an Armstrong.

That's a reference to one of the key characters in the book, a good man determined to find the truth. Blogger Sarah Ullery summarizes the beginning: "In an ancient inn by the River Thames a group of men and women gather on the longest night of the year to tell stories about a 14th century battle that had claimed the lives of eight hundred men. As the stories inside the inn unfold, the door bursts open and a man with monstrous injuries appears in the doorway holding a drowned little girl. The girl has no pulse and isn’t breathing; but hours later she stirs, coming back to life."

The reader will be certain that this extraordinary story will not soon be forgotten.

"The Kingdom Of Dadria: A Lamb Amongst Wolves" 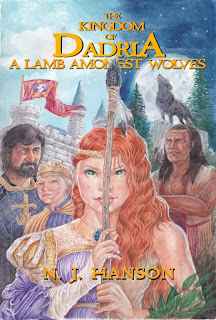 We are not in Kansas anymore: "His human form fell away the same way one might throw off dirty clothes or a snake would shed its old skin. He fell on all fours, thick black fur sprouted all along his body, hands and feet became paws, his face stretched into a muzzle full of sharp teeth. He was no longer a man, he had allowed the wolf to take over."

Many are the mysteries in the Forest of Wayward Souls, not least of which are the Skinwalkers, humans from native clans able to change into Wolf, Bear, Panther, Hawk, a gift of the Great Spirit enabling them to defend against the pale invaders from the kingdoms beyond the forest.

An ancient prophecy says a young wolf warrior who died in battle would return, when his people were in greatest need, "as a wolf with fur red as flame, born to a woman called the Aleutsi, the Great Mother."

The Skinwalkers play a pivotal role in Chico writer N. J. Hanson's riveting sword-and-sorcery epic, "The Kingdom Of Dadria: A Lamb Amongst Wolves" ($17.99 in paperback from Ink Drop Press; also for Amazon Kindle). The cover, by Steve Ferchaud, features red-headed Princess Endelynn of Dadria, the only heir to the throne, soon to be wed to Prince Sedrick of Kahren to unite two great houses. What could go wrong?

Well, pretty much everything. There's a plot afoot instigated by the king of Kahren, Sedrick's older brother Kendrick, to take over the kingdom of Dadria and threaten the peoples of the forest.

Add to the mix the loyal Dadrian bodyguard Sir Aridain, protector of Queen Beatrice (especially after King Cassius dies unexpectedly), skeptical of the planned union; and Sir Darren, "captain of the Black Swords of the King," a man willing to carry out the king's dastardly plan.

A plan that includes the fake kidnaping of Endelynn so Sedrick can show his heroic chops, but things go awry and she finds herself captive of the Wolf Clan. Therein lies the tale, so to speak, full of violent action, narrow escapes, and a promise in the next book for all to be resolved. 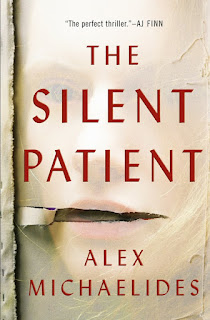 Infidelity pervades "The Silent Patient" ($26.99 in hardcover from Celadon Books; also for Amazon Kindle). Author Alex Michaelides, in his novelistic debut, has written a psychological thriller murder mystery, a story that explores the character of thirty-three-year-old Alicia Berenson, an accomplished painter, deeply in love with her husband Gabriel, who one evening shoots him fatally in the face.

The evidence against her at trial is overwhelming. But Alicia refuses to speak in her defense (if any defense is possible); in fact, she refuses to speak at all. Ever. To anyone. In the end, swayed by the recommendation of Lazarus Diomedes, "professor of forensic psychiatry at Imperial College, and clinical director of the Grove, a secure forensic unit in North London," she is found to have "diminished responsibility" and is sentenced to the Grove under the care of Diomedes.

The novel presents tantalizing excerpts from Alicia's journal but is mostly narrated by psychotherapist Theo Faber, forty-two, who has followed Alicia's trial closely and is determined to help her. He joins Grove's team and Alicia becomes his patient. She remains unspeaking, lashing out violently at times yet never saying a word in therapy sessions (or any other time). The only clue to her inner self is an extraordinary painting she called "Alcestis," a self-portrait painted after the murder.

Alcestis, Faber says, is "the heroine of a Greek myth. A love story of the saddest kind. Alcestis willingly sacrifices her life for that of her husband, Admetus, dying in his place when no one else will. An unsettling myth of self-sacrifice, it was unclear how it related to Alicia's situation."

The connection with Alicia will be revealed, but not before Michaelides, a screenwriter by trade who grew up in Cyprus, has taken the reader (or the listener) on a wild ride with twists and turns aplenty and surprise endings that turn out to be surprise beginnings. I listened to the audiobook version and was struck by the beautifully executed telling from narrators Jack Hawkins and Louise Brealey.

The book is also a study of Theo Faber, whose growing compulsion to get Alicia to speak calls into question his fidelity to professional ethics.

The novel is maddeningly good. 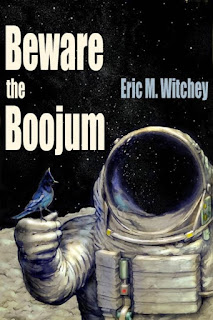 In "The Hunting of the Snark," a nonsense poem by Lewis Carroll, one of the hunters is given a warning: "But oh, beamish nephew, beware of the day,/ If your Snark be a Boojum! For then/ You will softly and suddenly vanish away,/ And never be met with again!"

The Boojum, then, is particularly dangerous; no wonder that Bracken MacFie, stationed on an asteroid named Hope, characterizes his own dangerous work as boojum hunting. And when one is found? Therein lies a science-fictional tale by freelance writer Eric Witchey (ericwitchey.com), a recent Butte College visitor and conference presenter.

"Beware The Boojum" (IFD Publishing; available from e-book retailers including Amazon Kindle) imagines the discovery of extraordinary crystals "from the pre-birth of the universe," made of "pre-baryonic matter."

MacFie holds one in his space-suited hand. "The crystal looked like clear, faceted quartz. Thread-like, golden impurities twisted, joined and radiated inside. Unlike quartz, the pre-baryonic matter was so transparent that every edge teased his eye to strain harder to resolve it. The harder MacFie focused, the more the edges and angles faded away, stretching thinner until the surfaces slipped between the fabric of space-time and hid in folded dimensions where mortal vision couldn't see."

It's "the elusive, crystalline residue of the Big Bang."

It turns out these crystals are the key to human travel throughout the universe. For certain unique individuals, "pilots," holding a crystal can instantly transport a person to a given location. There's only one rub: One must give up one's sanity in order to achieve the result. MacFie's wife, Astra, has become a pilot, pressed into service by the corporate state in the form of project manager Dr. Maxwell Craig. She is also insane. And unpredictable, as is the boojum crystal.

MacFie is a miner of the scarce crystals; he, too, has given up his sanity to do the job, contending with the voice of "Steve" and fending off a scrub jay on the airless asteroid.

In order to open the universe to humans, the transport process must become predictable. Craig embarks on a devious plan that plays on MacFie's love for Astra--but human emotions bring an unexpected consequence in this mesmerizing yarn. 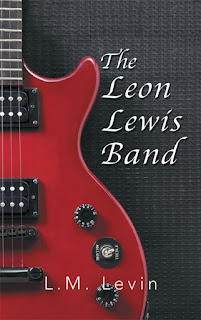 According to an author's note, L.M. Levin (lmlevin.com) "is a Licensed Clinical Social Worker, in private practice" in Chico. Now retired from working almost a decade-and-a-half in adoption services, Levin has completed his first novel. "The Leon Lewis Band" ($28.99 in paperback, self-published through iUniverse; also for Amazon Kindle) is a novelistic memoir told by Jackie Klein about his talented musical friend Leon (Lee) Lewis.

In the 1950s in Brooklyn, Jackie says, "we were a couple of the few Jewish kids in a predominantly Italian, working class neighborhood. I was a quiet, shy boy. Lee, three years my senior, was outgoing and actively engaged in the struggle to gain respect from the other kids on the block."

Anti-Semitism is rampant. Tough-guy Johnny Emilio rules the streets; his lieutenant, Tony Carpissi, is Lee's bête noire who "went out of his way to run up to him, push, shove, and whisper antagonistic things to him." After Emilio is killed in a robbery attempt Tony disappears. He returns later in Lee's life is a most disquieting way.

Lee, Jackie, and others begin playing music together. Then "Lee went off to college that September of 1964. His college was the streets and highways of America, the bars and clubs where he met new musicians and new friends." Two years later he returns to his old stomping grounds, Café Flo in Greenwich Village, eventually forming a touring band attracting more and more attention, including from the authorities because of the outspoken opposition to the War in Vietnam.

The band includes, as Levin's website notes, "a flamboyant country boy, a hippie manager, a smooth café manager, an eccentric concert promotor and recording engineer." Much of the novel recounts the group's travels out West, to Europe, and south of the border. Lee meets progressive journalist Catalina Blake, whose Guatemalan parents managed to escape the political troubles in their home country by coming to the US. Or did they?

Political intrigue mixes with counter-cultural sensibilities in this "good times" memoir. But always there is the music: "Music is the only thing we know," Lee says. "Music is our lives. We do it because we must. That's just the way it is."