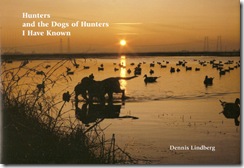 Lifelong rice farmer Dennis Lindberg, born "at home in Richvale" in 1924, was an expert hunter in his time. His experiences form the heart of "Hunters and the Dogs of Hunters I Have Known" ($30 in hardcover from The Community Foundation of Richvale). "These are my memories," he writes, "of hunting upland game birds and waterfowl in northern California and big-game species in Canada, Alaska, Utah, Oregon, and California."

The beautifully illustrated book will be available during this Saturday's Richvale Centennial Celebration at Richvale Park. A pancake breakfast begins at 8:00 a.m. followed by a presentation of Richvale history. Lindberg has lived through most of it.

The book is divided into four parts. "The Lindberg dogs" include Patsy, his favorite, an English Pointer acquired around 1950. "I will never forget the day we were hunting quail in the rock piles left by early-day gold dredgers south of Oroville. When she was a three-month-old pup, I took Patsy along with my older dog so she could experience what was going on. . . . At one point, I suddenly noticed she was carrying a quail in her mouth that apparently had fallen out of my hunting coat. The little bit of retrieve training I had done with her at home had already paid off handsomely. I remember picking her up, hugging her, and giving her words of encouragement for bringing me the quail. As a result, we bonded together unlike any other dog I've had before or since."

The second part features "the dogs of my hunting friends" and the third includes accounts of "guided hunting trips," like the 1962 Canadian adventure in which Lindberg took a wolverine, "the athletic mascot of my alma mater, Biggs Union High School. I had the head mounted and it was placed in the basketball gymnasium."

The last part features contributions from hunting friends; a picture of Greg Stephens' yellow Lab, Clyde, is shown on the cover.

At the book's writing Lindberg and his wife, Charlotte, were celebrating more than six decades of marriage. Hunting is over now, but the author notes that "there may be some truth in the saying I have heard many times: 'A man's time spent hunting and fishing does not count against his time on earth.'" 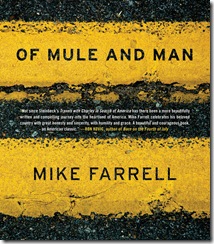 In May of 2008 activist and M*A*S*H alum Mike Farrell embarked on a month long car tour to promote his autobiography, "Just Call Me Mike." Farrell and his wife, actress Shelley Fabares, had been scheduled around the country for book signing events sponsored by local social justice organizations. But just as the tour was about to start, Fabares suffered a mishap and subsequently underwent hip replacement surgery. Rather than cancel the long-scheduled events, she urged Farrell to continue on, solo. He rented a Prius (which he nicknamed "Mule") and he was off.

Farrell's dispatches, which first appeared on the Huffington Post blog, have now become a book, "Of Mule and Man" ($15.95 in paperback from Akashic Books). The author and the Prius became fast friends. "I sometimes refer to Mule as a 'he' and sometimes as a 'she.' That's not an error. Mule is a hybrid, after all, and sometimes he seems to be a he and sometimes she seems to be a she. And I've become accustomed to both.")

Farrell, who was in Chico last September, returns for a signing and discussion at Lyon Books in Chico this coming Tuesday, June 23, at 7:00 p.m. Cosponsored by the Chico Peace and Justice Center and Death Penalty Focus, the talk will highlight some of the ups and downs of the tour and emphasize the human rights issues to which Farrell has devoted his life.

Eventually Mule had to go back to the rental lot. "But I do want her to know," Farrell writes, almost wistfully, "how grateful I am for the way she has taken care of me. How do you say thank you to a critter who carried you 8,882 miles, through twenty-nine states, through deserts and mountains, heat and cold, sunshine and downpour, dancing around tornadoes and floods, all in just under five weeks' time?" 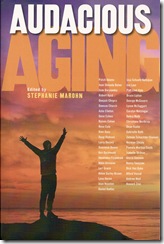 Patt Lind-Kyle, born in 1937, has been a dental hygienist, health science professor, and psychotherapist. Throughout her careers she has honed the art of meditation and writes that "I now have an audacious passion for working with individuals and groups in silence." Her essay, "Building Community from the Inside Out," is included in "Audacious Aging" ($29.95 in hardcover from Elite Books), an anthology edited by Stephanie Marohn.

She writes in her contribution that two decades ago she was hit with chronic fatigue syndrome. Doctors were of little help; "I had to discover how to heal myself. Through many starts and stops, I discovered how to do so by focusing on the physical, mental, emotional and spiritual aspects of my life . . . using meditation to remove the negative thoughts about myself and help bring my body back into a natural balance." "Mind," she writes, "heals the mind."

"Audacious Aging" features more than three dozen chapters, some drawn on previously published sources, some from well-known figures, to help readers, in the words of the editor, "rise to the challenge of transforming our society from a youth/appearance-worshiping culture into one that fosters the values of the heart, supports the evolution of consciousness, and leaves to future generations a legacy of which we can be wildly proud." Contributors include Deepak Chopra, Helen Gurley Brown, George McGovern, Andrew Weil, Gloria Steinem, and Patch Adams (described as "a political activist for ending capitalism and creating a value system based on compassion and generosity.")

Lind-Kyle writes that meditation can help "change habitual patterns, reduce stress reactions" and enable those "sitting together in silence" to create trust and "build a community of heart from the inside out." (Her forthcoming book is called "Heal Your Mind, Rewire Your Brain.")

Though I'm less sanguine than the editor about the transformative potential of the approaches chronicled in the book, I imagine readers will agree with Marohn when she writes that "many baby boomers thought the revolution would take place in the Sixties. Now they are awakening to the reality that it may take place in their sixties!" 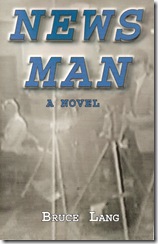 Bruce Lang's long career in television and radio news includes a stint at KHSL-TV, Channel 12 in Chico, where (according to Wikipedia) he was news director from 1986 until 2003. So when Geoff Mann, the central character in Lang's new novel, "Newsman" ($18 in paperback from Klamath Press), takes a job as news director for a similar station in Northern California, it's tempting to play the match game. Which fictional characters are based on real-life persons?

Indeed, in some cases the correspondence is apparent even to outsider observers. The fictional KTBK's Chief Meteorologist is one Wendell Lumpus, "an excellent weatherman. . . . He was very knowledgeable about computers, long before it was fashionable, and devised computerized weather graphics for many television stations around the country." But "Lumpus seemed to have no sense at all how his comments might affect fellow workers or members of the public, and would be genuinely surprised at their reaction." There are other characters of similar wattage, and Chico insiders may revel in the snarky references.

Readers can be forgiven this diversion since the book reads like a memoir disguised as a novel, replete with Mann's dark thoughts about egos in journalism; young, attractive reporters and why they're so abundant in television; penny-pinching owners; and the triumph of quantity over quality in broadcast news. "It used to be people were valued for what they knew," Mann muses; "now they were valued for what they thought. Opinion became more important than knowledge."

The story traces Mann's career, beginning with work at a weekly tabloid sometime in the mid-1970s in the coastal town of Founders. Mann eventually moves to radio news, then to a Founders television station, and finally to the valley town of San Ide (home of San Ide State University) and KTBK.

Along the way Mann is manifestly unlucky in love, married for a time, going through a succession of girlfriends, haunted by a mysterious female voice asking for help. Stress produces heart palpitations, an old friend takes his own life, and he is forced out as KTBK news director when the station merges with another in San Ide. The mood is bleak, the sex oral, the language foul. For the author, it is the story of America in decline. 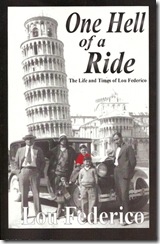 "One Hell of a Ride: The Life and Times of Lou Federico" ($24.95 in paperback from Adventure Publishing) is replete with black and white photographs. In a letter he writes that "I lived in the Chico area for many years during the waterfowl seasons, starting in 1967. . . . I am an outdoorsman and entrepreneur who pioneered Baja, California, in the 1960s and 70s in order to build resort hotels." He became friends with John Wayne in the last days of his life and remembers that in 1961 his Club Aero Mulege fly-in hotel was popular with influential Chicoans. 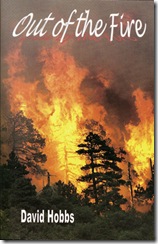 Marysville-Yuba City resident David Hobbs became a Christian in 1974 after quite an extraordinary pilgrimage, told in "Out of the Fire" ($15 in paperback from 4L Press). According to a news release, Hobbs worked for the U.S. Forest Service fighting fires starting in his college years. He "spent four years on helicopter crews, two years on tanker crews, and two years on the elite Rogue River Hotshots. He was also in the first group of college students busted for drugs at Humboldt State University . . . and spent the 'Summer of Love' (1967) in the drug scene in Berkeley." 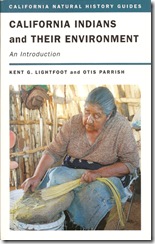 UC Berkeley anthropologist Kent Lightfoot, and Otis Parrish, a member of the Kashaya Pomo Tribe, have just published "California Indians and Their Environment: An Introduction" ($19.95 in paperback from University of California Press). New research suggests "California Indians lived in vibrant polities" practicing prescribed burning. Not all was paradise. The authors note that "we have good evidence that in some times and places Native peoples experienced poor health and hardships brought about by periodic food shortages, parasites, endemic diseases, violence, warfare, and political manipulations." Lavishly illustrated with detailed accounts of how the Konkow, Maidu and others used plants and animals.