"Book in Common" author: Harnessing the wind, and thankful for libraries 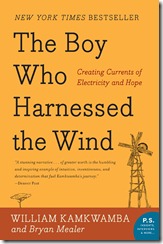 In December 2000 the floods came to Malawi. But that was not the worst of it. The water disappeared and drought set in. The maize crop was stunted. In late January 2002 “the hunger” came to Malawi and starvation with it. William Kamkwamba's parents and sisters (now half a dozen) barely made it through. There was no money to send the teenage William to school; he seemed destined to be a poor farmer for the rest of his life.

That is, except for an insatiable curiosity about mechanical things, and for a nearby library--really just a few shelves. The books about windmills planted an idea. Just a few years later William (williamkamkwamba.typepad.com) found himself on the international stage, with a Twitter account.

He and co-author Bryan Mealer (a former AP reporter) tell William's extraordinary and heartening story in "The Boy Who Harnessed The Wind: Creating Currents of Electricity and Hope" ($14.99 in paperback from Harper Perennial; $9.99 in Amazon Kindle and Barnes and Noble Nook e-book formats; $27.99 unabridged from Harper Audio).

The audio version, ably voiced by actor Chike Johnson, makes William's excitement palpable in discovering how a bicycle "dynamo" works and how "electric wind" might power a house. William is an optimist, even in the midst of famine. Science captures him; traditional magic knows nothing of circuit breakers.

"My parents had raised us to be churchgoing Presbyterians who believed God was the best protection. Once you opened your heart to magic, we were taught, you never knew what else you might let inside. We respected the power of juju, even feared it, but my family always trusted our faith would prevail."

In 2006 some Malawi officials were “inspecting the library at Wimbe Primary when they noticed my windmill.” The story spread, and it eventually came to the attention of the program director of TEDGlobal 2007. TED stands for “Technology, Entertainment and Design,” and its conferences feature “scientists, inventors, and innovators with big ideas.”

William's windmill, cobbled together from scrap pile parts, is one such "big idea." One day, he hopes, it will change the face of Africa.

Kamkwamba is scheduled to speak in Chico this coming April as part of the 2010-2011 "Book in Common" program (www.butte.edu/bic or www.csuchico.edu/bic). 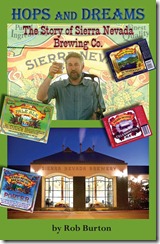 Monday marked the thirtieth anniversary of the company Michael J. Lewis--professor emeritus of brewing science at UC Davis--describes as "the most perfect brewery on the planet." Lewis was interviewed by Chico State University English professor Rob Burton as part of Burton's three-year research project that has borne fruit as "Hops and Dreams: The Story of Sierra Nevada Brewing Co." ($19.95 in paperback from Chico's Stansbury Publishing). It's a layman's romp through the brewing process and, more importantly, through what was brewing in Ken Grossman's mind when he arrived in Chico in 1972 in a blue Volkswagan bus.

Divided into five chapters, the book surveys beer history, the history of Sierra Nevada (including the never-ending pursuit of "hop harmony") and the guiding lights of "People, Planet, Profit" that make the company's principles applicable in wider contexts. Along the way Burton addresses some of the challenging times, from weathering the craft brew "bubble" of the late nineties, to Ken Grossman's buyout of business partner Paul Camusi; from the tragic death in 2007 of Steve Harrison, "the first employee to be hired by Grossman and Camusi in 1981," to fending off outside interests.

Yet it's also an optimistic story of a microbrewery that "turned its flagship brew, Pale Ale, into the number one craft beer in the country, changing the tastes of a generation of beer drinkers who had grown up with sugary, carbonated, bland lagers. . . . The company soon acquired a national reputation for its cutting-edge conservation policies: recycling more than 99 percent of its production waste and byproducts and reusing spent yeast, hops, grain, carbon dioxide, wastewater, and heat."

Burton adds a series of "taproom conversations" in which he learns a life lesson about "flocculation" (you've got to get the yeast just right). He celebrates beer as "liquid bread" (it's "highly nutritious, high in fiber, low in fat and cholesterol") that, as one brewer puts it, "subtly reminds me, with every sip, how lucky I am to be alive, surrounded by beauty and good people, and living right here, right now." 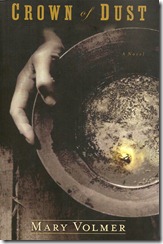 Bay Area-based Mary Volmer was born in Grass Valley, and in her first novel she draws on the gold rush heritage of the area to tell the story of a little outpost called Motherlode, just this side of Rough and Ready and not that far from Nevada City. Millard Fillmore may be running for President, but the Queen of Motherlode is a woman named Emaline, plump proprietress of the Victoria Inn who prostitutes herself during the week and insists everyone show up to the chapel Sunday mornings to hear Preacher John, who is usually sober, at least then.

Then young Alex rides into town. Alex--Alexandra--is dressed as a young man; her parents dead, she is fleeing from her Gran, a woman with precious little tolerance for youthful desires and no compassion when those desires result in tragedy. So Alex is running away; she fools the gaggle of characters who frequent the tavern until one day, exploring an abandoned mining claim, she finds a gold nugget.

Lyon Books in Chico will host a free literary event with the author on Tuesday, November 16 at 7:00 p.m.

Volmer probes deeply. "Crown of Dust" ($24 in hardcover from Soho Press; $9.99 in Amazon Kindle e-book) is a brooding, compulsively readable tale of identity lost and won.

Alex grows restless maintaining her ruse. A man named David Trellona has entered the picture, "fresh out of Cornwall and thinkin' he knows more about mining than those Empire folks over in Grass Valley." If Alex has complicated feelings for David, David's feelings for Alex are even more complicated.

Yet, as Alex thinks about nature, "the camouflage, the deception, it was ubiquitous. A praying mantis posing as a branch, a moth holding motionless and leaf-like, a red water snake basking in the sun, impersonating river mud. She marvelled at the relief she felt at this revelation, as though nature had somehow exonerated her for posing as someone, something she was not." But relief does not last. A reporter comes to town, suspicious that Alex might be the Boy Bandit. And is Emaline protecting Jed, a runaway slave? Bullets will fly, and death will come to Motherlode. But through that death, Alex will find some small measure of redemption. 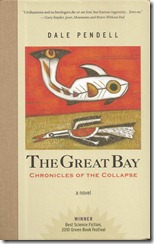 Dale Pendell is not only a contributor to the Huffington Post; he also achieved cult popularity with the Pharmako trilogy ("an encyclopedic study of the history and uses of psychoactive plants and related synthetics"). A proponent of what his website (dalependell.com) calls "wild mind," he has been deeply influenced by "poet Gary Snyder, Zen teacher Robert Aitken, and philosopher Norman O. Brown."

Now the Sierra foothills resident traces the ecological history of California for the next ten thousand years in a new science-fiction novel, "The Great Bay: Chronicles of the Collapse" ($21.95 in hardcover from North Atlantic Books; $9.99 in Amazon Kindle and Barnes & Noble NOOK e-books). In 2021 a pandemic destroys most of the world's population, brought on, it's said, by weaponized bugs from the Americans and the Chinese.

"By 2031, ten years after the Collapse, the population of the United States had stabilized at four million." Carbon dioxide emissions from now-defunct factories had triggered a vast chain reaction. Global warming, and the rising oceans, would change the face of the world.

Pendell is scheduled to be in Chico tonight at 7:00 p.m. for a book signing and discussion at the 1078 Gallery, 820 Broadway. The free event is sponsored by Chico's Lyon Books.

The novel uses maps, travel journals, poetry, interviews, and news accounts to flesh out the human response over the course of millennia. Each chapter begins with a "panoptic," an overview focusing on the social and climate changes reshaping California.

As declarative sentences multiply, it's evident that the remaining humans are somehow surviving in small, do-it-yourself communities. In an address in 2171 to the Berkeley Scholar's Guild on "Pre-Col Society" one historian notes: "It was called democracy but it wasn't at all what we mean by that; it was really an oligarchy. Representatives weren't even required to do what the people wanted them to do."

In the years 2121-2220, "twenty feet of water lay over Sacramento. . . . The Sacramento Valley had become a great bay, already stretching 125 miles from the Sutter Buttes to Modesto. . . . A tallow industry developed at Chico, producing candles. Tanbark and hides were floated to Santa Cruz, where locals operated a tannery."

People followed Earth's rhythms, not the other way around.