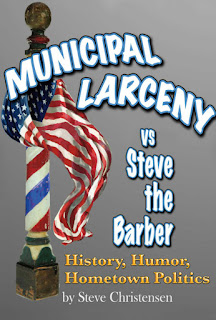 "I am now in my sixtieth year of standing behind the iron chair," writes Oroville barber Steve Christensen. He adds: "After eight weeks of social distancing because of Covid-19, I decided to try my hand at writing a book."

The result is a compendium of Oroville and personal history, barbershop wisdom, and stories of Christensen's political involvement as a kind of local government gadfly.

In his estimation local government needs reining in from illegal property grabs which are detailed in "Municipal Larceny vs. Steve The Barber: History, Humor, Hometown Politics" ($14.99 in paperback from BookBaby; also for Amazon Kindle). "Opinions of the author," he writes, "are based on observations and occurrences.... Probably, a few times, the secret agreements which were not intended for public consumption were accidentally leaked within earshot of the barber chair."

Two themes stand out. In the midst of appearing in front of the Oroville City Council, letters to the editor (some containing "a little barb"), lots of research, and the fight over the Utility Users Tax and other issues, Christensen comes across as good natured, convinced but open to being convinced.

The second theme is Christensen's resistance to the city charging for services its employees would perform in the line of duty anyway. Back in 2012, he writes, "I did not know that if an on-duty fireman conducted an inspection at a business, the City had the option to charge that business for the time the fireman spent performing his task."

"My logic told me if the fireman was responding to an emergency, conducting an inspection, washing a fire truck, working out in the gym, or relaxing in the city hammock while on duty, his pay was exactly the same.... The fee money derived for the fireman's time spent does not go to the fireman, it is extra money for the city. I called it Municipal Larceny."

Christensen has survived, and so has his beloved Oroville. He notes that "the first thing they teach you in Barber College is to never say whoops." Readers might infer that if a few more city officials had said it, the book would have been much shorter. 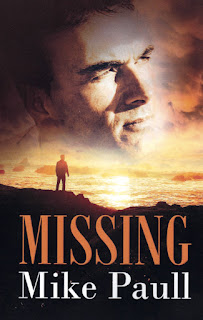 Chicoan Mike Paull, a retired dentist and licensed pilot, is the author of a trio of mysteries featuring Bret Raven, who just happens to be a dentist and licensed pilot. In his new book he's crafted an international spy thriller that takes the reader into Iraq just after the death of Saddam Hussein on December 30, 2006. A small group of Americans from "the Agency" has a lead on the rumored gold hoarded by Saddam and now hidden--somewhere.

"Missing" ($15.95 in paperback from Wings ePress, Inc.; also for Amazon Kindle) tells the tale mostly through the eyes of forty-something flawed family man Craig Cooper, who lives with his wife, Fran, and their ten-year-old son Josh in Virginia. "Coop," as he is known, struggles to be a good dad and husband, forever promising to give up his dangerous missions yet being sucked back into them, even after the Iraq gold quest goes terribly wrong.

Coop and Randy Nichols ("the station chief for the American Intelligence unit in Baghdad"), along with an interpreter, meet a mysterious man named Mustafa in Sadr City ("the body bag capital of Iraq"), who may know something about the gold. But then a sniper kills Mustafa and Coop is shot in the back. "He reached around to tug at his shirt; it was wet and sticky. ... He dropped to his knees, looked at his blood-soaked hand and fell face down in the dirt."

Yet Coop survives. Ten months later, back at the Agency, Randy, now Deputy Director, is pressured to assign a reluctant Coop to revisit the failed mission. Josh is crestfallen; it's the last straw for Fran; and truth to tell Coop has a score to settle with whomever tried to kill him in Iraq.

Coop's small team includes Zoe Fields, in her early forties with "the angelic look of a college-girl, but underneath it she was as tough as nails."

She will need to be; both of their lives are threatened as they unravel the mystery and confront unexpected treachery. It's a nail-biter with the stakes ramping up from chapter to chapter as the two discover far more than they bargained for.

Get the book and root for Coop.

"The Tattoos Of Chico" 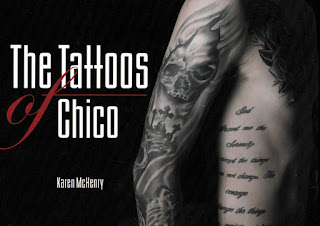 At a Chico gym, Karen McHenry writes, she saw "person after person walk past with tattoos on their arms, legs, and elsewhere...." Intrigued, she interviewed nineteen people. "Many had suffered loss and pain and commemorated their strength in the tattoos they chose. A few became 'addicted' to adding art to their bodies. All of them are admirers of ink and the way it enables them to carry their stories on their skin."

With photographer Sean Martens, she has published a stunning look at "The Tattoos Of Chico" ($24.95 in hardcover from Stansbury Publishing) celebrating not only those whose tattoos tell a story, but the artists who applied in the ink.

Dolores (only first names are used) found solace, after the breakup of a difficult relationship, in a large and colorful peacock tattoo on one side of her body. It "took a total of three months to complete--twenty-one and a half hours in all--three hours for the outline alone." The artist was Ben Lucas from Eye of Jade Tattoo in Chico. Dolores found that "other people's reactions ended up being important."

The book's cover features a detail from RJ's tattoos reflecting the artistry of Joe Sanchez of Exclusive Tattoo in Chico. "What about tattoos is so addicting? RJ answers: 'I like standing out, being individualized with art--this tattoo, this artist. I enjoy having the art on my body. It's an expression of who I am.'"

Some tattoos are impulsive, as when Xavier asked artist Joey Sanchez at True Ink Tattoo in Chico for a tattoo on the roof of his mouth.

Other tattoos are more reflective. Angel had reconstructive breast surgery after a double mastectomy; Dr. Emily Hartmann was able to take Angel's tattoos of a dragon and scorpion (from artist Juan at 12-Volt Tattoo in Chico) and, using the issue, moved them to her breasts.

The book ends with the story of David Singletary, co-owner and artist at Sacred Art Tattoo in Chico, written by Caitlin Forisano. Stop by, David says, "'keep the tradition alive ... because, we tattooed your parents....'"

If a picture is worth a thousand words, there are lifetimes to explore in this compilation of Chico ink.

"Checklist Complete: Stories From My Life In Aviation" 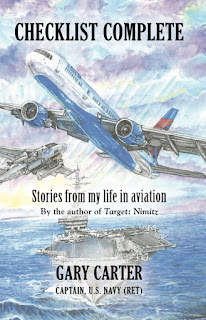 Orland resident Gary Carter, retired Navy captain and former Delta Air Lines pilot, has a tale to tell. Actually, about fourteen of them, stories from his career in the military and his years in commercial aviation, all contained in a new memoir.

"Checklist Complete: Stories From My Life In Aviation" ($16.95 in paperback from booklocker.com/books/11717.html; a PDF version is also available) is replete with photographs provided by the author.

One image is a publicity shot taken in 1980 of four S-3 jets "in a diamond formation (I'm number 3, the left wingman) flying by Mount Rushmore...." This was when Carter was a pilot trainer in "the navy's S-3A Viking Fleet Readiness Squadron, located at Naval Air Station North Island in San Diego...."

Over a long career he would chart more than 16,000 flying hours. In that regard he wryly notes: "As is often said about aviation, experience is a hard teacher. First comes the test, then the lesson."

As a Midshipman Fourth Class (a "plebe") in 1970, he is aware of the hierarchy when groups gather for meals at the U.S. Naval Academy. Plebes are "society's lowest form of existence" and answerable to pretty much anyone else.

When it came to passing food, up the chain it went with plebes getting the remains. Until one night Carter "took a scoop of applesauce, for some tragic and unexplainable reason, and then started to hand the bowl to my classmate beside me." A little infraction of cultural norms? Hardly: "The heavens parted, the world erupted, fire and brimstone engulfed me...."

Carter lived to tell the story, and many more besides, such as how a starter problem in the S-3 Viking was solved with a bent paperclip; being chewed out with unrelenting profanity (not spelled out in the book) by his two military bosses when a message Carter sent went astray; a lunch that cost $3000; and his brief encounter with Vin Scully when he piloted for Delta.

Full of self-deprecating humor and technical talk (with acronyms explained), the book fittingly concludes with some of Carter's "lifetime maxims," including: "Never be out of airspeed, altitude, and ideas as the same time." Check!