A Wolfe in the fold: Chico State professor photographs his life 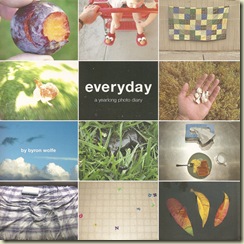 Byron Wolfe is not only an associate professor of photography at Chico State University, he is also a collaborator on two books, about the American West and Yosemite, that document the extraordinary project of shooting contemporary images from the exact vantage point, season, and time of day of classic phonographs half a century or a century old.

But even in these majestic works it's clear that Wolfe is also attracted to some of the flotsam and jetsam left along the trail: a candy wrapper or a piece of plastic from a child's toy. They are part of history as well, and that got him to thinking. He asked his students to take a daily picture of ordinary life. And he decided to do the same thing himself.

"Every day between my thirty-fifth and thirty-six birthdays," he writes, "I tried to make at least one complete new and compelling photograph. The idea was to create a narrative that was attentive to place, change, and the meandering pace and flow of life." Now, half a decade later, the pictures have been collected in "Everyday: A Yearlong Photo Diary" ($29.95 in hardcover from Chronicle Books). His two young sons appear often, but, "because the pictures were mostly about the world that my wife and I inhabited, we were rarely visible in them."

Many of the pictures, displayed chronologically, have short captions; others stand by themselves. A couple of times Wolfe's camera failed; at other times he gives us a small gallery to represent the day, such as images of five of his father's trees bending under the weight of the snow two days before Christmas. There are pictures of spilled milk, chicken eggs, children sleeping, burnt toast and blood. With small children in the house, and a dad who is not the best gardener, there's likely to be blood.

Some of the images are far from prosaic, like the world contained in a drop of water on Wolfe's Weeping Santa Rosa Plum tree. There's the image of a TV showing the President announcing the war with Iraq on March 19, 2003. The face of the president is blocked by the silhouette of a young boy gazing at the news.

"Everyday" is the stuff of life.

Posted by Dan Barnett at 6:41 PM No comments:

Yosemite as you've never seen it, through the lens of Chico State University's Byron Wolfe 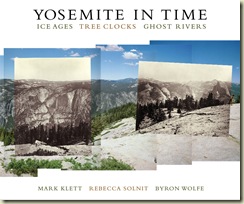 "Yosemite in Time: Ice Ages, Tree Clocks, Ghost Rivers" ($29.95 in large-size paperback from Trinity University Press) is the just-released softcover version of a book first published in 2005. It's an extraordinary "rephotography" tour, courtesy of Byron Wolfe, Associate Professor of Photography and Digital Imaging at Chico State University, and Mark Klett, Regents Professor of Art at Arizona State University in Tempe.

What is rephotography? According to Rebecca Solnit, a San Francisco-based writer who contributes three major essays to the volume, "by standing in the same place at the same time of day and year (which is necessary to get the angle of the light right) you return to the site of the photographer's choices--how he went onto the very lip of a cliff, what he chose to crop out and what he chose to show of the landscape. . . ." The photographers in this instance are Carlton Watkins and Eadweard Muybridge, who photographed Yosemite in the 1860's and '70's; Edward Weston (1973), and Ansel Adams (mid-twentieth century).

Klett and Wolfe have taken their own stunning panoramas from the present day and overlaid them with precisely aligned images from the earlier photographers. The "Four Views from Four Times and One Shoreline" shows Lake Tenaya in 2002 with black and white photographs from Muybridge, Adams and Weston. The hills and mountains have changed little; the shoreline itself, once studded with boulders and trees, is smooth. It's as if little holes in time have opened up, and the reader can gaze in awe at what once was.

Solnit, winner of the National Book Critics Circle Award for Criticism, writes that "truth is like rock. But meaning is like the pines." In her essay on the "politics of the place," Solnit notes John Muir's vision of the Sierra Nevada as forever "virgin wilderness . . . a place apart . . . a place hitched to everything else in the universe except other people. . . . But a century later Muir's vision needs radical revision." The book explores just what that new vision might be. Truth endures; meanings change.

The writing is superb, the photographs high art with just a touch of whimsy: Yosemite in all its glory.

Posted by Dan Barnett at 6:40 PM No comments:

A politically-incorrect memoir of undergrad days at Chico State University 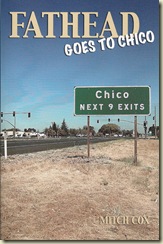 In 1978 Mitch Cox left Cal State Northridge and headed to Chico State University. Little did he realize some of the best days of his life were just ahead. He was a self-described goof and all-around "fathead," and yet maybe not so dumb after all. He eventually he returned to the university to become Assistant Director of Athletics.

His story is told in "Fathead Goes to Chico" ($14.95 in paperback from iUniverse), a rude and crude account of hijinks and heartthrobs told in frat-boy style without the frat. Cox the writer slightly alters the names of real people and pays more attention to the humor of the situation than to the exact historical details. The reader is given a series of comic vignettes as "Poo" (short for the hated nickname "Mitchiepoo") transmogrifies into "Mitchell Shawn Cox" at his graduation.

Cox will be discussing his book at the Chico Barnes and Noble store this Saturday afternoon from 1:00 - 3:00 PM.

The author proves himself a thoughtful sort. One November, outside the dorms, "it was still sunny and nice so there were people everywhere throwing the Fris or just catching rays. I was . . . facing Lassen Hall, when I saw her coming. She was riding this beat up old bike down the walkway and as she passed, our eyes met. . . . Her hair fell over her left eye in an incredibly sexy fashion, she smiled, and that was that. Like a ghost . . . she disappeared inside Shasta." No one knew her, so Mitch figures she's visiting a mystery boyfriend, and that leads to "Mitch's Mystery Boyfriend Theory":

"If there exists a female that you're interested in, and if that female is not interested in you, and if you ask said female out, and if she says, 'No, I have a boyfriend,' then that boyfriend's name will be Cliff, Bret, Chuck, Rick or Kyle and not Herman, Myron, Fred, Harold or Irving." You'll never see this boyfriend, the theory says, "but since you can't prove he doesn't exist, you're hosed."

There are tales of roomies having sex while Cox is trying to sleep a few feet away, and practical jokes, and women, and good friends, and women. "Fathead" rules!

Posted by Dan Barnett at 6:38 PM No comments: 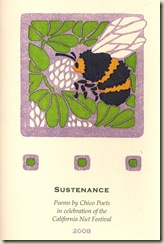 In honor of Chico's California Nut Festival, held in February, Lyon Books of Chico sponsored a poetry contest. Owner-manager Heather Lyon writes that "participants were asked to submit poems that 'relate to nuts, other local crops, or bees or other pollinators.' Adult and child poets submitted poems." Lyon tells me she was so pleased with the submissions she decided to publish them all in "Sustenance: Poems By Chico Poets In Celebration of the California Nut Festival" ($7 in paperback from www.lyonbooks.com).

It's a lot of fun. The 31 submissions are divided into "thoughtful poems" and "humorous poems," with three entries by young people (Jane Hogan, Robbie Barber, and Madeline Chinchay). Lyon notes that "Jeanne E. Clark, creative writing faculty at Chico State University has four poems included in the volume. Judge Beth Spencer of Bear Star Press chose Clark’s poem 'Almonds' as a notable work." Previously published poets are represented, including Audrey C. Small, Joy Harold Helsing and Patricia Wellingham-Jones, but many of the submissions are from newly-published writers.

The poems can only be sampled with a few short excerpts. Clark, in "Almonds," writes of "Flatbed trucks stacked five high with white wooden boxes. These hives. // Sleepy bees, suspended in smoke, careen in the orchard." Judith Ellen Anderson has "Bees Under the Kitchen Window": "Next I called the honey people, making a lovely offer. / Lively swarm of bees: Free for the taking. / But no one answered - and no one took the free bees. // So now we've made our peace. . . . "

Helsing notes that the "Bees Are Disappearing": "I think / some bees found their way / into a different dimension, / a parallel universe / they like better, / and the buzz is spreading."

Reed McGuffy, another of the prize winners, tells the tale of "The Tree & Bee & What It Means for You & Me." The tree invites the bee; and the bee buzzes in reply: "Yer zzent iz juzz delizzuzz / An' yer blozomzz zo divine / I thinz I like yer offer, / I thinz I like't fine! // And so the two had Congress, / The Tree and tiny Bee, / And from that merry union / Come Nuts for you and me."

Posted by Dan Barnett at 6:36 PM No comments: