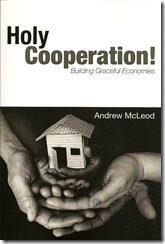 The carols proclaim Jesus Christ, the God-Man, has come into the world. What are the economic implications for the way we live with each other? One writer says it's about cooperation.

Andrew McLeod, a recent Chico visitor who works for the Davis-based California Center for Cooperative Development, explores the Biblical roots of cooperative living in "Holy Cooperation! Building Graceful Economies" ($17 in paperback from Cascade Books). McLeod writes that he became a Christian as a teenager but "lost interest in religion" in his college years. He even began to see the Church as a hindrance to the kind of democratic managed organizations he was becoming interested in, such as the New Riverside Cafe in Minnesota, a vegetarian restaurant he and almost thirty others co-owned.

Yet McLeod began to realize that some of what the Bible said about community supported his interest in cooperation. He noticed the "blossoming interest in community building" within the "primarily evangelical churches" he has been attending. That led to the development of a Web site (www.bookofacts.info) and his book.

He recognizes that "Christianity and cooperatives have much in common, but they are not identical, and any attempt to bridge those differences should not gloss them over." Though he is admittedly not a theologian, McLeod finds a provocative picture of cooperation in the Old Testament in the prophetical call for justice within human society. In the New Testament Gospel stories Jesus talked about loving one another, using one's worldly resources to help others in need. The early believers shared what they had for the good of the community and operated with decentralized leadership.

McLeod's book is not without controversy. "The United States' wealth is the result of centuries of injustice," he writes, "and some atonement for that is necessary" including finding ways "to make do with less. . . . The Bible clearly shows that God would prefer that we organize ourselves in ways that share power and resources much more broadly than our capitalist empire allows. . . ."

Examples include the Mondragon cooperative system in the Basque region of Spain, the Jesus People USA movement, and offshoots of the "new monasticism" such as the Church of the Sojourners in San Francisco's Mission District.

Christmas is here. How, then, shall we live?

New novel has a Chico connection 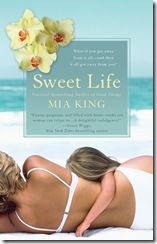 Darien H. Gee is married to former Chicoan Darrin Gee. Some years ago the couple moved to Hawaii where Darrin operates the Spirit of Golf Academy and Darien (writing under the name of "Mia King") balances life as a mother of three with her growing reputation as an author. Her romantic stories tell of modern love, won and lost and won again, and are leavened with a love of food and a special recipe section at the end.

"Sweet Life" ($14 in paperback from Berkley) , featured by several book clubs, is a hearty confection. Paul and Marissa Price both have good jobs in New York. He's 44, she's 41, and daughter Pansy is eight. When Paul gets the opportunity to manage a company-owned resort on the Big Island of Hawaii, he paints a glowing picture of Paradise to a reluctant Marissa. Eventually, realizing she's being selfish, she gives up her job as a consultant and agrees to the family move.

But Hawaii turns out to a bit short of idyllic. When Marissa meets Paul's young and voluptuous secretary, Malia, her suspicions are raised, and she has a hard time adapting to the role of a stay-at-home mom living in a many-roomed fixer-upper house. Marissa has a rather frosty encounter with the company masseuse, Kavena, and her only friend seems to be Jane, the barista at the local Kava Java shop ("a ten-dollar-an-hour glorified coffee waitress who was sixty years old"), who sets Marissa down and says, "Spill!"

When Paul tells Marissa (on Valentines Day, no less) that "I just need to find myself" and asks for a trial separation, her world is upended. Divorce? But, as King reminds readers, things are not quite what they seem, especially when Malia, Kavena and Jane end up renting some of the rooms in Marissa's house to help her stay afloat. And so begins a transformation in Marissa's life.

Marissa not only finds herself, but more than she bargained for. The central theme of "simplicity" runs throughout the novel. "All her years with Paul," muses Marissa at one point. "They hadn't been bad years, just busy years. Too busy, maybe. Too busy to notice the good things."

It's a sweet story (with a bit of salty language) seasoned to perfection. 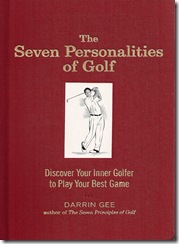 Though now living in Hawaii with his family, Darrin Gee writes that he grew up in Chico, attended Sierra View Elementary and Bidwell Junior High and graduated from Pleasant Valley High School. An expert in "mental golf," he operates the Spirit of Golf Academy on the Big Island. His new book is "The Seven Personalities of Golf: Discover Your Inner Golfer to Play Your Best Game" ($17.95 in hardcover from Stewart, Tabori & Chang).

Gee bases his list on his own observation and is careful to add that "there are more than just the seven generalized personality types" and that "the individuals mentioned as examples of each personalty type are not necessarily solely and totally defined as such. In other words, this is all in fun." But it's fun with a purpose. Each chapter is devoted to one of the types, complete with a "golf profiler" questionnaire, a list of the type's strengths and weaknesses, and how those players with different types can make use of the type in question to better their game.

Take the Gamesman, exemplified by Lee Trevino. "He approaches each shot as if he's on the craps table in Vegas. . . . It's not the money. It's about the thrill." The Gamesman may be easily distracted, but is fun-loving and goal oriented. How does this help a non-Gamesman? Gee noticed that one client, Erin, was so caught up in making the perfect swing that "her stomach would literally ache" if it wasn't. Gee told her to "stop playing standard stroke play and play 'Hit till you're happy.' In this game, she could hit as many shots from the same place until she hit one that she liked." Eventually she put aside the intricacies and just played the game. Erin began "to hit her first shot exactly the way she wanted."

The book is illuminating, even for non-golfers, in part because golf is like life. You gotta bring the right personality to it. 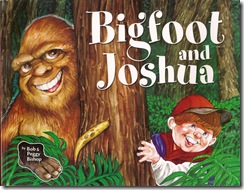 Bob and Peggy Bishop of Orland have not exactly met Bigfoot, but they can dream, can't they? What they have done is write a colorful story for kids ages four through eight called "Bigfoot and Joshua" ($9.95 in paperback from www.bigfootgifts.com). The story features full-color illustrations by the inimitable Steve Ferchaud of Paradise.

According to an authors' note, Peggy Bishop "is a retired kindergarten teacher" and Bob Bishop "has created and distributed Bigfoot souvenirs/gifts for more than twenty years." When I accessed it, their Web site was a work in progress, but offered not only the book but a "Bigfoot lives" pin and decorated shot glasses.

The story begins with young "Joshua, his sister Emily, and his Mom and Dad . . . going on a camping trip to the mountains." Camp setup is fun, but "that night Joshua told his family that Bigfoot lived in the nearby forest. Emily laughed and said there is no such thing as Bigfoot. Joshua knew she was wrong and he was going to find Bigfoot."

The next day Joshua slips away into the forest. When Joshua's parents find him missing, they call a Forest Ranger. "Emily told the Ranger that she believed her brother went to look for Bigfoot. Emily asked the Ranger about Bigfoot. He told her that a lot of people believed they had seen Bigfoot in the nearby forest. They said Bigfoot was very big, hairy and smelled badly."

The search is on for Joshua. As others join, Joshua himself is lost and scared. Suddenly he hears a noise, and there's a terrible stink. "Joshua knew that Bigfoot . . . was sometimes called the Skunk Ape." And then there's a giant foot. Bingo!

Bigfoot gets Joshua safely back to camp under cover of darkness. No one believes his tale the next day, of course, and Joshua wonders if the whole adventure was nothing but a dream. But not so. There are those--footprints.

A section of questions and answers in the back of the book tells youngsters that the story is not true, but it could have been ("if there was a real Joshua and a real Bigfoot") and that no one knows for sure if Bigfoots are real. One can dream, can't one?

Posted by Dan Barnett at 6:42 PM No comments: