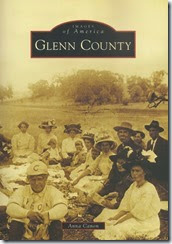 Orland High School agriculture instructor Anna Canon says “a visit to the lone grave of Glenn County pioneer Robert Hambright” opened the door to a deeper exploration of the county’s history. Through the courtesy of Glenn County families who provided photographs and perspective, and through historical records research, Canon found a way to give back to the community with the publication of “Images Of America: Glenn County” ($21.99 in paperback from Arcadia Publishing; also for Amazon Kindle).

Featuring hundreds of black and white photographs with detailed captions, the book is divided into five sections, covering the Sacramento River (“which defines much of the eastern border of Glenn County”), the foothills, the valley, irrigation, and the Glenn County Fair.

The county, not without contention, was carved out of the northern section of Colusa County on March 11, 1891. “The name of the county was proposed and financially supported by the family of Dr. Hugh James Glenn, a prosperous wheat farmer who came with his family to the Jacinto area in 1868.”

Along the way we learn that “Butte City has been known as Laramie, Gouge Eye, and Pin Hook”; “Hamilton Union High School was organized on July 20, 1917”; and “under the direction of Ernest G. Hamilton, the 600-ton capacity sugar plant was completed in 1906,” closing and opening again for 90 years.

Baseball was a hit. “Beginning in the late 1800s, Orland played baseball up and down the Sacramento Valley. In 1912, the team was known as the Bearcats. In 1941, they were the Tigers.” The book also features a picture of a Butte City pig with 6 legs, flooding by Stony Creek, and celebrity judges for the first Miss Glenn County pageant in 1954: Max Factor Jr. (the cosmetics impresario), actress Donna Reed, and actor Charlton Heston.

True stories of the Sierra Nevada 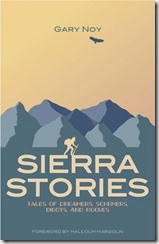 Gary Noy was born in Grass Valley in 1951 and, in later years, taught history at Sierra Community College in Rocklin for decades. He is the founder of the Sierra College Center for Sierra Nevada Studies and published, with Rick Heide, “The Illuminated Landscape: A Sierra Nevada Anthology.”

Now he’s taking up his own pen to bring to light some of the lesser-known events and personalities of the area. “Sierra Stories: Tales Of Dreamers, Schemers, Bigots, and Rogues” ($17 in paperback from Heyday/Sierra College Press; also for Amazon Kindle) also includes more than 60 historic photographs.

The book begins in the author’s home town. “There is a curious little street, basically an overgrown alley, dark, shadowy, and exotic, that leads up the hill toward the Empire Mine grounds in Grass Valley. It is called Kate Hayes Street.” It turns out Catherine “Kate” Hayes was born in Limerick, Ireland in 1818 and in 1849 sang for Queen Victoria in Buckingham Palace.

A few years later she toured the U.S., traveling to California’s gold fields in 1851. “With his unerring sense of how to make a buck, the great showman P.T. Barnum sponsored her tour. She was billed as ‘The Swan of Erin,’” competing in fame with Jenny Lind, “the Swedish Nightingale.”

John Bidwell makes a brief appearance or two, but the book focuses more on out-of-the-way stories, like the “1911 Tahoe Tavern Automobile Race” or the story of Scotsman George Anderson, who wanted to climb the slick surface of Half Dome.

He tried to scale the final grade in his bare feet when boots were too slippery, and eventually packed sacking around his feet, covering it with pitch from nearby trees, and then “the pine-pitch-plastered Anderson began drilling holes in the granite and inserting iron eyebolts through which he looped a climbing rope.” He made it to the top in 1875.

Lyon Books in Chico will be hosting a signing and slide show with Gary Noy this Thursday, July 17 at 7:00 p.m.

Posted by Dan Barnett at 8:30 PM No comments: 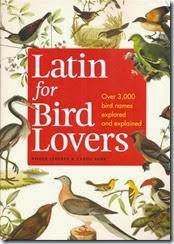 The story is told of a writer, also an avid bird-watcher, who used a book called “Birds of the West Indies” to guide him at his Jamaica estate. He was writing a spy novel, needed a name for his protagonist, so he used the name of the bird book author, James Bond. Ian Fleming only met the real Bond toward the end of Fleming’s life, but the two shared ornithological joy.

A writer some years ago identified “true birders”—bird-watchers with a scientific bent—“in which the naming of things is an overriding hunger.” The husband-and-wife team of Roger Lederer and Carol Burr (who produced “The Birds of Bidwell Park,” where Burr provided the illustrations) have given birders a stunning compendium. “Latin For Bird Lovers” ($24.95 in hardcover from Timber Press) contains “over 3000 bird names explored and explained.”

Birds are listed by their binomial names, which is usually in a form of Latin or Greek; these are “double names” identifying the genus and species in a vast web of “evolutionary relationships.” These scientific names are more accurate since the same bird may have different common names in different areas. The fun comes in figuring out the sources of these (mostly) descriptive scientific names.