“The Final Safari: A Photographic Essay” 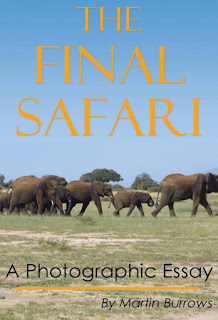 Orland resident Martin Burrows, armed with press credentials and a commission to report for the Sacramento Valley Mirror, landed in Nairobi, Kenya in the summer of 2014. His stories for the paper, along with dozens of full-c0lor images, have been collected in a new book, “The Final Safari: A Photographic Essay” ($14.99 in paperback from CreateSpace, available at Amazon.com).

Burrows is no stranger to Africa. “I arranged in the 1970s,” he writes, “to go to the American University of Cairo in Egypt as an exchange student from California State University at Chico. After graduating, I got a job representing a high-profile Saudi company.” He tried to use his position for financial enrichment, meeting in Mogadishu in 1977 for the purpose of selling arms to Somalis. “The enterprise fell apart in a catastrophic fashion, and I seriously contemplated suicide. Instead, I converted to Catholicism.” It was amazing grace.

Now, Burrows was returning to Africa, to Kenya and Uganda, for cultural enrichment. With the Ebola outbreak, tourism dropped dramatically, “thus enabling me to have access to any hotel and safari vehicle I wanted.” So it was off to Nakuru Lake Park in Kenya in search of lions.

“I hired a private vehicle rather than go with a group so I could stop and get out to get good photos. As this was against park regulations, I asked my driver why this was so. He said, ‘because the lions will eat you.’ I told him, nonsense, I would give him seven dollars if he would let me out. He said, okay. I now knew what my life was worth.”

When no lions turn up on his various safaris, he begins to realize his guides were promising more than they could deliver. Burrows is determined to find the beasts despite all the “lion.” It was a matter of pride.

Uganda is friendly, but there were long bus rides. “If we are young with a cast iron behind, go for it, but at sixty seven and flabby I probably should have known better.”

From pick pockets to charging elephants, Burrows’ straight-talking account and accompanying pictures make for an armchair safari of a love affair with Africa.
Posted by Dan Barnett at 9:00 PM No comments: 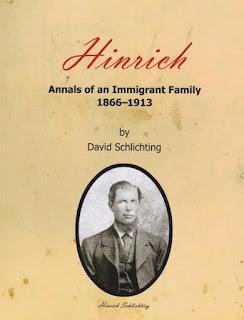 Chicoan Dave Schlichting has published a documentary account of his ancestry that is a model of historical preservation. Aided by family members who provided photographs and documents, and by his own research, Schlichting has crafted the detailed story of the family patriarch in “Hinrich: Annals Of An Immigrant Family 1866-1913” ($18.95 in paperback from Memoir Books).

Hinrich “was raised on a farm near the small village of Neuland in northern Germany,” beginning “his military service with the Royal Hanoverian Guards Regiment in 1858.” He served seven years. (There’s a copy of his discharge papers and a helpful translation from the German; other documents are also translated.)

Work was not plentiful in civilian life, and Hinrich resolved to emigrate to the United States. Schlichting sifts census records and the passenger list for the steamship “America” and concludes that likely Hinrich arrived in New York City in 1866. Though post-Civil War America was still reeling from the bloodshed, what attracted many Germans--the “pulling force”--was “the availability of land. The conceptual rationalization that made land available was known as Manifest Destiny.”

The author situates his forbears’ experience within a larger historical framework. “Like other immigrants, they moved in a pattern that offered both opportunity and comfort. They lived in communities populated by German-speaking immigrants as they followed the development of the American frontier from east to west.”

There is much about land ownership in these pages, and Schlichting has provided scholarly endnotes including GPS locations so readers can enter coordinates into Google Maps.

“Hinrich,” he writes, “was the family leader who achieved a financial base first in Cincinnati and then in the farming frontier of Wabasha County, Minnesota. By June of 1870, he was a landowner in America. … His marriage to Caroline Truebenbach was the beginning of a diverse first American-born generation with dispersed families in the West and the Midwest. The American generation included my grandparents, Henry and Emma Schlichting.” (A tidbit: Henry’s two brothers also married women named Emma.)

Hinrich died in 1904. He “left almost no written documents from his life, but his accomplishments speak for him. … The soul of his character was a quiet self-confidence.”
Posted by Dan Barnett at 9:00 PM No comments: 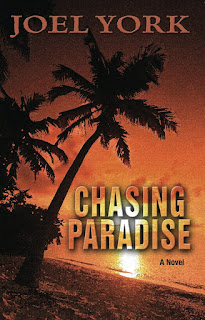 Chicoan Joel York, his biography notes, is a world traveler who worked as “a Fortune 500 manager, a chef, a hotelier, a sailor, a bartender and an event producer” and caught a 200-pound yellowfin tuna.

He became a freelance journalist and now adds novelist to his resumé. “Chasing Paradise” ($14.95 in paperback from CreateSpace; available at joelyork.net/home.html) is the story of a divorced man in his mid-twenties looking for a fresh start. His venue is St. John in the Virgin Islands, where “there were no last names, there were no calendars, there were no watches, there were only wet and dry versions of summer ... the perfect place to redeem my past and create my future.”

Arriving on the island at the end of 2001, the unnamed narrator becomes a sous chef at Café Wahoo “in the World’s Largest Open Air Asylum” and soon makes friends, including Tara, with whom he falls in love; Luke, who characterizes life’s peccadillos as “just puddin’ in a bowl”; and Daniel, who would become his mentor. The story begins with Daniel’s murder and in tracing what comes before, the narrator never escapes the realization that even a Caribbean paradise is no paradise.

There’s lots of drinking (“my liver, once voluptuous and vibrant, shriveled into a caramelized rum ball from a life of perpetual happy hours”) and plenty of funta (“a local blend of tobacco and weed”). Daniel does not partake. “He’d beaten alcoholism and drug addiction. He built his own successful business (no easy task for a white guy in the Caribbean). He’d watched countless friends come and go--even enduring the long and agonizing death of his wife.”

The narrator is kicked by a horse and gets nicknamed Hop-Along (which he hates), but it sticks. Tara betrays him, he becomes estranged from Luke, and Daniel’s beloved Redemption Song, his boat, is smashed by a freak hurricane. He has to learn forgiveness.

“I met so many people while on island, all of them colorful and engaging, but truth be told, the most interesting person I met was me.” The novel pulls the reader in and won’t let go.
Posted by Dan Barnett at 9:00 PM No comments:

"A Twist Of Hate" 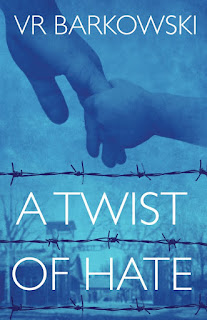 It’s the “hottest ticket in town,” the Post-Impressionist exhibit at San Francisco’s California Museum of Fine Art. And the centerpiece is a work by Paul Cézanne, loaned to the museum by the family of Mendel (Del) Miller. His mother, Hanna (Hani) Rosen Miller, is a patron of the CaMu and a docent there.

But all is not well. In “A Twist Of Hate” ($25.95 in hardcover from Five Star/Gale-Cengage Learning), novelist VR Barkowski offers a noir tale of betrayal, deceit, perversion, family conflict and mystery. The pace never lags and the truth will out.

Barkowski, who now lives outside Boston, writes me that she “was born and raised in Chico, attended Chico High and Chico State (graduate classes). My parents were also Chico natives, and most of my family still resides in town.”

Del, a security consultant and former SFPD homicide detective, is puzzled when he receives an urgent call from Hani to join her at CaMu. As he stands with her in front of the Cézanne, he learns her terrible discovery. “What you see is a forgery,” she says. “That Cézanne is your legacy, your father’s legacy. The painting was with him when he was smuggled out of France during the war. Your grandfather sacrificed his life....”

Hani is clear: “The painting that left your father’s study was the Cézanne. The work was authenticated. I watched the canvas crated for delivery to the museum. This is not the same painting.”

When the museum director winds up dead in his office after a risky act of sexual self-gratification, Del and his best friend Mike Gabretti (whose firm represents CaMu and who was once married to Del’s girlfriend) enmesh themselves in an investigation paralleling the FBI, especially after a local news station reveals a “confession” by the museum director. If the FBI thinks the director committed suicide, Del and Mike aren’t so sure.

The two friends are also rivals, especially where women are involved, and Barkowski skillfully weaves together their tangled history with what they uncover about Del’s heritage. It’s gritty stuff, with raw emotion (and language) and, in context, a picture perfect ending.