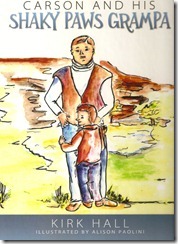 Alison Paolini is what she calls a "Parkinsonian." Diagnosed with Parkinson's Disease in 1999, she has remained a "creatively active" artist and poet, teaching for many years at the Paradise Art Center and lending her illustrator's talent to a new children's book.

"Carson And His Shaky Paws Grampa" ($15.95 in hardcover from Innovo Publishing; also available in digital formats for the Amazon Kindle and Barnes and Noble Nook) is by Kirk Hall, a fellow Parkinsonian in Colorado. Diagnosed with a movement disorder called Essential Tremor in 1991, and Parkinson's in 2008, Hall wanted a way to talk to younger family members about what was happening.

The simple story is told by Hall's seven-year-old grandson, Carson. "When I was really little," he says, "Granma and Grampa Hall lived in a log cabin with lots of trees and a big fireplace." Later his grandparents move closer to the family, and Carson notices the tremor in Grampa's hands. "I asked him what was wrong. He told us not to worry and that he just had 'shaky paws.' 'Besides,' he said, 'I can stir my coffee without even trying!'"

As the condition worsens, Grampa tells Carson that "he was very excited because his doctor was going to help with his shaky paws. He said he would be going to the hospital three times for a special procedure that would take away his shakiness." The procedure works for Grampa Hall, and he is able to have more fun with Carson. The story ends at Easter dinner, with Grampa "giving thanks for his special procedure. He got choked up and couldn't finish. It seemed like he needed a hug," Carson adds, "so I gave him one."

A "note to parents and grandparents" at the end of the book provides a wealth of resources, including information on "deep brain stimulation" surgery which helped the author. It's "described as a 'pacemaker for the brain,'" and though it's not a cure, "it should effectively eliminate my shakiness for years to come. By the time Carson is older, other symptoms may become noticeable. At that time, I will share more with him."

Paolini's colorful sketches will help allay children's fears, giving adults an opportunity to explain something about Parkinson's or Essential Tremor in an age-appropriate fashion. 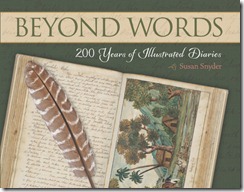 The Bancroft Library at the University of California, Berkeley houses special collections, among them a trove of personal diaries. "In acid-free boxes," writes Bancroft librarian and researcher Susan Snyder, "arranged on shelves in temperature-controlled darkness, they have come as donations, tag-alongs, bequests, purchases, or hotly contested auction lots." They "supply humor, pathos, grime, existential angst, and vision to the entirety of the human record."

Now, from the Bancroft and other sources, Snyder has assembled an extraordinary book. "Beyond Words: 200 Years of Illustrated Diaries" ($45 in hardcover from Heyday Books) gathers excerpts from fifty journals, written by the famous and the unknown, between 1776 and 1981. Snyder, a guest yesterday at Lyon Books in Chico, presents stunning color photographs of key diary pages. She also provides historical context for each diary as well as representative quotations and period illustrations.

Mark Twain is represented here, as is John Muir and Lawrence Ferlinghetti. But so is a man named William E. Voigt. The two pages of his journal (at least it's attributed to him, but no one really knows who wrote it or why) are part of a large, "well-thumbed compendium" "containing the secrets to 575 feats of magic." The entry for Thursday, October 7, 1943, shows how to palm a coin.

From 1917, Snyder writes, "bits of plant fluff, grass stalks, a lock of mountain sheep hair jubilantly found in a crack in the rock face she was climbing, fern fronds, and feathers of all sort illustrate the many field diaries of Florence Merriam Bailey." Adds Snyder: Bailey was "at the forefront of the movement to use binoculars rather than shotguns to observe birds."

In 1878, 14-year-old Caroline Eaton LeConte chronicled her camping trip with her parents and best friend Nona Dibble "in Yosemite Valley and the Calaveras Grove of giant sequoias." Others were along, too, including student Charlie Butters and one Lt. Greenough. One entry: "'Come now,' said Mr. Butters with beaming eyes, ladling out the milk as fast as he could, 'don't let's let all this fine milk go to waste.' 'Don't be afraid,' returned the Lieutenant with a sort of choking gurgle in this throat, 'it'll all go to waist anyhow.'"

We are thankful for the writers who dared turn over a new leaf.

How a Chico high schooler saves the universe 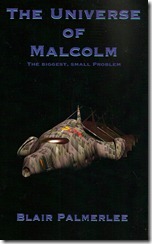 "In the year 2098," novelist Blair Palmerlee writes, "everything and everyone in the city of Chico seemed to be a well-adjusted part of the well-oiled machine, which began life each day. This, however, was not the case for a young boy named Malcolm Thomas. For Malcolm the day would begin the same way it would end: Not soon enough." This particular day Malcolm is not quite late to his favorite high school class, quantum mechanics, taught by Professor Manuel Clarick. Good thing, too. This day Clarick shows off his experiment, and Malcolm has to save the universe.

In "The Universe of Malcolm: The Biggest, Small Problem" ($12 in paperback from CreateSpace) Palmerlee has crafted a wildly inventive sci-fi tale for 'tweens and young adults about a nerdy kid who discovers the meaning of courage. Palmerlee, a recent guest at Lyon Books in Chico, grew up on a farm near Bangor, attended Chico High School (the name of Malcolm's school is never mentioned), and is now studying psychology. His plot keeps pages turning as space battles alternate with deadpan humor.

That fateful morning Malcolm had zapped his hand with his Neutron Razor, and now his hand is beginning to disappear. As his science teacher explains, "You see, the razor works by breaking the electron barrier on the atoms in hair, absorbing the remaining neutralized particles, and recycling their energy for smaller tasks like nostril grooming." But something has gone wrong. Buried in Malcolm's disappearing hand are galaxies and nebula but--surprise!--"a huge war-like spaceship, emerging from what looked like a strange green worm hole. 'Houston,' said Prof. Clarick, as he stared at the pictures. 'We have a problem.'"

Clarick's experiment is not something you or I can understand, but it enables Malcolm to descend into the universe of his own hand so he can put things right and, if everything goes according to plan, emerge before he went in. So in he goes.

There is war in space. The Order, headed by a long-eared Dorexian name Kail, is desperately trying to stop the evil Fults, who will stop at nothing to take the ancient power of Moltor and so rule the universe. Malcolm, who is the universe, must stop him.

No wonder he misses Chico. 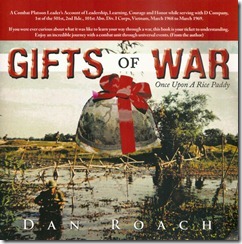 In 1989 Dan Roach was showing scouts from Sacramento and from Willows Troop 57 the Vietnam Memorial in Washington, DC. One of the vets standing vigil at the Wall asked the scouts if any of their fathers who served in Vietnam talked about their experiences. The reply was a resounding "no!" "At that," Roach writes, "my eyes welled up and tears rolled down my cheeks." He determined to give a voice to his own memories.

Roach's memoir is called "Gifts of War: Once Upon A Rice Paddy" ($50.48 in paperback from AuthorHouse, www.authorhouse.com). Included are dozens of color photographs that transport the reader back through the mist of decades. "These stories are all true as I experienced them and written to the best of my recollection." They "aren't any more significant than any other soldier's; they are just mine and I own them." He also chronicles the trip to Vietnam in 2007 made by his son, Shane, to the places he had operated. It is a moving account.

First Lieutenant Roach "reported to Vietnam in March of '68 as a replacement officer" and became a "platoon leader for the 3rd platoon of Delta Company, 1st Battalion of the 501st Infantry, 2nd Brigade, 101st Airborne Division; the original U.S. Airborne unit." Later, before his assignment ended the next year, he became Delta's XO (Executive Officer).

In his assignments Roach witnessed the ugliness of war first hand, the terrible mistakes that can be made in the midst of combat, and the "gift" war provides as a kind of desperate laboratory for leadership development. Roach learned the dangers of complacency; that sometimes "when a serious mistake is made, often times living through it is sufficient punishment"; and to "maintain an honorable vision."

There was another gift as well. A Bay Area radio station in 1968 encouraged listeners to write to the troops, and a Christmas card sent to Roach by one woman changed his life forever. "It was a match made in Vietnam."