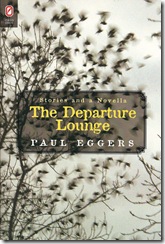 The main characters each experience what Eggers calls "that horrible ignorance about what was really going on." In "This Way, Uncle, Into the Palace," the old narrator, a Vietnamese teacher now living in Fresno, recalls the horrible death of his autistic daughter in Saigon back in 1975. Had Lai been driven to destruction by her father?

Chess unites two of the pieces, "Monsieur le Genius" (about an American chess hustler in Burundi) and "Hey" (the story of a young chess prodigy in Tacoma, Washington whose brother is killed in Vietnam in 1969). In the first, the narrator, who had assumed a phony name, finds his phony life upended; in the second, a chess whiz's mentor reveals a scarred reality. "We live implausibly," the narrator thinks, "but admit to only the plainest of sins."

The reader returns to Burundi in "Won't You Stay, Please?" Neil, twice married and now single, had come to study a local language in the midst of a genocide-tinged country. "Hutu boys high on contact cement murdered busloads of Tutsis, then Tutsi soldiers razed entire Hutu villages. . . ." Neil is a muzungu, a foreigner. In Burundi he would find no "fresh start."

The longest story, "What's Yours, What's Mine," takes Rueben and his wife Maureen ("a woman on the cusp of fifty") back to Bidong, a tiny island in Malaysia where they had been aid workers decades earlier with the Vietnamese boat people. The couple is reuniting with Tony and Stella, who with Rueben had worked with the refugees before Maureen had arrived. There are hints of a different kind of life "pre-her," but Maureen reasons that "when you had a life together, that life could survive small acts of cowardice and sabotage. That life could absorb small betrayals." But what if a betrayal is not so small?

These stories are incisive studies of the inhabitants of the departure lounge, where everyone is carrying plenty of baggage. 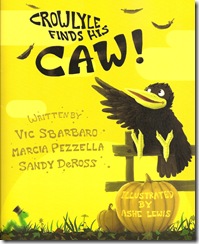 Vic Sbarbaro is a Certified Health Education Specialist who teaches at both Chico State University and Butte College. He and his two sisters, Marcia Pezzella and Sandy DeRoss, have teamed up with illustrator Ashe Lewis to produce an inventive tale in "rhyme and rap" about the effects of bullying and the importance of honesty.

"Crowlyle Finds His Caw" ($10.95 in paperback from North State Children's Books) is available at local bookstores and online at amazon.com and barnesandnoble.com. The story is dedicated to Gary Sbarbaro, a retired doctor of pharmacology now battling serious illness who was nicknamed "Crowbait" when he was growing up in Siskiyou County. So why not a story about a crow family, the Crowsetts?

Puns pile high as the crow flies. The family is preparing for the Crow Idol Cawtest and Crowbait, Crowlyle's twin brother, looks to be the sure winner. But is he getting hoarse with all that practice?

Crowlyle, meantime, doesn't even have a caw and he's also worried about a bully. "That mean old bully Crownin / He steals my lunch each day / I wish I were tough and buff / to keep his crownies away." Then Crowlyle meets Wilbur wiggly worm and together they hatch a plan to scare the bully with a gummy worm ("that will make his old caw CROWk"). Wilbur takes Crowlyle to the Feathered Weathered Spa to see the silent scarecrow "who will help you find your caw" by scaring it out of him. And it happens. "Ah Haw! I found my Caw!"

Then onward to root for Crowbait "in the Crow Idol rap show." But something's wrong. "Crowbait begins to caw his rap / Into the miCROWphone / He then becomes cawless / And feels so all alone." Swiftly, "Crowlyle flies to a hidden branch / And there in staged disguise / Begins to caw Crowbait's rap / Which is a HUGE surprise." Crowlyle belts it out: "So quit teasing others / Don't be cruel / Stand up for a friend / Is the golden rule."

Crowbait gets a standing crowvation. But who really deserves the award? Crowbait, too, has something to learn.

Lewis' full-page illustrations are delightful, colorful and beautifully detailed. And, if I may say so, it's all for a good caws.

The heart's journey of bereavement from a Willows author 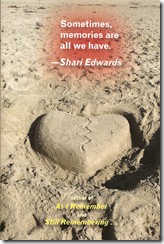 "On December 17, 2002," writes Shari Edwards, "my husband Ted passed way, leaving me behind in a world I had not faced alone in twenty-five years. I went into the desert--into a cave." Her story is told with clarity and deep emotion in "Sometimes, Memories Are All We Have" ($15.95 in paperback from Memoir Books/Heidelberg Graphics). The book is available at Lyon Books in Chico or from the author at shashanee@aol.com.

Edwards is scheduled to appear on Nancy's Bookshelf, hosted by Nancy Wiegman, this Saturday at 4:30 p.m. on Northstate Public Radio, KCHO 91.7 FM in Chico.

The book is divided into sections that chronicle a journey of bereavement. It begins in the desert, fighting "grief monsters" (her father died a year later), living "a bat-like existence" in an emotional cave. "Sometimes there are too many memories, their fingers around my throat. . . . Sometimes there would be a knock on the cave door. I would lie still, not responding. But eventually, friends and family just walked in, uninvited, holding a candle against the dark, looking for me."

Gradually Edwards emerged and started to write again. But the passage to the light led through an emotional swamp that she and her daughter had to travel together.

Though the author was raised a Catholic, Edwards writes that Ted believed in a "metaphysical" world in which "loved ones who had passed over" could be reached. The author visited a medium in Chico and became convinced that Ted was telling her to "move on." "I planted ninety tiny zinnias. . . . By summer's end I will have a ribbon of bright colors."

But then came a "wrong turn," an intense affair with someone she had known since kindergarten. She trusted, fell in love, planned for marriage, then he suddenly dropped it all. Her heart was "stomped on . . . without a conscience." Yet she survived. "With a new understanding that our time on earth is short I rush to right wrongs, to love better. . . . Now, I am more comfortable with my mortality. I do not fear it, but in this autumn of my life I do not celebrate it." She asks God for more time. "I am not finished yet."

Have a minute for some Chico history? 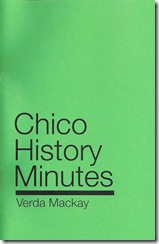 "Chico History Minutes" ($10 in paperback at the Made in Chico store) is Verda Mackay's self-published compilation of scripts from her radio program of the same name. First aired on Northstate Public Radio KCHO, 91.7 FM, in September 2005, the feature generated requests for a print version. The thick booklet contains 114 "minutes"; though most center around the Bidwells, other entries consider places, names and culture in succinct summaries.

Mackay, who is also a Buzz contributor, writes that "as a history enthusiast and a Docent at Bidwell Mansion State Historic Park, I welcomed the opportunity to volunteer for the program. . . . Chico history research has involved many publications, Butte County Library in Chico, personal interviews and other sources. . . ." What emerges are quick takes on the life and influence of John and Annie Bidwell, the original DNA of Chico.

In 1848, she writes, John Bidwell "used choice wine grape cuttings from mission vineyards to start his own 8-acre vineyard. By 1856, he had 15,000 vines and began making his own wine. But Bidwell's enthusiasm for viticulture changed when he met his future bride, Annie Kennedy, who was a staunch prohibitionist. Before their marriage in 1868, he tore out his wine grapes and planted raisin vines, a new crop for California." The result? "In October, 1868, Bidwell marketed his first commercial raisin crop and began an era of California raisin growers."

"Adventures of Robin Hood" came along in 1937, but the first movie made in Chico? Mackay writes that "'Folly of a Life of Crime' was made in 1914. . . . Annie Bidwell gave special permission for use of Bidwell Park locations. From 1937 to 1997 several movies were shot in Chico. In 1939, scenes from 'Gone With the Wind' were made in Bidwell Park, and scenes for 'The Thin Man' took place inside Bidwell Mansion."

Mackay notes that in 1875, Chico's population "of about 1800 people was served by three physicians when Dr. Oscar Stansbury arrived in Chico. . . . Office visits were $5.00 and there was a frequency of home visits. As a country doctor, he was on call 24 hours a day."

For the price of two office visits, "Chico History Minutes" will help keep the past alive.