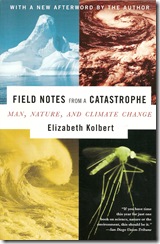 Elizabeth Kolbert filed a series of reports on global warming for the New Yorker which won the National Magazine Award in 2006. Kolbert traveled to Alaska, Greenland, northern England, the Netherlands, and other locations "to convey, as vividly as possible, the reality of global warming." Her book, based on the articles, is clear that the issue is not merely academic. "Field Notes From a Catastrophe: Man, Nature, and Climate Change" ($13.95 in paperback from Bloomsbury) documents changes in the natural world as more and more carbon dioxide is pumped into the atmosphere. She also examines "the complicated relationship between the science and the politics of global warming."

Kolbert will be speaking at Chico State University's Laxson Auditorium Wednesday, March 11 at 7:30 p.m. as part of the On the Creek Lecture series. Tickets are $15 for adults, $13 for seniors, and $10 for students and children, and are available through Chico Performances (www.chicoperformances.com) at (530) 898-6333.

A series of book club meetings to discuss Kolbert's work is being held at the Chico Barnes & Noble store, facilitated by Chico State University anthropologists, geologists, environmental scientists, and others. The final two meetings are on Wednesdays, March 4 and 18, at 7:00 p.m. The public is invited.

Kolbert traces the discovery of the effects of so-called greenhouse gases in the atmosphere and finds evidence of climate changes in the shrinking Greenland ice sheets, shifts in the genetic code of a certain species of mosquito, and the fact that "in the Sierra Nevada of California, the average Edith's Checkerspot butterfly . . . can now be found at an elevation three hundred feet higher than it was a hundred years ago."

Kolbert acknowledges that "many uncertainties exist" in predicting what may come of all of this. It's true that "humans aren't the first species to alter the atmosphere; that distinction belongs to early bacteria, which, some two billion years ago, invented photosynthesis. But we are the first species to be in a position to understand what we are doing." There may be a threshold beyond which greenhouse gases could usher in "a complete new climate regime, one with which modern humans have no prior experience." Her conclusion: We must act globally to reduce greenhouse gases. Now.

When pastors abuse spouses: A compassionate look from a Willows couple 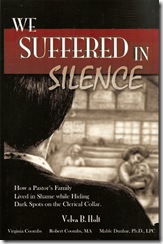 The story is not easy to tell. Velva Holt was a church pianist and music teacher, a writer who published numerous poems and articles through Pacific Press Publishing Association, and a pastor's wife. Her husband, Al, was a singing evangelist. Handsome and talented, he found favor with various church officials and was soon ordained to the pastorate. As the years passed Velva and their daughter, Virginia, had to face the reality that Al was having affairs with at least two women from separate congregations. Eventually, after Velva, heartsick and confused, demanded a divorce, he would marry the one from Red Bluff.

Velva's story took on book form after she finished the manuscript in 1999 at the age of 88 and a series of providential events led to its publication. Virginia, whose first husband was taken by cancer, married Bob Coombs, now a retired social worker and abuse counselor still active in their Willows congregation. The couple added their own perspectives to Velva's manuscript, along with excerpts from the work of Mable C. Dunbar, a counselor for the Upper Columbia Conference of Seventh-day Adventists.

Though Al and Velva are no longer living, there is a legacy of painful memories. Perhaps the title says it all: "We Suffered in Silence: How a Pastor's Family Lived in Shame while Hiding Dark Spots on the Clerical Collar" (about $15.00 in paperback from Xulon Press; for more information visit http://www.preyerplanning.com/book/velva-holt.htm).

Virginia and Bob Coombs will be signing copies of their book at Barnes & Noble in Chico this Saturday from 1:00 - 4:00 p.m.

The pressure to pretend all was well nearly tore Velva apart. Her husband's sexual addiction raged unabated despite all her prayers and his apologies: "All my efforts had been as futile as pouring water on an erupting volcano. But I had tried the impossible."

Virginia Holt Coombs writes about her parents in an extraordinary series of chapters. Her father, she says, had a background of bars and "gigs" before he married Velva, and, immature in his faith, was ordained with no formal education or theological training. This is not to excuse the man but to better understand him.

The book offers many resources for the abused Christian spouse. The silence has been broken.

One woman's view of Chico and beyond 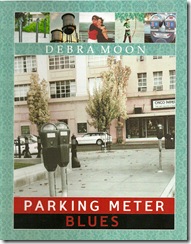 Debra Moon, the author of "Chico: Life and Times of a City of Fortune," is a self-described "freelance photojournalist and educator." In her varied career she worked on the Hopi reservation in Northern Arizona to preserve native language and traditions, got her start in newspaper reporting with the weekly Chico Times almost thirty years ago, and now teaches language arts to high schoolers. The itch to write has never departed.

Moon's new book features more than three dozen vignettes that "were written from notes scribbled on napkins, maps, backs of flyers, or checkbook registers." She calls it "Parking Meter Blues" ($14.95 in paperback from Page 1 Press in Chico), a kind of "travelogue of my life." While some of the pieces have been published elsewhere, most of them are original with the book, and they reveal a writer with a thirst for the poetic and a talent for offbeat humor, especially when it comes to romantic relationships.

The author will be signing copies of "Parking Meter Blues" tonight at 7:00 p.m. at Lyon Books in Chico; the public is invited.

The selections range from "Revisiting Robin Hood" (on the 2005 Bidwell Park centennial celebration which featured a showing of the 1937 Errol Flynn movie filmed in the park) to "Colors For a Hostile Nation" (a satirical proposal for hostile crayons, like "ambush apricot", "punch-out purple," and "bloody-knuckle red").

The Parking Meter Blues, she writes, "is is a melancholy song. It begins with the dirge to the space that was lost to the guy that was quicker, and moves on to the wailing stories of the meter that cheated. It rambles to the day without a dime, and ends with the time that paying the dues did no good."

Then there's "The Language of Love." In the midst of a romantic embrace, it's okay to say numbers. "'One more kiss.' 'Meet me in room 354. . . .' Don't say letters. . . . Do not start an outline process, or refer to anything by letter when feeling romantic. . . . Do say: Sugar. . . . Don't say: The Atkins Diet. The Atkins Diet can never be mentioned when trying to light a romantic spark." 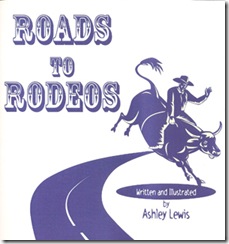 Red Bluff resident Ashley Lewis, now in her mid-twenties, traveled the rodeo circuit with her father since she was born. Raymond Lewis was a Sierra Circuit Champion Bronc Rider and an all-around cowboy. Some of Ashley's experiences are related in "Road To Rodeos" ($24.95 in paperback from www.PublishAmerica.com), which she illustrated with crayon drawings, in a simplified story for kids. As the tale begins, ten-year-old Ashley is loading her dad's calf roping horse into the horse trailer, and then it's off to rodeos in Idaho and Montana. Her dad ropes a calf in 10.2 seconds (no calves are injured). Skill! 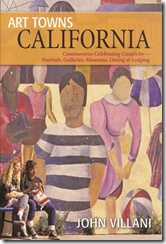 "Art Towns California: Communities Celebrating Creativity--Festivals, Galleries, Museums, Dining & Lodging" ($18.95 in paperback from The Countryman Press) is by John Villani, author of "The 100 Best Art Towns in America." The California book features chapters on 27 venues, including Redding, Nevada City and Chico. The Chico chapter samples the expanse of arts in the city, from farmers' markets to theatre offerings to exhibitions. It spotlights comments from Chico artists Chunhong Chang, who "paints ethereal, soothing images capturing the essential beauty of atmospheres, wildlife, flowers, and fruits," and Richard Satava, "one of California's leading masters of contemporary glass art." 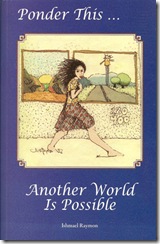 Chicoan Ishmael Raymon "loves birds, gardening, chocolate, and freedom." He calls himself "neither Muslim nor Christian but a seeker of truth who chooses to view this life as a valuable lesson that can be utilized to open a window into another existence after this one, where my true potential and understanding will be more freely manifest." His book of essays, "Ponder This . . . Another World Is Possible" ($20 in paperback from Simply Put Press), is "my attempt . . . to dispel the myth in religion and to encourage simple living " and "a high standard of thought." 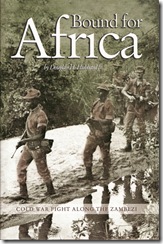 In his first book, "Special Agent, Vietnam: A Naval Intelligence Memoir," Chicoan Douglass H. Hubbard Jr., chronicled his experiences as a special agent with the Naval Investigative Service (now the NCIS) in Vietnam. Hubbard left Vietnam in 1972; he was 27. "I was alive after three years of madness and the angry scarred mountains of Vietnam were nearly behind me."

After a stay in Australia he traveled to Rhodesia in 1974, his "heart set on rural Africa." He found himself a member of the British South Africa Police, "Rhodesia's national police force." His was not a peaceful life. The story is told in "Bound For Africa: Cold War Fight Along the Zambezi" ($34.95 in hardcover from Naval Institute Press). Hubbard will be signing copies and presenting his experiences at Lyon Books in Chico tonight at 7:00 p.m.

Rhodesia was governed by a white minority. In 1965 white settlers declared independence from Britain and resisted efforts to negotiate a transition to a black majority government. As John Cann says in the introduction, "The political vacuum between the white minority's position and the majority black population's desire for a government elected by universal suffrage allowed the emergence of Robert Mugabe, a Marxist intellectual and leader of the Chinese-backed Zimbabwean African National Union."

Hubbard trained counterinsurgents. "Rhodesia was facing an apparently escalating war against terror--one with disturbing similarities to the conflict in Vietnam I had left. . . . " The author's account of his field training operations will be attractive to anyone interested in military history. But the story gets personal in a chapter modestly entitled "Unexpected Events." In field training one evening Hubbard lit the fuse of a charge he wanted to throw as a simulated grenade when, "midstep, there came an enormous crackling explosion that hurled me to the ground. In a millisecond, my life changed forever. The charge had detonated prematurely, taking with it my right hand and wrist."

Hubbard would leave Rhodesia, with "a wife to consider and a very uncertain future," but he never forgot the "ignorant intolerance that I had witnessed fueling African conflict." He mourns over a Zimbabwe that has "lost the last vestiges of democratic government through ethnic cleansing, arbitrary seizures, and state-sanctioned brutality."