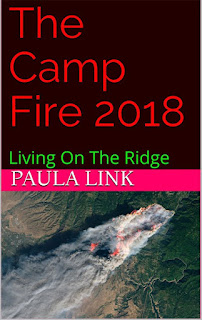 Paula Link writes that she was "born, raised and lived in Rio Linda, CA most of my life. Upon retiring from my job of 26 years and much thought I decided on a change of environment. With mixed emotions I pulled up my roots and moved to Magalia...."

That was in 2013. In some ways it was a difficult adjustment for Link and her husband Frank, but they soon settled into their upper Magalia home. They are surrounded by wildlife, part of the charm of the place, and also provided a home to a gaggle of animals, including big dogs Ziva and Zoe, little dog Daisy, Bella Bunny, house cat Oreo, birds, and seven feral kitties. When they had to evacuate on November 8, 2018, it proved quite a challenge.

She writes about that experience in "The Camp Fire 2018: Living On The Ridge" ($21.95 in paperback, self-published; also for Amazon Kindle). "The smoky sky and air was threatening and to think that if we had taken the Paradise roads out we may not have survived. There were many others with the same idea, as there were a good number of vehicles ahead and behind us on that dirt logging road called Doe Mill Road but when we reached Highway 32 over an hour later the line of vehices coming from the Butte Meadows route with those who took the high road was just as packed and the line of headlights in the rearview mirror seemed endless."

But they survived, and so did their home. The book is less about a traumatizing ordeal (it was that, of course) but about the loss of a community, especially Paradise. Link summarizes some of the harrowing accounts of escape found on YouTube and there are dozens of full-color photographs by Frank and her son Justin Mohorich and daughter Alison Mohorich (Alison Ann Photography).

Link's reflections end on a mixed note. She is thankful for many friends who helped but writes that wildfire devastation "is just too much for someone to be ready for, especially when you have all the animals that we do. ... I hope and pray it never happens again." 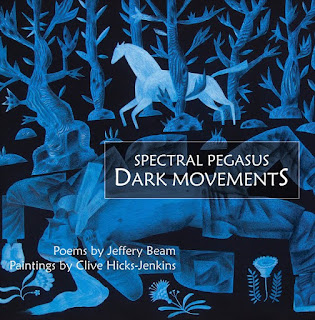 The Welsh tradition of Mari Lwyd (sounds like "mary loyd") hearkens back to ancient Roman and Celtic veneration of horses.

According to Sarah Parvin, a Jungian-trained psychologist who blogs at The Curious One, "the cult of Mari centres round a mare's skull bedecked in sheet and ribbons, which is carried from door to door to mark the passing of the longest nights of midwinter. The Mari is accompanied by a band of mummers, in the guise of the dead, who ... seek admission into the houses of the living. Upon gaining entry, food and drink are enjoyed by all and blessings bestowed for the coming year."

Welsh artist Clive Hicks-Jenkins recalls his father being incredibly scared as a child when the Mari Lwyd came around; a series of paintings Hicks-Jenkins subsequently created serve, Parvin says, as a "personal meditation on the death of his father and an elegy to the friends and colleagues he had lost during his theatre career to the AIDS epidemic."

Now, American poet Jeffery Beam (jefferybeam.com), who lives in Hillsborough, North Carolina with his husband, has collaborated with the artist to produce a book of mesmerizing poems about, as the writer told me in email correspondence, "the transformation of masculine and horse energy into ... something else." Both writer and artist take American dancer Jordan Morley as their muse.

In one sense the Mari Lwyd is Halloween-frightening. "I am Pegasus Spectral/ Pegasus Reversed" the poet writes; "I am your nightmare-longing toward dust/ Be not afraid. // Stop shaking/ Every funeral prophesies resurrection...."

In "Drift," "Mari Mari Lwyd having never spoken your name/ your name becalms me/ Right hand to heart left hand gloved closed holding a secret/ Void's origin waiting to be opened/ for you as you are for me my stalwart."

A secret? Two, actually. In "Pegasus," the words have a particular resonance: "Liberty and Love the two Great Secrets/ Making the Divine Mind smile/ Making Death forget himself and sing/ Paradise regained/ Without contraries is no progression."

"I Escaped The California Camp Fire" 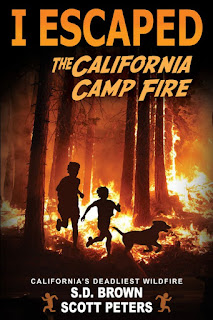 Scott Peters designed hundreds of museum installations but in recent times has turned to writing for Middle Grade readers, teaming with S.D. Brown of Northern California to publish a gripping novel set in the midst of the Camp Fire.

"I Escaped The California Camp Fire" ($7.99 in paperback from Best Day Books For Young Readers; also for Amazon Kindle) is the second in the "I Escaped" series about "brave kids who face real world challenges and find ways to escape."

The story is a fictionalized account of the fire which draws on published reports. The hero is fourteen-year-old Troy Benson who lives with his parents and kid sister Emma in Paradise along with Rascal, their German Shepherd, and Midnight the cat. When his dad and mom leave him in charge to attend a dinner in Redding and stay overnight, Troy dreams of all the junk food he plans to eat.

Frankly, Troy is bored. Real civilization (read "San Francisco") is hours away. "Instead of people, Paradise had trees. Instead of streets, there was one road in and one road out. Instead of high-rise buildings, there were trailer courts tucked between small planned and unplanned neighborhoods."

The next morning, November 8, 2018, everything would change. When he woke at 9:15 "something was off. Suddenly he was wide-awake; his eyes darted left and right. He couldn't see anything. It was black." The power is out, but when Rascal starts barking Troy heads outside. "It was pitch black. There wasn't even starlight. The wind ripped at his clothes like it was being chased by fire-breathing dragons. And smelled that way, too--smoky and warm."

Eventually he knew they had to escape. The neighbor lady refuses to evacuate, so Troy has to drive his dad's SUV Bronco. In piles Emma and Rascal, with Midnight in her backpack. What comes next, the heart of the story, is travel down the Skyway with fire everywhere, running for their lives when the vehicle is caught in the flames, Rascal's key role in directing them to a stream over the hill, and Troy's quick thinking as they head for Chico. 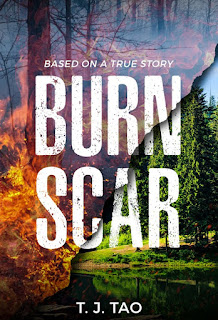 T. J. Tao is the pen name of Michael J. Orr (wordsmithmojo.com). Now based in southern Idaho, he and his family survived the Camp Fire, and though he wanted to publish a factual account, "the truth was that our story had no ending, yet." Conspiracy theories hung in the air.

So he "settled on fiction, weaving the story with more than twenty very real survivor stories (including my own) and some of the conspiracy theory storylines: gold, corruption, government land grabs, etc."

Then he "found a ridge in west-central Idaho that had much the same shape and many of the same features as the ridge that Paradise sits on." The novel's focus is on the town of Genna (Maltese, he says, for "Paradise") with a fire that started in Bear County near Bonneville Road and so was dubbed the Bonn Fire."

The result is a riveting story of a corrupt town manager, a scheme to secure mineral rights along the eastern ridge by any means necessary, murderous henchmen, a dedicated sheriff, and the heroism of first responders and local citizens in the midst of the worst fire in Idaho's history.

Three weeks before the fire, "Mayor Joana Moody was in the midst of an unexpectedly difficult bid for re-election to the Town Council of Genna. ... In most towns and cities, the Town Manager worked for and at the pleasure of the Council. Not in Genna, here Jillian Dupree ran the show. ... She needed Mayor Moody" pretty much as a pawn as Jillian maneuvered the idea of bolting a sewer system onto the eastern cliffside into a fortune for herself.

The novelist is not pleased with Council doings or with "Idaho Electric Power." (Locations and identities of some key players are thinly veiled.) Despite some editing infelicities the story is a page turner in its own right, with a satisfying conclusion.

There's comeuppance that lends an air of finality to something that never really will be finished. 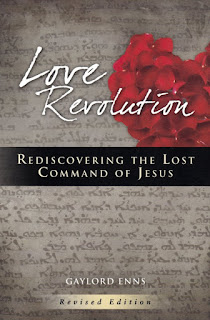 In 2001, with almost three decades in the pastorate, Chicoan Gaylord Enns experienced debilitating burnout. Months later he faced cancer surgery. Granted time away from his congregation to regain his strength, he began studying the Bible and, on May 1, 2002, found the answer to a simple question that profoundly changed his life.

The story is told in "Love Revolution: Rediscovering The Lost Command Of Jesus (Revised Edition)" ($15.99 in paperback from Love Revolution Press, loverevolutionnow.org; also for Amazon Kindle).

In Matthew 28:18-20 Jesus tells his followers to make disciples, "baptizing them ... and teaching them to obey everything I have commanded you." For Enns, baptism referred to faith in Jesus Christ--but what exactly had Jesus commanded?

Enns writes that Jesus taught many things, but only commanded one thing, as in John 15:12: "Love each other as I have loved you." As Enns observes, "I had started ... with a question: What all did Jesus command His disciples to obey? ... It was the New Commandment--His Command."

This contrasts with the Old Covenant commands, the first, to "love the Lord your God with all your heart and with all your soul and with all your strength" and the second, to "love your neighbor as yourself." How can one ever fulfill the first? Doesn't the second interfere with it? As Enns writes, "I struggled with a nagging sense that I wasn't really living up to what God expected of me. My responsibilities as a husband, father, son, friend and pastor kept me from being as devoted to God as I felt I should be."

Jesus' command broke through all this. "Rather than shouting 'I love You, God!' into the sky for hours, I began to realize that maybe I should give just a couple of shouts and then go back into the kitchen and help my wife clean up the pots and pans after dinner. ... In the New Covenant, loving God and loving our neighbor are expressed as we put our faith in Jesus Christ and love one another."

Enns is a winsome writer and a gentle guide. Readers will find much food for thought.