A memoir of God's care 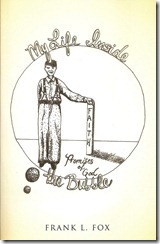 "Today I am living on borrowed time," writes Frank Fox. "If an average person's life span is seventy years, then I have borrowed over a decade and continue to borrow. I have been given this time to contemplate the highs and lows of my life. ... Throughout my life I have been surrounded by God's bubble of protection. The Holy Spirit has always been with me ... even though I have felt unsure or depressed, He has been with me."

Fox' life is played out in a series of vignettes (many of which reflect his sense of humor as well as his Christian faith) in "My Life Inside The Bubble" ($16.99 in paperback from Xulon Press; also available in Amazon Kindle and Barnes and Noble e-book formats). Written with the assistance of Bonnie Tyler, the book contains family photos, a sampling of the author's poetry, and a series of letters written to Fox from various family members. And there are family members aplenty: a "loving wife, four children, twenty nine grand-children, twenty-two great-grandchildren. ..."

A child of the Great Depression, Frank was born Lester Lloyd Potter in 1928. By 1932 the family was living in Oklahoma, the children malnourished. A sister dies, and then his mother. His father is unable to care for the family, and the children are placed in an orphanage. Four-year-old Frank is adopted by Clarence and Olive Fox, farmers from Beaver County, Oklahoma, who give him his new name. ("It was like a self-fulfilling prophecy being 'frank,' which has gotten me into a lot of trouble as well as all the girls thinking I'm a 'fox.'")

Much later came a stint in the Navy and then, in 1949, Frank married Juanita, whom he had met when she was a first grader and he was nine. The union has lasted. "I am proud to say we have only had one family fight. Of course it has lasted for sixty-three years." Frank and Juanita and their growing family moved to California, eventually settling in Orland where Frank went into the antiques business.

"I've had many trials and troubles," he writes. "I have tried to do thing my way many times. Each time, God gently caught me as I fell." At Easter, it's an especially fitting acknowledgment.

The Sacramento River, in all its glory 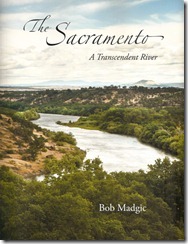 "My love of rivers is deep and enduring," writes Bob Madgic. "What inspired me to move from the San Francisco Bay Area to Shasta county after a career in public education was the Sacramento River. My wife, Diane, and I live in a home overlooking this magnificent waterway. The river's daily gifts are immeasurable. Constant yet ever-changing motion, myriad birds, stunning sunsets that tint the water red, and full moons that coat the surface silver are joined by a continual symphony of river sounds. I can walk to the water any time and possibly hook a spirited rainbow trout. We are truly blessed."

Madgic, aided by project contributor Walt Simmons, has created a printed homage to this great waterway. "The Sacramento: A Transcendent River" ($24.95 in paperback from River Bend Books, 6412 Clear View Drive, Anderson, CA 96007) is a beautifully designed book, replete with color photos, some taken by Madgic, that captures "the power and beauty of the natural Sacramento River, including the flora and fauna that co-exist with it."

Madgic will be signing copies of his book and presenting a multi-media presentation this Thursday, March 28, from 5:30-7:30 p.m. at the meeting of the Sacramento River Preservation Trust, 631 Flume St. in Chico. Books will be available for purchase; the signing is free and open to the public.

The story of the Sacramento River is told in eleven chapters, from the history of the native peoples to the development of Shasta Dam, the "decline of the Delta," the diminishing of the winter-run salmon, and, more recently, new hope for conservation. Ironically, the "age of abundance" created by new technologies also caused industrial pollution and "widespread destruction of natural habitat." But then came new conservation organizations, like the Sacramento River Preservation Trust. Co-founded in Chico in the 1980s by John Merz, it fought a proposal to, in Merz' words, "rip rap every bend between Red Bluff and Colusa," thus turning the Sacramento into a glorified canal.

But even more central to Madgic's story is the encounter with the river itself and how a "natural" river, to the extent that that is possible, offers abundant gifts. The river is a classroom, and the lesson is clear: that "a healthy human race calls for thriving river ecosystems."

From Chico to the Yukon--and the spirit world 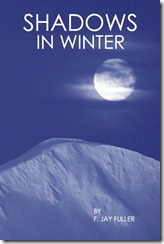 Fuller tells a compelling coming of age story of a young Chico boy, Ahto Twickanen, and his mysterious great uncle, Jaakko, in "Shadows In Winter" ($17.99 in paperback from Cool Waters Press; also available in Amazon Kindle e-book format). The journey begins with the annual Christmas trip to the Quincy area to visit Uncle Aigen. Ahto is ten, and his parents look forward to the big family gathering. Ahto looks forward to seeing Jaakko, seemingly a recluse holed up in a small cabin in the frozen Yukon, save for his sudden and strange Christmas Eve appearances.

Though Lutheran, the family emigrated to America in the 19th century because they "disagreed strongly with church dogma regarding the treatment of those who clung to their native beliefs and practiced the old traditions. ... These were the Sámi, the pastoral people of the reindeer whom the outside world called 'Lapps'--one of the oldest and perhaps the least understood native people in all Europe."

Jaakko is deeply connected to the old practices and, as years pass, it become clear that Ahto (Jaakko calls him "Otso," "the name of a pet bear in the Kalevala, Finland's national epic") is also able to channel powers beyond the ordinary. When the teenage Ahto has a waking vision of Jaakko sick in his cabin, he and his father make the harrowing trip to the Yukon, to Jaakko. While his father and a guide travel back for help, Ahto stays to tend to his uncle. And Jaakko introduces him to the ways of the shaman, the noaide, which opens the door to the Land of Shadows, the spirit world.

Full of adventure and discovery, this well-written story carries on an ancient tradition--and brings it to Chico.

A dystopian novel of Northern California 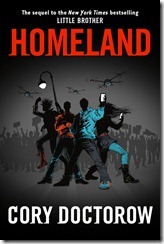 By "Northern California" London-based novelist Cory Doctorow actually means "San Francisco" (with a glace toward Sacramento). I caught up with him by email during a promotional book tour in the US and asked whether he had ever been to Chico. He thought for a long time, he writes, and though he hasn't journeyed through Butte County, he likely has flown over it. What little surveillance he has given us is nothing compared to the digital dystopia he imagines in "Homeland" ($17.99 in hardcover from Tor Teen; also available in Amazon Kindle and Barnes and Noble e-book formats).

Doctorow (craphound.com) is a prolific science-fiction novelist, co-editor of the Boing Boing blog, and a writer and speaker on digital freedom issues. He is a foe of "digital rights management" (DRM) software that, for example, prevents lawfully obtained e-books from being given to others. (The electronic versions of "Homeland" are DRM-free at the publisher's request.)

"Homeland," which takes place in the Bay Area and at Burning Man in Nevada, presents readers with a not-so-distant future in which electronic surveillance (especially of mobile devices) has become the norm by local governments and civilian organizations with contractual ties to the government (think Blackwater, only in the novel it's called Zyz). "Homeland" begins a few years after "Little Brother" and traces the further adventures of now 19-year-old Marcus Yallow who had been brutalized by officials in San Francisco after a terrorist attack.

Now, Marcus has received 800,000 files (think "WikiLeaks") that detail technology's misuse in the name of "keeping us safe." There are the school officials who can view what goes on at home without student laptops' camera lights coming on; the Hearts and Minds "persona management" software Zyz uses that creates "astroturf" (not true grass roots) movements designed to sway public opinion with "paid operatives"; and lobbying efforts to make student loans even more difficult to pay off.

Marcus and his "hactivist" friends are targeted by Zyz as trouble. Doctorow details the geeky use of the "darknet," a place online that the files can be kept without links to who put them there, and amid police roundups, Zyz rough-ups, political run-ups, and relationship break-ups, Marcus finds a voice for a utopian vision of justice and freedom in this fast-paced and unnerving story.

Painful memories from a Chico visitor 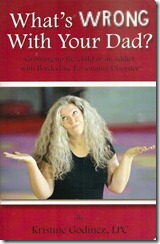 The last conversation Kristine Godinez had with her dad was by phone in 1997. "Three days later," she writes, "he died of a massive heart attack while sitting on the toilet." Though they expressed mutual love, their relationship was "complicated." Now a therapist in Arizona, Godinez grew up in Gridley, attended a "fundamentalist" church in Richvale, and eventually came to Chico State University. She was a recent guest for a book signing at The Bookstore in downtown Chico.

Godinez' father was a local attorney, an accomplished man with a penchant for stirring the pot wherever he went. "My dad's behavior was bizarre," she remembers. "The man prided himself on being a faithful marine and a good Christian, but he would get involved in emotional affairs, left, right, and center. Not sexual affairs, emotional affairs. He would find a woman and idealize her and seek to spend as much time with her as possible."

That was not the half of it. Godinez tells her sad and challenging story in "What's Wrong With Your Dad?: Growing Up The Child Of An Addict With Borderline Personality Disorder" ($14.95 in paperback, self-published; available in Amazon Kindle e-book format). The book is the kind of journal Godinez recommends her clients keep. "Normally I would burn this, but this is to show how it is done. Writing it, I experienced every emotion, every tear, every laugh. I made it from the beginning to the other side intact and so will you."

What is Borderline Personality Disorder? Those "with BPD tend to have very low self-esteem to no self-esteem and are terrified of abandonment. They engage in reckless behavior and persist in suicidal ideation or gestures. They also express the belief that they are unique somehow in their suffering; they have an inability to accept personal responsibility for their actions. ... They are master manipulators." The book details a litany of physical, emotional and sexual abuse perpetrated by the man on his family.

There's plenty of swearing in the book, something the author says helps relieve the hurt, and "aside from the fact it makes people I don't like immensely uncomfortable, I enjoy doing it." There are touches of humor (Godinez calls her mother "Cleopatra Queen of Denial") but the wounds are still there.