"Navy Daze: Coming Of Age In The 1960s Aboard A Navy Destroyer" 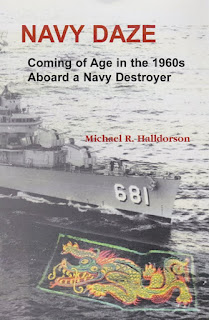 "I would not trade my Navy experience for anything," writes Michael Halldorson (now a board member of Chico's Janet Turner Print Museum). His memoir tells "the story of a young man from a small northern California town who, with no clear direction in life, joined the Navy and came of age aboard a destroyer during the Vietnam War."

The tale of Halldorson's two tours of duty aboard the USS Hopewell (which began in 1964) is written with honesty and self-deprecating good humor. "Navy Daze: Coming Of Age In The 1960s Aboard A Navy Destroyer" ($20.50 in paperback from Heritage Books, HeritageBooks.com) follows a "tin can sailor" with a little too much liberty, somewhat obsessed with "girls, cars, alcohol."

There are "vivid memories of having my nose broken in Japan and a tooth sheared off in the Philippines; both incidents took place in drinking establishments ashore." There are better memories, but also the daily routine, "hours-on-end spent inside a hot and humid five-inch gun mount while patrolling off the coast of South Vietnam."

The big guns would fire offshore to protect troops inland, but, at least during the first tour, "we did not know the effectiveness of our fire. … Our reality was the smell of gunpowder, the noise and violent shaking of the gunmount, and the acrid air inside the mount."

On leave, "one of the highlights of my visit to Chico was going out for a beer in my dress blues with a friend at a new restaurant, the Italian Cottage. The owners … furnished me a gratis pitcher of beer. I have never forgotten that act of kindness they bestowed upon me, especially with the way that the general public treated us."

And the ship's fate? "I found out my former destroyer was resting on the seafloor off San Clemente Island in southern California, sent to the bottom while serving as an unmanned target ship during a test of a new type missile."

Photographs, diagrams, and explanations of nautical terms help readers enter the life of a young sailor-artist on a journey of self-discovery (with stops at a few bars along the way). 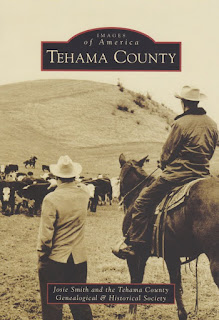 "The first branded cattle in Tehama County belonged to William B. Ide," writes Josie Smith, "who drove 165 head of cattle to California in 1845." A year later Ide became the "civil leader of the Bear Flag Revolt" which declared California to be an independent republic. "The Bear Flag Republic lasted 25 days. It was brought to an end when US Navy lieutenant Joseph Warren Revere (Paul Revere's grandson) arrived in Sonoma and raised the Stars and Stripes on July 9, 1846."

The William B. Ide Adobe State Historic Park honors Ide, though the original adobe, built in 1852, was not his actual home ("he lived farther downriver").

While Ide was a historic figure, Smith focuses on capturing everyday life in "Tehama County" ($21.99 in paperback from Arcadia Publishing, arcadiapublishing.com; also for Amazon Kindle) by Josie Smith and the Tehama County Genealogical and Historical Society. (Though a Chico resident, Smith notes in her acknowledgments that the society "adopted a Butte County person as a board member.")

The book is part of the "Images of America" series featuring large black-and-white photographs with detailed captions. Tehama County came into existence in 1856, carved "from territory belonging to Shasta, Butte, and Colusa Counties." No one knows for sure where the name came from, though there are stories. What is certain is that the book captures the vibrant rural life in the county, from Red Bluff to Paskenta, from Corning to Jellys Ferry.

The book is divided into chapters devoted to the four corners of Tehama County interspersed with sections on transportation, agriculture, and recreation. There's a dramatic picture of the "1915 blast of Lassen Peak … from Walnut Street in Red Bluff 37 miles away," and a closer image of the eruption a year earlier.

There's a picture of a Cushman Harvester, drawn by forty mules, working in the southwestern part of the county around 1902. Elsewhere a caption notes that "by 1890, there were 700,000 gallons of brandy stored in the Internal Revenue brick bonded warehouse at (Leland) Stanford's Vina Ranch. Federal law required brandy to be aged under lock and key and then taxed when removed."

Harvested and aged, the pictures and text are a delight. 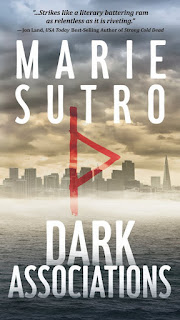 Chico writer Marie Sutro evokes the gritty reality of police investigations in a stunning debut novel of violence, eroticism, and suspense that holds the reader in its grip until the very end. In "Dark Associations" ($9.99 in paperback from Viper Press; also for Amazon Kindle) a serial killer, a psychopath obsessed with medieval torture methods, horribly mutilates a succession of young women whose bodies each bear the brand of the ancient Norse thorn symbol.

The novel's central figure is Kate Barnes, a Special Victims Unit detective with the San Francisco Police Department, a thirty-something beauty racked by her seeming complicity in the death of her younger sister when they were kids.

She is paired with Detective Tyler Harding from Boston. He had failed to catch that city's "Tower Torturer" who killed seven young women. Harding and Barnes realize the murders have begun again, this time in San Francisco. And the new victims are all somehow connected to Kate.

Stymied, the department captain calls in FBI superstar profiler, Special Agent Ben Fraye, with whom Harding had worked in Boston in the fruitless effort to track down the "unknown subject."

Detective Barnes had not dealt with a psychopathic killer before, so Special Agent Fraye explains to her that the UNSUB "sees something in you--something he feels he can relate to." Such killers "cannot relate to others in terms of compassion and empathy" but, "oddly enough, while you can't figure them out, at least one of them seems to understand aspects of you--and you're the one accusing them of being emotionally handicapped."

Complicating matters is the growing attraction between Barnes and Fraye, Harding's own past with Kate, and a killer taking lives just because he wants to. The characters are deeply drawn and the complex plot provides surprises at every turn. The grisly details are there, but so also is a pulse-pounding story that keeps the pages turning.

Marie Sutro (mariesutro.com) will be signing copies of her book at Barnes and Noble in Chico this Saturday from 2:00-4:00 p.m. The author has also scheduled an interview with Nancy Wiegman, who hosts Nancy's Bookshelf on mynspr.org; readers can subscribe to the podcast version on iTunes at apple.co/2igUfQz.

"Lulu Meets The King Of Poo" 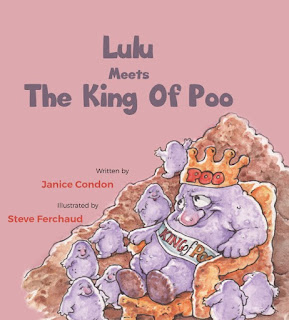 Chico resident Janice Condon (janicecondon.com), a retired occupational therapist, writes in an author's note in her new children's book that "the overuse of antibiotics in childhood" took its toll when she reached middle age. She joined a local group which followed nutrition principles of the Weston A. Price Foundation (westonaprice.org), emphasizing "nutrient-dense foods" (such as raw dairy). Condon found renewed energy once her digestion improved.

Helping children care for their "bio-terrain" is at the heart of "Lulu Meets The King Of Poo" ($14.95 in paperback from Austin Macauley Publishers; also for Amazon Kindle), with colorful illustrations by Paradise's Steve Ferchaud.

One night young Lulu complains of a stomach ache to her mom. It might be the result of a big piece of birthday cake she ate, but maybe anxiety over a science project she had yet to begin. Once asleep, "she had an amazing dream: she climbed into her mouth--and swallowed herself!"

In her stomach she meets a new friend. "I'm Emily Enzyme, and this is my space./ How great that you've landed in just the right place./ Your science project is what you came for./ I'll give you an incredible, digestible tour!"

From the stomach to the small intestine where Lulu meets Abby Acidophilus. "We help your food digest," she says: "We hula in the villi; that's what we do best!" (Speaking of hula, the author's website features a music video called "Do The Acidophilus Hula.")

Then Lulu puts on rubber boots for the journey to meet someone who lives in the large intestine. "Big Benny Bifidus, King of Poo! At your service. How do you do?" Benny tells Lulu that "there are more Bifidi in one quarter inch of your colon, than all the people that ever lived on Earth!" And he adds: "It's our most important duty/ We make things happen in your bootie."

Bottom line (so to speak): That microbe team is pretty gutsy.

"That Ribbon Of Highway I: Highway 99 From The Oregon Border To Sacramento" 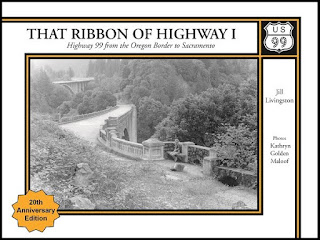 Old US99 was, according to Siskiyou County writer and publisher Jill Livingston, "the expedient way to move people and truckloads of locally grown produce up and down the state through the heartland. The Main Street of California."

The state highway system began construction in 1912; in 1925, thanks to a new Federal numbering system for US Highways, US99, "emblazoned on a white porcelain sign," came into existence. Today, with road and bridge realignments, parts of US99 are now just memories.

Livingston and her photographer sister Kathryn Golden Maloof formed a small press in 1996 to chart the history of the roadway. Now the first volume in the series has been updated and enlarged, and it's a joy to read.

"That Ribbon Of Highway I: Highway 99 From The Oregon Border To Sacramento" ($17.99 in paperback from Living Gold Press, livinggoldpress.com), sized for the glovebox, features a hundred photographs, from the past and present, and maps detailing the route. (Volume II takes the reader from Sacramento to the Mexican border; Volume III tracks Highway 99 through the Pacific Northwest.)

The first part traces the development of the California highway system, and Livingston's conversational style and endless curiosity draw the reader into an extraordinary tale of transformation. The story includes not just how public funding happened (and how much money was saved by painting dashes rather than continuous lines to separate the lanes), as well as the role of private auto clubs, but the development of roadside attractions.

Old motel signs and remnants of service stations recall a time when recreational driving was new. ("The town of Corning on Highway 99 is credited with having the first auto camp in California, opening in 1900 in an olive grove.")

Part 2 is a Northstate tour. Livingston notes that "in 1915 the Esplanade became part of the state highway, later US99. The center was paved with a fifteen foot wide strip of concrete." Part 3, the appendix, is a detailed guide to following the 99 trail.

It's a must-have book; besides, who would want to miss the art deco Shell station in Chico, on First Street in 1935?