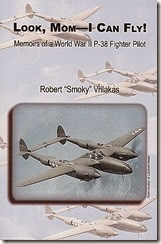 Robert “Smoky” Vrilakas was born in 1918 on his parents’ farm near Red Bluff. His father was a Greek immigrant, his mother a teacher from Wisconsin, and his nickname came from his love of cigars as a high school student from Proberta.

He received his draft notice in the spring of 1941, reporting to the selective service board in Red Bluff “for induction into the army. I sold my beloved Model A Ford for $80” and he was off to basic training at Fort Ord.

It was the beginning of an extraordinary career in the military, where he was awarded the Distinguished Flying Cross, the Legion of Merit, the Air Force Commendation Medal, and more. He tells his story in “Look, Mom--I Can Fly!: Memoirs Of A World War II P-38 Fighter Pilot” ($16.95 in paperback from Amethyst Moon Publishing, ampubbooks.com; also for Amazon Kindle) which includes maps and a wealth of photographs.

Eventually he had the opportunity to train as a pilot. “Flying took me into another world. ... For better or worse, I was hooked.” Then, “about midway through advanced flight training a notice appeared on the bulletin board asking for eighty volunteers to fly P-38s after graduation.” Vrilakas signed up.

He trained at Luke Air Base and graduated in 1943; two others in his class would make a name for themselves, including Chuck Yeager who would become the first human to travel faster than sound, and Dick Catledge, who later “organized and led the first Air Force ‘Thunderbird’ demonstration flight team.”

“The P-38,” Vrilakas writes, “was an awesome sight to us. It was at that time the Air Corps’ top high-performance, high-altitude fighter.” (The “prop wash” once knocked over a portable toilet. The guy inside “made a do-or-die dash for safety.”)

Assigned at first to a base in Tunisia for the 94th “Hat in the Ring” Fighter Squadron, the author flew 50 missions, and details each in the book. As part of the “greatest generation,” he survived. The real heroes, he writes, are those who “made the supreme sacrifice in the very prime of their lives.”

What I was reading when the power went out 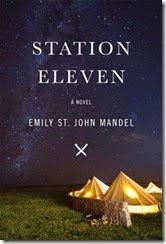 The tragic late-December wind storm knocked out electricity for many of us in the northstate, at least for a while, and the steady reports on our cellphones of the loss of life and destruction of property created a sense of somber amazement. We yearned to “get back to normal,” but for some that will never happen.

What if that would never happen for anyone on earth? What if a deadly virus, far more potent than Ebola, enveloped us, leaving only a handful alive? Those are the questions addressed in an extraordinary book by Emily St. John Mandel called “Station Eleven” ($24.95 in hardcover from Knopf; also for Amazon Kindle). As the power flicked off, I found myself deep in the last few chapters of the book.

The story straddles before and after, weaving together the lives of those somehow connected with one Arthur Leander, who, at 51, is playing Lear at the Elgin Theatre in Toronto when he abruptly dies onstage of a heart attack, leaving behind three ex-wives and a comic book, Station Eleven, drawn by his first wife, Miranda.

She gets the message of Arthur’s demise while in Malaysia. Then come the reports of a deadly virus making its way to North America, spreading everywhere. Almost no one is immune. “This was during the final month,” St. John Mandel writes, “of the era when it was possible to press a series of buttons on a telephone and speak with someone on the far side of the earth.”

Two decades later, “the caravans of the Traveling Symphony moved slowly under a white-hot sky” near Lake Michigan. The small group stops at mostly deserted towns to play classical music and stage Shakespeare. And a little girl once in Arthur’s Lear is now one of that company.

The comic book Arthur had given her will play a key role in a world fraught with violence--but tinged with grace. Too close to home, I’m thinking, with these musings stationed right here, coincidentally of course, on the eleventh [of January, when the review was first published].

Murder mystery from a longtime Chicoan 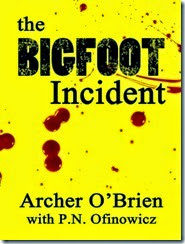 A friend from Eagle, Idaho writes to alert me to a book by P.N. Ofinowicz, who received a Master’s Degree in Creative Writing from Chico State University and who “lived in Chico and worked for the Postal Service for twenty-five plus years. ... Most folk in town would know him as Nick.”

The book is “The Bigfoot Incident” ($9.99 in paperback from Paul N. Ofinowicz/Telemachus Press; also for Amazon Kindle) by Archer O’Brien with P.N. Ofinowicz. The book is billed as a memoir from now-retired Brenner County deputy O’Brien (with editorial work by Ofinowicz).

As O’Brien admits in the foreword, “There is no Brenner County in California, of course, but I will hint that the shape of the actual county is quite similar to that of Montana. And for those who might complain that this recollection resembles a novel rather than a police report, I can only protest that my personal life was inextricably entwined with the strands of the story. What is written here is as true as anything that has been written about Bigfoot.”

Most of the action takes place in and around Cove, “a small town in these remote Citadel Mountains of Northern California.” The “novel,” my friend writes, “recalls an event in which a honeymooning couple are killed and huge human-like footprints are discovered at the scene.”

The grisly deaths attract nosy reporters, and O’Brien also has his own issues to deal with, not least of which is an estranged girlfriend: “When I wanted to protect, it was interpreted as trying to control the people I care about. What was it Leigh said? That love meant ownership to me?”

It’s up to Deputy O’Brien to figure out just what (or who) killed the honeymooners, and to explain the series of gruesome deaths that came after. Mix in the ups and downs (mostly downs) of O’Brien’s love life with small town shenanigans from a well-drawn supporting cast, and what we have is a noir-ish soap opera murder mystery. It is a beautifully crafted and riveting read, with a dramatic moment of clarity at the end.