"Prewriting Your Screenplay: A Step-By-Step Guide To Generating Stories" 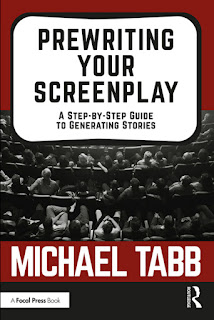 Michael Tabb knows screenplays inside and out. He's worked on projects for Universal Studios, Disney Feature Animation, and many more, and has developed a mentoring program for new scriptwriters.

He'll be speaking at Butte College this weekend, focusing on his immensely helpful guidebook: "Prewriting Your Screenplay: A Step-By-Step Guide To Generating Stories" ($39.95 in paperback from Routledge; also for Amazon Kindle).

The book begins provocatively. "I've never had writer's block," he says. "I never have to wonder what I'm going to write or how to cinematically show it. Why? I have a method. It starts before characters, structures, outlines, and beat sheets." The foundation is what Tabb calls "the premise."

Instead of looking around for a story idea, start from what's in your heart. "I start every script with a premise, the core of a strong idea in all visual media. The idea should be presented as a single statement, no more than that. It must be an incredibly clear and succinct point of view that the writer intends to explore. Story and characters come later." Tabb defines premise as a "hypothesis. It's the story's purpose for existing at all."

The premise is the answer to the question, "If you could convey just one truth to the entire world from your deathbed, and all the world will hear it with your final breath, what would you say?" Some of his suggestions: "Secrets are essential to a happy marriage"; "Absolute power has no true friends"; "Guilt is the roadblock to happiness."

Tabb offers hundreds of examples as he explores the premise, then character creation (from protagonists to love interests to mentors to allies), and finally how a concept is turned into a living story.

Can't wait for the movie!

He'll be presenting "Going From Zero To Story" and "Going From Story To Structure." Tickets are $30 for students and educators, $60 for the general public, free for the first 50 attendees affected by the Camp Fire; visit buttewordspring.org.

"Is There Purpose In Biology?: The Cost Of Existence And The God Of Love" 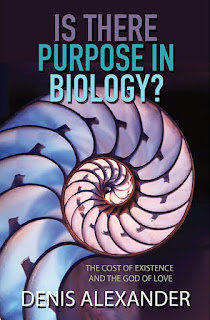 With the approach of every Good Friday, Christians around the world contemplate the suffering that Jesus endured on the cross. His resurrection on Easter morning is a promise that one day our world's torment will be banished forever.

Yet, for many, the presence in our world of so much suffering, over geologic ages, seems more a product of chance than any larger theological purpose. For some prominent voices, it's what Denis Alexander calls "a denial of any ultimate reason for the existence of a biological process such as evolution."

Alexander, an evolutionary biologist and cancer researcher, Emeritus Director of the Faraday Institute for Science and Religion in Cambridge, and a Christian, maintains in a recent book that mere chance doesn't rule in biology. He argues that while a theological conclusion can't be drawn from studying biological processes, they are surprisingly compatible with the Christian story.

"Is There Purpose In Biology?: The Cost Of Existence And The God Of Love" ($16.99 in paperback from Monarch Books; also for Amazon Kindle) is currently being discussed by the Chico Triad on Philosophy, Theology, and Science. The group brings academics, students, and independent scholars together each month to wrestle with big ideas, such as Alexander's claim that "evolutionary theory is consistent with a creator God who has intentions and purposes for the world."

Early chapters in the book focus on the meaning of "random mutations" as part of the engine of evolutionary biology, showing that in the world of DNA it's not a matter of "anything goes," not "random in any strict mathematical sense of the word."

But what might be God's purposes for evolution? Through a theological lens, Alexander suggests the development of biological diversity, which is intrinsically valuable; that "creatures like ourselves should emerge" who can engage in loving relationship with God; and that "the end of our own planet does not entail the end of life as we presently know it."

Carrying out these purposes is necessarily a costly process in a world governed by physical laws. There is much suffering. But, Alexander might say, Good Friday is not the end of the story. 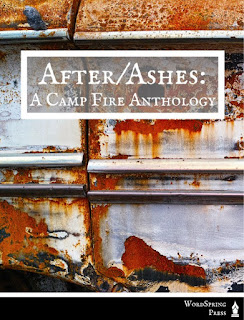 As the editors write in a new anthology of prose, poetry, and images--a creative response to the Camp Fire--it took seventeen days to completely contain it. During that time a group of Butte College students and instructors, themselves deeply affected by the fire, began assembling "stories and visual art featuring both immediacy and recollection; stories that signal not just the end, but a new beginning."

The result is "After/Ashes: A Camp Fire Anthology," a paperback with full-color photographs produced by WordSpring Press. It's available at the Butte College bookstore on main campus and at the Chico Center, and in downtown Chico at Naked Lounge, Kona's, Upper Crust, and The Bookstore. For updates, visit buttewordspring.org/anthology; price may vary with location. (The Butte College WordSpring Creative Writing Conference is Saturday, April 27.)

Edited by John LaPine, with assistance from Claire Grant, Tim Hayes, Grace Armstrong, Lia Deromedi, and WordSpring advisor Molly Emmons, the book begins with "My First Fire," an account of her escape from Magalia by Anne Sheridan. Their house survived, but "devastation still surrounds us. … I see people trying to fix what was broken and reclaim what was theirs. They are coming out stronger in the end."

There is sorrow in the midst, a realization, writes Molly Fisk in "Particulate Matter," of what one is breathing in. "How many miles of electrical wire and PVC pipe swirling into the once-blue sky: how many linoleum acres? Not to mention the valley oaks, the ponderosas, all the wild/ hearts and all the tame, their bark and leaves and hooves and hair and bones…."

A section of photographs by retired English instructor Neal Snidow (the cover is a closeup of "Chevy Side Panel"), and others as well, captures the strange landscape created in California's deadliest conflagration.

And now? Tim Hayes imagines "A Conversation" between the scorched field and the emerging grass. "You stand in the place of a/ late companion,/ how dare you appear so suddenly?"; to which the grass replies: "perhaps I am that same companion,/ I grew from the fragments that/ were left behind./ carnage is necessary for/ creation./ wounds are made for healing./ comfort is the enemy of change." 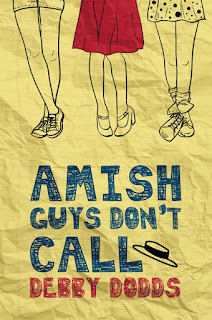 Secrets. "We’ve all got them," writes Portland-based author and actress Debby Dodds. "And sometimes that’s ok, and those secrets are nobody’s business but our own until we are ready to share them. However, sometimes those secrets control our decisions and torture us."

For sixteen-year-old Samantha (Sam) Stonesong, attending high school in Lancaster, Pennsylvania is a chance to move away from her past and the secret of getting nabbed for shoplifting. She's the whip-smart, blunt, yet vulnerable narrator of "Amish Guys Don't Call" ($19.99 in paperback from Blue Moon Publishers; also for Amazon Kindle). The novel is funny, poignant, and wise, sometimes all at once.

More than a teen romance (though much of the action revolves around ogling guys at parties), the book explores deeper issues of emotional loss, cyberbullying, betrayal, the meaning of friendship and faith, and being an "outsider."

The virginal Sam is befriended by Madison who gets her into a female clique called the Sherpas (ruled over by a girl named Hillary--named for Edmund Hillary).

Lancaster is Amish country (Dodds grew up in Lancaster County) and, as Sam notes, "﻿the Amish didn’t go to our schools or talk to us; they stayed in their communities, and we stayed in ours. It was some weird modern-day, mutually-agreed-upon segregation. Except that sometimes Amish teens would sneak out and pretend not to be Amish for a little while. They just weren’t very good at it."

When Sam meets a dreamboat guy named Zach at a party she falls for him big time, especially because they both love horror flicks. But he has a secret, too.

Dodds is scheduled to present two workshops at the eighth-annual WordSpring creative writing conference, Saturday, April 27, from 8:00 a.m. - 3:30 p.m. on the Butte College main campus. "Bringing The Funny To Your Writing" will show "how different writers tickle the funny bone and how attendees can do that in their own writing." "Tips For Terror And Hints For Horror" "examines masters of communicating the dark and teaches techniques of horror writing."