"Melville Among The Philosophers" 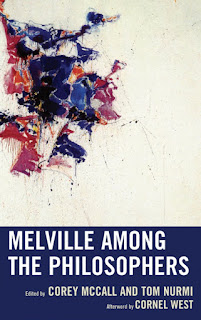 A quarter century after Herman Melville published "Moby-Dick" he published a whale of a poem, some 18,000 lines, called "Clarel: A Poem And A Pilgrimage." It draws its inspiration in part on a trip Melville had made to Palestine which turned out to be wholly uninspiring.

Chico State University philosophy professor Troy Jollimore, a nationally-acclaimed poet himself, takes up "Clarel" as the first essay in "Melville Among The Philosophers" ($100 in hardcover from Lexington Books; also for Amazon Kindle), edited by Corey McCall and Tom Nurmi, with an afterword by Cornel West.

Melville frames philosophic questions in literary form, and the philosophers contributing to the volume view his work through the lenses of feminism, race, beauty, religious studies, and more.

Jollimore's study of Melville's epic is a model of clarity. "The poem," he writes, "describes a journey undertaken by its title character, a young divinity student who is attempting to find grounds for faith, in the company of a group of pilgrims who seem to represent diverse outlooks one might take on various disputed topics."

The primary topic is the possibility of religious faith in the midst of nineteenth-century science, especially the work of Charles Darwin, which seemed to "disenchant" the universe, reducing it to mere mechanism.

For Clarel, coming upon a group of lepers, human nature expressed itself "In voiceless visagelessness" (the title of Jollimore's essay) waiting for a God who is all too silent.

Melville's friend Nathaniel Hawthorne said that Melville "will never rest until he gets hold of a definite belief." Clarel finds the land of Palestine desolate, an expression of Melville's own sense of God's hiddenness. What can one believe, and why?

Jollimore reads the poem through the lens of American pragmatist William James. For Melville belief must not be theoretical, dreamed up in the captain's cabin, but practical, connecting with life out on deck. Jollimore suggests that for Clarel, and Melville, "the notion of evidence ought itself to be understood not abstractly but in terms of lived experience: one discovers what can and ought to be believed not abstractly, but by living a human life."

Can intellect and spirit be reconciled? Clarel, and Melville, find no easy answers. 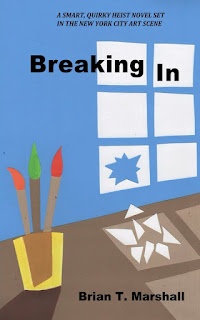 James Ibedson is an aspiring New York City artist whose middling-quality work can't catch a break. The critics ruthlessly hammer his latest gallery showing. The adult son of a wealthy art collector, he's filthy rich and resentful that the Art Establishment can't see beyond his money to the talent he actually has.

He is convinced that if his paintings received the attention they deserved he could hold his own against his contemporaries, artists the critics seem to fawn over simply because they have some dramatic family history. But how to get the needed notoriety? All his efforts to make a splash seem fruitless until, waking up one morning, it hits him. "For the first time in days, in weeks, in years, James Ibedson has a vision. He knows what he's going to do."

What turns out to be a tangled tale is told with aplomb by Ridge-area novelist Brian T. Marshall. "Breaking In" (available in an Amazon Kindle edition from missppelled press in Magalia; missppelled.com) is subtitled "A Smart, Quirky Heist Novel Set In The New York City Art Scene." It makes James' audacious scheme almost seem plausible.

The novel at its heart is about character, what it means to run risks not in theory but in the thick of things, when one's wealth no longer substitutes for the abandonment one feels. James' "mother had died when he was nine. He had no sister, no aunts. Just a couple of older cousins living in Ohio, or Iowa, one of those states with the vowels, who were nothing but a once-a-year photo, names on a Christmas card." As for James' father, Simon, the relationship is decidedly chilly. Marshall masterfully probes the inner workings of James' psyche.

For James' plot to succeed, he needs the help of others. Like Harry Lange, whose work in the art world is not always on the books; a guy named Raymond, no stranger to prison; and Ray's ex-girlfriend Cheryl, or "Shard," whose own talent fundamentally changes James' life.

"Breaking In" is a funny, wise, and poignant portrait of an artist looking for acclaimwho  "discovers his soul instead."

"Through The Red Door" 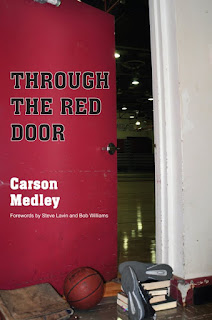 Chico State University's Men's Division II Basketball is helmed by coach Greg Clink. The coach, in his mid-forties, came to Chico in 2008, taking the 8-19 Wildcats in the 2008-2009 season to an 22-8 record in 2014-2015, winning the California Collegiate Athletics Association conference title.

Could the Wildcats repeat in the 2015-2016 season? Writer Carson Medley spent that year with coach Clink and the team, chronicling the games and exploring Clink's life and leadership that shaped an extraordinary basketball program. The Clink ethos is symbolized by a painted door to Acker Gym. "Take as much time as you need," Clink will tell a player, "but when you walk through that Red Door, you better be ready to get after it."

The story reads like a novel. "Through The Red Door" ($22.99 in paperback from CreateSpace; also for Amazon Kindle) tracks the season in masterful prose and page-turning energy.

Clink wants his players to have the right mental set: “We talk about walking the line that borders on being composed and doing something crazy. I like it when our guys teeter on that line. I never want them to cross it and do something stupid, but I want them foaming at the mouth." Yet Clink's focus is not just on winning, but winning right. "Clink’s mission," Medley notes, "is for his young men to transcend basketball."

Defining leadership, "Clink doesn’t have to think more than three seconds. … 'It’s the consistent example of the behavior you want, you expect, you demand your people to follow.' He points out that he must always practice what he preaches."

And the season? "Pace and stillness. A blood moon. Unscripted drama despite the relentless practice and preparation and choreography. Agony and ecstasy and the thrill of victory and the desolation of defeat. Miracles. Fortune. Misfortune. Laughter and tears. Shoves and hugs. Jazz, rap, and country music. Organic. Unedited. Pure spur of the moment-dang-good-old fashioned fun." And three words at the end, from a player's grandmother, that changed everything.

Three other words: Read the book.

"Thoughts To Ponder: From Little Mouse The Mouse" 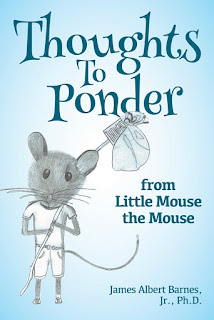 Little Mouse the mouse lives near Paradise Lake, which, not coincidentally, is where longtime educators Jim and Nancy Barnes reside. Jim has been chronicling Little Mouse's adventures in a series of books for kids of all ages (littlemousethemouse.com/index.html) and has made it possible for Little Mouse to post weekly "thoughts."

These wise sayings have now been collected in a full-color book, paired with gorgeous photographs of the Paradise Lake area, including lakeviews in abundance and even fox tracks in the snow. "Thoughts To Ponder: From Little Mouse The Mouse" ($17.99 in paperback from CreateSpace Independent Publishing; also for Amazon Kindle) is written by James Albert Barnes (who took most of the pictures) and compiled by Nancy Marie Barnes.

The dedication provides the purpose of the Little Mouse series: "To bring out the innate goodness within each of us for self, family and society." As the introductory poem ("Listen To The Footprints In The Snow") puts it: "It's a fact that we were gifted the tools we need/ to become whomever/ we were born to be.// That's why it's important/ to seek out The Real You inside/ for that's where the secret really lies.// So next time you walk in the quiet snow,/ let your footprints uncover/ what's inside of you to know."

As Little Mouse says, "You can become whatever you were born to be, if you try T.R.Y." T.R.Y. stands for "The Real You." Little Mouse's thoughts are designed to encourage that "real you" to blossom. There are plenty of challenges. "Unwanted red or yellow zone thoughts may come our way," LM says, "but, thank goodness, we're only responsible for how we behave."

"What are the boulders or roadblocks in your life?" he asks. "Do what I did: Write down what is the problem, what should be, and form a plan and execute it. If you solve it, good. If you don't, try a different plan. Don't give up until you've given it your best effort."

The book is a creative discussion starter from Little Mouse himself. 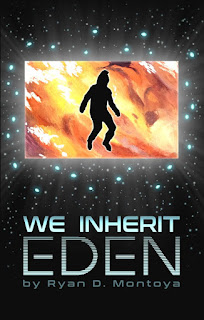 Less than half a century from now interstellar travel is necessary if humanity is to survive. Orion Space Industries has established a colony on Proxima Centauri b, a little more than four light years from earth, and now has employed a pilot, the only human on board, to deliver some kind of cargo to the planet. It will be a long and lonely journey, full of strange dreams and assurances by the ship's Artificial Intelligence that the pilot is not really alone after all.

Mostly narrated by the pilot, unnamed until the very end, "We Inherit Eden" ($9.99 in paperback from CreateSpace) is a science-fictional exploration of the engineering needed to achieve 5% light speed, but also, and more importantly, a singular meditation on what human science has birthed--the A.I. that guides the Orthrus mission.

Written by Paradise High School grad Ryan Montoya, who went on to pursue an engineering degree (and a mountain climbing avocation), this mesmerizing novel hurtles the reader into deep space and the horrific consequences of a life-threatening accident.

But that kind of engineering is easy compared to the challenge of delivering a human alive to his destination. The solution is the stasis chamber with drug-induced sleep. "I knew, when I awoke, that my body would have experienced a solar month and my mind a solar day. But for the ship, an epoch would pass." It takes a long time to go 24 trillion miles, but what is more important than saving humankind?

When catastrophe strikes, it's unclear that the mission can be completed. The ship's A.I. talks to the pilot not only through a voice but as the "pale man" in his dreams. "I don't want to be afraid," the pilot cries out, and the answer is terrifying: "Fear not for humanity, for it is doomed. Fear not for your own life, for its time is numbered."

There is an alternative to fear, the ship says. And it all depends on Eden.