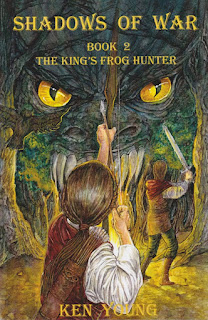 Paradise novelist Ken Young continues his magisterial "frog hunter" epic fantasy with Book 2, "Shadows Of War" ($16.95 in paperback from North Point Publishing). In the Kingdom of Ameram, where fierce frogs are as big as humans, Thalmus, the King's Frog Hunter, must defend Ameram against a new incursion of evil.

The tale begins in the aftermath of Metro's defeat. The sinister magician's evil influence had seemingly been vanquished, old King Ahmbin had been spared, and now his daughter, Ekala Oleen, had become Queen. It was the fulfillment of the ancient prophecy that she would become "the first woman ruler of Ameram."

The prophecy is guarded by Thalmus (one of the Order of Servants who is, mysteriously, "much older than I appear and much younger than I am") and by Larma, a female mystic who listens to the clouds ("Occasionally, the clouds, just like the wind, will speak the truth we need to hear"). That prophecy encompasses the fate of Boschina, the Stone Cutter's Daughter, whose father, Veracitas, expresses the "stone truth" in his carvings.

Ekala and her "Oleens," (mostly) female warriors, ride with Prince Bolimaz, exiled from the northern land of Toulon, to investigate strange doings at the the ford separating Toulon from Ameram. Weapons are being smuggled into Ameram; Metro's evil remains like an invisible fog.

The evil is greater and deeper than any have imagined. Larma listens to the clouds and writes out an urgent message to Thalmus, which Boschina must deliver. Boschina confronts the terrible fighting beast called the Chorgen and she, Thalmus, and Thalmus' trusted animal friends (Dallion, "the striking white and brown Paint stallion"; Bubo, the Great Horned Owl; and Thunder, the giant shell creature, "a mix between a tortoise and a snapping turtle") must battle enemies from without--and within.

Treachery abounds, and two questions haunt the book: Who can be trusted? And what is the truth?

The action never flags, and Ekala and Boschina become wiser through their trials. Though the ending is fitting, it's more of a pause, with the two women now prepared to work out their intertwined destinies in the next book. It can't come soon enough.

"Rainbow: A History of The Rose In California" 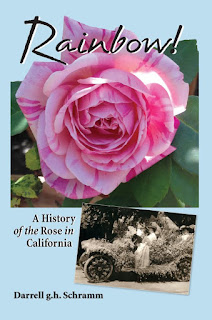 To the delight of budding rose historians, master gardener Darrell g.h. Schramm has written the first account of the flower's arrival and propagation in the Golden State. In "Rainbow: A History of The Rose In California" ($24.99 in paperback from CreateSpace, createspace.com/7229975), the Chico State University grad and retired University of San Francisco professor, now living in Vallejo, writes for the love of the rose.

His book "begins with the first mention of roses by explorers and missionaries and continues through the first 75 years of statehood," up until about 1924.

The first rose in California? It's the controversial "Rose of Castile," a five-petal pink rose brought from Spain to California in the late sixteenth century. Or perhaps the earliest accounts (which are ambiguous) are really about a California native species to which Spaniards affixed a generic description. The "name of the rose" continues in mystery.

Chapters also deal with native species ("California boasts nine wild roses"), cultivars, and "Early Nurseries and Nurserymen," capsule descriptions of petal-pushers extraordinaire including John Bidwell. "We have the 1887 and 1888 Rancho Chico Nursery catalogues. Of the 47 roses listed, 34 are still in commerce today. Apparently Bidwell exercised a good eye for roses." Roses such as Baltimore Belle, Gold of Ophir, and William Jesse are all still available.

Bidwell's grounds keeper, Frederick Peterson, "opened a nursery in Chico in 1907 called Lindo Nursery," which then passed on to his son, George (1903-2001). Though George specialized in Camellias, he "was fond of roses and grew over 165 different kinds. In the 1950s George Peterson proposed a rose garden for the Chico State … campus. When the garden was ready in 1957, George donated 400 rose bushes of many varieties."

The book is replete with photographs of roses and detailed early catalog information in six appendices (including the Rancho Chico list).

"A rose," Schramm writes, "even if it does not repeat its bloom, pervades the senses, the memory. It moves far beyond a show or exhibit, going on and on beyond any season. If we love the rose, it lives on in who we are, becoming a part of us. The rose lives within."

"The Ethics Of Poker" 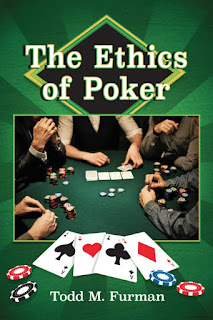 What are the odds that a Chico State University student would graduate with a degree in philosophy and then go on to become a philosophy professor at McNeese State University at Lake Charles, Louisiana? Maybe it was always in the cards for that to happen to Todd Furman, who seems to have a special interest in no-limit Texas Hold'em.

That's evident in Furman's book, "The Ethics Of Poker" ($29.95 in paperback from McFarland; also for Amazon Kindle). It's a witty discussion, packed with thought experiments, of some of the issues of right and wrong raised by the game itself. (It's a reflection on sinning, not winning.)

For poker neophytes, Furman offers an extensive glossary of both poker and philosophical terms (including "Bad Beat Jackpot" and "Veil of Ignorance"), a section on the rules of Texas Hold'em, and a ranking of hands (from Royal Flush to One Pair).

Here and there he loves to talk the talk: "With everyone's attention focused on him, Mike shuffles, cuts the cards, and deals one more hand face down. Turning over his cards, Mike has Pocket-Rockets; the next hand is Cowboys, followed by Siegfried and Roy, and so on. Mike is a mechanic."

But once you know that a "mechanic" is a slight-of-hand artist, it's clear that the other players would not exactly congratulate Mike on his no-holds-barred skill but rather insist that Mike had acted immorally and demand their money back. See? Setting the formal rules of the game aside, poker raises a host of issues, such as whether it's morally acceptable to play with someone who's drunk, or play with a compulsive gambler.

The book is divided into three sections. The first considers the morality of poker itself and how much harm it causes society (maybe a lot, but less than alcohol, tobacco, and firearms, which are also legal). The second deals with actions within the game (such as informed consent--what if the table stakes game turns out to be open stakes?). The third is how casinos ought to operate (so the taxes they pay should reflect actual costs to society, such as "additional crime and bankruptcies").

Will readers learn something? It's a safe bet. 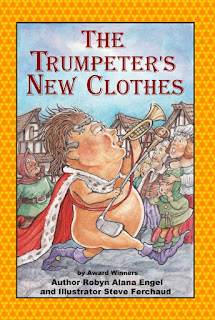 Paradise blogger Robyn Alana Engel's satirical retelling of "The Emperor's New Clothes" comes with a warning: "Not for those who lean Orange."

There's an intriguing personage at the center of her word play. "From Queens arose a King," we're told. "Golden towers housed his bling./ Dim of wit and rich in wealth,/ he told crazed tales about himself/ … A shameless trumpeter was he."

Effervescently illustrated by Paradise's own Steve Ferchaud (with the cover design by Bryan Pedas), "The Trumpeter's New Clothes" ($12.99 in paperback from CreateSpace; also for Amazon Kindle, with more at rawknrobyn.blogspot.com) tells the story of "a huge bellied brute ... colored orange, just like the fruit."

Folks in the kingdom can't stand his soulless trumpeting. "He punished people with brown skin/ and those who didn't worship him./ He broke up families, taxed the poor;/ stole from the ill and old,/ and many more."

As a sign in one of the illustrations shows, he spends much time at his MeLargeEgo Country Club--and there the golfing double entendres begin: "He did work hard, I might say,/ at carving-out large times to play./ One of the King's most favored/ things of all/ was to swing/ long rods at tiny balls."

The plot thickens when, in Putinontheritz Land, "Rushing Brides strategized/ a sly get-rich plan/ to trick and deceive/ the bigly orange man," offering the King a magical "see-through orange jumpsuit" sure to improve his game and attract damsels by the dozen. Of course, there is no actual garment, but that doesn't stop the King. "He debuted his new jumpsuit/ all around town,/ like a naked parade/ of one proud circus clown."

Then, after a tragic school shooting, one courageous teenager points out that the King is not only not wearing any clothes, but he has failed to protect the kingdom. Millions of others join the school kids and the King, downcast, is no longer the center of attention. But not for long.

Engel's goal? To let the chip shots fall where they may.