An indispensable planner for caregivers 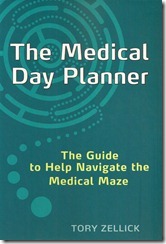 When she was eighteen, local author Tory Zellick became the primary caregiver for her mother, who had been diagnosed with breast cancer. "The next six and a half years," Zellick writes, "were filled with doctor appointments, surgical procedures, tests, scans, and treatments." She was "the official 'form-filler-outer.' We made the best of every day; she continued to be positive and instilled hope in our family. Her strength and the incredible journey we made together as a family unit shaped who my brother, father, and I have become."

Her death in 2009 led Zellick to rethink the care process and she realized what she lacked was a "fill-in-the-blank guide to track Mom's care" to lessen stress on the caregiver. "A caregiver is only as useful to the person they are caring for as they are to themselves." A caregiver's ability to help diminishes without adequate sleep, exercise, proper food--and readily accessible medical information.

Zellick's experience led her to create "The Medical Day Planner: The Guide To Help Navigate The Medical Maze" ($34.95 spiral bound from Victory Belt Publishing). She will be appearing at Lyon Books in Chico tomorrow night at 7:00 p.m. and caregivers, especially, are invited to attend this free event.

The book is divided into tabbed sections including patient information, phone book, medications, appointments, treatment, history, hospitalizations, and notes. The last section is devoted to the 52-week day planner, each day divided into 15-minute segments, that can organize caregiver "shifts," for example, or medical processes ("8:15 drink contrast; 9:15 arrive at hospital for scan"). Zellick introduces each section and offers examples of how it can be used. Her tone is positive but frank. Documentation is essential in discovering patterns or trends in the health of the one being cared for, and vital when new doctors or new hospitals become part of the caring process.

Because it's spiral bound, the planner opens flat so entries are easy to make. Many of its pages contain practical tips, such as the importance of using the "medication pickup chart" to track who is picking up which medication when. She also discusses financial affairs, trusts vs. wills, attorneys, and medical insurance brokers.

The planner and its website (allthingscaregiver.com) are essential companions for those who seek to provide compassionate and effective care.

What's happened to our water? 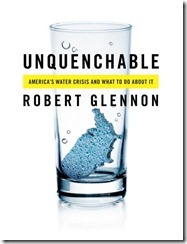 "Water is a valuable, exhaustible resource," writes Robert Glennon, Professor of Law and Public Policy at the University of Arizona. By "exhaustible" he means the right kind of water (the drinkable kind, for example) is increasingly not in the right place at the right time. If in the recent past water was treated "as valueless and inexhaustible," these days few of us are strangers to the latest Sierra snowpack report or headlines about irrigation allotments.

"Water lubricates the American economy just as oil does," Glennon observes. "It is intimately linked to energy because it takes water to make energy, and it take energy to divert, pump, move, and cleanse water. ... A prosperous future depends on a secure and reliable water supply. And we don't have it. To be sure, water still flows from taps, but we're draining our reserves like gamblers at the craps table."

His engaging survey of water rights (and wrongs) was first published in 2009 but, if anything, is even more relevant today. "Unquenchable: America's Water Crisis And What To Do About It" ($19.95 in paperback from Island Press; also in Amazon Kindle and Barnes and Noble Nook e-book formats) is the 2012-2013 Book in Common at Chico State University and Butte College. Many other community organizations take part in book discussions, and the author is scheduled to speak at the university's Laxson Auditorium on Friday, October 5, at 7:30 p.m. (Visit http://goo.gl/R3RXP for ticket information.)

Divided into three parts ("The Crisis," "Real and Surreal Solutions," and "A New Approach"), Glennon's book looks carefully at some of the contemporary "answers" and finds them wanting. "In the past when we needed more water, we engineered our way out of the problem by diverting rivers, building dams, or drilling wells. Today, with few exceptions, those options are not viable solutions."

Glennon's own proposals are not without controversy. "We must raise the price of water" to provide "incentives to conserve." And he advocates a regulated market solution with "quantified and transferable" water rights. "We should require those proposing new development to purchase and retire existing water rights in order to break the relentless cycle of overuse and move toward sustainable water use."

So, as we think about water policy, is our glass half empty--or half full?

A science-fiction thriller from a local writer 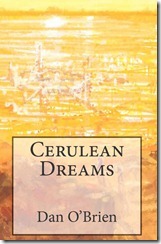 Dan O'Brien is editor of Empirical. Distributed nationally, each issue of the Chico-based magazine delves into the world of human experience with a literary sensibility and willingness to explore new paths. But O'Brien is also a prolific novelist, honing his craft with each exploration of a new world or a human mind.

"Born in Connecticut," he writes in a published interview, "I moved with my family several times over the course of my childhood. Having lived in several states and attended many institutions, I have a unique perspective of the human condition. Each new place, every new relationship, has allowed for me to paint from a rich easel of colors. A lifelong practitioner and enthusiast of martial arts, elements of spiritualism and eastern culture have found a home in my works."

In "Cerulean Dreams" ($14.95 in paperback from CreateSpace; also in Amazon Kindle format), O'Brien imagines a future in which "the world had become an immensely safe place. There was no war. Poverty had been abolished, laws and rituals instituted that would maintain the pleasant temperament of the new-formed society." Every citizen is "implanted in their temple with a motherboard chip." They sleep by day and arise at night. Utopia.

A great many lives had been "lost in the Water Rights Wars of 2076" but, as the news reports, "it marked the inception of the Cerulean Dreams Corporation. And eventually the gathering of the citizens of Earth into the newly-manufactured Orion, the first and last safe haven for humankind."

But utopia is not what it seems in this page-turner. Alexander Marlowe refuses to upgrade his chip software and goes off the grid. He is investigating the seeming murders of young women when he encounters Dana, still alive. Haunted by "shadows," Marlowe and Dana plan to escape Orion, to get outside the city where there is nothing but lifeless desert. Or so they've been told.

The Company, and the mysterious group behind it, want Dana back no matter the cost. What follows are a series of horrific and bloody encounters with the assassin Armon, and the discovery in the desert of a village shaman who points Marlowe to the answers he seeks. Minds must be free, not controlled--but there is a gruesome cost to that freedom.

History of the "Ridge Route" 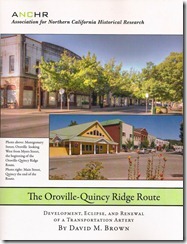 Call it an "alternative" to taking Highway 70. The "Ridge Route" begins in Oroville, moves on to the Bidwell Bar suspension bridge, Berry Creek, Bucks Lake, and on to Quincy. The roadway has had a checkered history, at one time forming a vital link to Oroville as emigrants arrived at Quincy from the eastern US, at other times lying in disrepair.

Independent researcher David M. Brown has drawn on a wealth of documentation to tell the tale of "The Oroville-Quincy Ridge Route: Development, Eclipse, and Renewal of a Transportation Artery" ($20 in paperback from the Association for Northern California Historical Research, www.csuchico.edu/anchr). It includes maps, black-and-white and color photographs, and an extensive bibliography.

Though a work of historical scholarship, the book can be enjoyed by anyone with a hankering to travel what used to be part of the old Beckwourth Trail in the mid-1800s. To that end Brown devotes a chapter to 34 "places of interest," beginning in Quincy "where Main Street, Crescent Street and Court Street come together. This intersection has been the route's beginning since the Quincy &amp; Spanish Ranch Wagon Road was constructed" in 1855. (That part of the Ridge Route was a private toll road.)

Brown writes that "after its first few years of prominence, the Ridge Route experienced a gradual change in use and a fairly steady decline in importance for about 130 years, eclipsed first by usage of competing wagon roads and later by rail and motor vehicle roads through the canyon of the North Fork and East Branch of the Feather River. ... Road improvements beginning in the early 1980s, following an upgrade of Big Creek Road for use by trucks and recreational vehicles, re-opened the Ridge Route to the casual user and made it viable for more commercial usage."

Speaking of commerce, "Charles E. Boles, alias Black Bart, appears to have made two heists on the western side of the route." There were always challenges, especially from the weather. The winter of 1889-90 brought ten-foot snow depths in Quincy and today the road is passable only six or eight months a year. But Brown is "cautiously optimistic" about the route's continued scenic and recreational value. 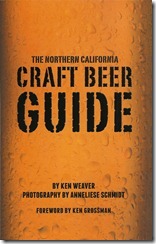 "I think the craft beer world," writes Ken Weaver, "asks a person a very simple question: What do you really want? And I believe that's one of the more important questions we can ask ourselves--whether framed in terms of taste, or how we choose to consume things, or how we interact with the communities around us, or (in the most immediate sense) how willing we are to savor what's directly in front of us. That's what I see in my glass, and having met so many enthusiastic beer lovers of late, I think many of them see it in theirs as well."

Weaver's project, and that of his photographer wife Anneliese (Ali) Schmidt, is "The Northern California Craft Beer Guide" ($21.95 in paperback from Cameron + Company). Full color throughout, beautifully printed, the book is by turns informative, whimsical, funny--and useful. Ken Grossman, owner and founder of Sierra Nevada Brewing Company, provides the foreword.

"When I made my first commercial batch of beer in 1980," Grossman writes, "the industry had hit a low point, and only about forty breweries remained. ... I would literally go door to door to different bars and sell single bottles of Pale Ale. Back then, people thought I was nuts! It was several years and loads of good luck later that we began to see more people moving toward bolder beers."

Today, says Weaver, "Northern California is home to over 150 breweries, approaching one-tenth of the nation's total, and the number of notable beer bars, bottle shops, and other craft beer-centric venues is of similar magnitude."

Weaver has chosen the best, but he's not afraid to say when a facility doesn't quite measure up. Sidebars abound, highlighting almost twenty beer styles (such as Hefeweizen/Wheat Ale), beer communities, sustainability, beer bloggers, festivals, and beer vs. wine. "Wine can be deliciously complex," Weaver writes. "Beer can be deliciously complex." Wine's complexity varies with the harvest; beer depends on the brewer's artistry. It's a heady thought.