"Why Does The Moon Shine So Bright?" 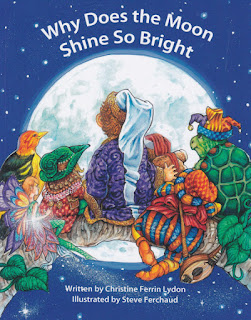 Whimsical curiosity. It seems to be in short supply these days, but Chicoan Christine Ferrin Lydon aims to reignite the spark in her new children's book, which is not only for kids but for adults to read to kids. An author's note says that Lydon, "after raising her children, felt it was time to share the stories she created throughout her years."

"Why Does The Moon Shine So Bright?" ($14.95 in softcover from Artistic Publications; also for Amazon Kindle) is gloriously illustrated by Chicoan Steve Ferchaud. The full-page, full-color images introduce a plethora of fanciful characters, denizens of fairyland, populating a young child's musing on how to answer that perplexing question. (A Spanish language version is also available.)

That old moon is a strange thing: "Sometimes it's big. Sometimes it's small. Sometimes it doesn't come out at all." And more: "Some nights, the moon seems so close, like it has something to say. Its beaming light shines in my room at night and brightens it like day. It's almost as if it's saying to me 'Will you come out and play?'"

So how did the moon get up into the sky in the first place? Could it have flown? Could scientists have "figured a way to hang it way up high"? Maybe there was a great slingshot that put it there?

Once the moon is in place, why does it shine so bright? "Do you think someone stands behind it with a great big light?" Maybe?

There's a lot for a kid to ponder. It's hard work. But then sleepiness intervenes and as the child is drifting off there's the realization that there's so much more to know. Maybe as a grownup all the secrets of the moon will reveal themselves to the child.

But for now, sleep is a welcome companion. But it's not the only companion. In a double-page spread Ferchaud populates the child's room with characters from dreamland. A frog prince. A violin-playing cat. A mouse sitting down for a feast of cheese. Flitting fairies everywhere. A living spoon.

And there, look! Just out the window, barely visible above the bright moon, a magnificent cow.

"After The Virus: A Surviralist's Journal" 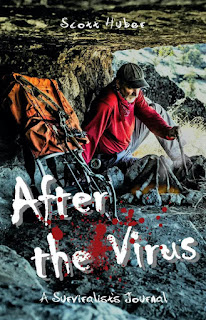 Chico City Council member Scott Huber is now a novelist (with one less item on his bucket list). He imagines a future dystopia where the Ebola virus has mutated so that catching it "was a death sentence ... and a messy one."

Most of earth's human population has been wiped out, but maybe 1% is "VNC," Viral Non-Compromised, immune (but maybe carriers). And so it is with Will, who begins a journal on April 15, 2033, recounting his challenges day to day just trying to remain hidden in the Ishi Wilderness area from militias intent on wiping out the VNC. Will becomes, not a survivalist, but a "surviralist." And thus the title: "After The Virus: A Surviralist's Journal" ($9.99 in paperback, self-published; also for Amazon Kindle).

Huber emails: "I first started formulating the story in 2012, when I made the daily commute from Chico to Forest Ranch for my job at the Big Chico Creek Ecological Reserve. There is a large cave that can be seen from Highway 32 on the east facing slope of Musty Buck Ridge. After visiting that cave and seeing the evidence of the indigenous people who had occupied it, I began to develop the plot."

Will must fend for himself: "Returning to my snares I was delighted to find two good-sized gray squirrels dangling by their necks from the tree. I skinned both and started a small fire, spitted them and had one for late breakfast, salted the other and wrapped it in a bandana to have later for an afternoon snack."

Eventually Will meets other VNC; some prove to be allies, like the young girl named Hope, but others are malicious and worse. The story is grim and violent and gory, aimed at, Huber emails, fans of The Walking Dead, not the Hallmark Channel (cannibals, anyone?).

Later, word comes that the VNC must head to Oakland where a United Nations ship will take them to safety in March 2034. There is a horrendous price as small VNC cells press toward the goal; others continue journaling when Will cannot.

Huber's descriptive skill and edge-of-your-seat pacing lead readers through a nightmare landscape not soon to be forgotten.

"From The Dark Domain: Novel Number One In The Luke Thomas Series" 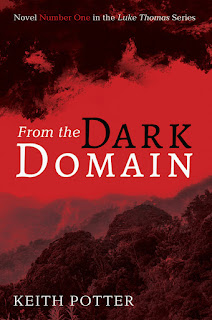 Keith Potter served Paradise Alliance Church as lead pastor during the 1990s. Now living with his wife, Sue, in Eugene, Oregon, he is Vice President for Advancement at Bushnell University (formerly Northwest Christian College) in Eugene.

In Potter's new novel, Arthur Gilliam, comatose in a care facility, is visited by a younger pastor, Luke Thomas, making his rounds.

"From The Dark Domain: Novel Number One In The Luke Thomas Series" ($18 in paperback from Resource Publications; also for Amazon Kindle) is a story within a story. Thomas, "District pastor" in San Diego, finds a manuscript Gilliam has written, a long letter to his estranged son, Donnie, recounting a life broken, yet redeemed by God, which forms the crux of the novel.

Ever attracted to beautiful women, Gilliam falls hard for Alice. Donnie is conceived on their wedding night, but Alice is sexually cold and physically brutal. "As a protector, I failed beyond measure," he writes his son.

She kicks Donnie out at sixteen. Later, after Alice dies, Arthur is alone, preaching but not much believing that stuff about Jesus. He moves to Tahuya, Washington. His neighbor, Lisa, is wondrous to look at, and she is attracted to the wimpy Arthur. Yet Lisa abruptly leaves and Arthur ponders what God is doing.

In the early 1990s he takes a job teaching English in Rwanda at a Christian school. The headmistress, Prudence Nayinzira ("a woman who could have been Miss Universe"), is a Tutsi. One of the older students, Faustin Bizimana, a Hutu, becomes spiritual mentor to Arthur, and together they challenge each other in following Jesus.

"My own becoming," Arthur writes, "presented hand-in-hand with that obscure little country; both of us crowded with regrets and unrealized impulses for the good, and yet capable of harm...." Soon, they all must face the Rwandan genocide as attackers come again and again. If by God's grace Arthur finds courage at last, what form will it take?

And how can Luke Thomas communicate this to those who have loved Arthur?

Potter's novel is masterful--and the searing Rwandan events will leave readers breathless in the face of a God-haunted world.

"Calm: How To Thrive In Challenging Times" and "Calm Parents And Children: A Guidebook" 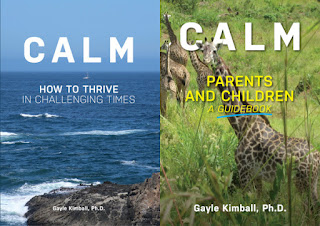 "Calm: How To Thrive In Challenging Times" ($9.99 in paperback) and "Calm Parents And Children: A Guidebook" ($14.99 in paperback, with both available for Amazon Kindle) are published by Equality Press (see gaylekimball.info).

"Calm" lays out the principles Kimball uses while "Calm Parents And Children" draws on her surveys of kids around the world, the questions they have for parents, and applications of the principles to parenting.

For Kimball, the keys to calm involve "cognitive restructuring" ("we can rewrite our brains with our thought patterns") and healing through redirecting the deep energies of the body (she is a graduate of the Chico Psychic Institute, a Reiki 3 master, and is trained in using acupressure for "emotional clearing").

"Hard times," she writes, "can be our best teachers and a catalyst for change.... Of course, it's difficult to find any silver lining in being unemployed or ill," especially in the pandemic. But harmful emotions produced by isolation can drain the very energy needed to move forward. So "be aware of the feeling, focus on it, listen to it. Don't try to stuff it or ignore it. Then let it go into an imaginary container that you blow up, or down from you into the earth to recycle, or you can release feelings through physical exercise."

She notes that "visualizing images serves as a powerful way to harness the power of thoughts. We attract what we focus on; we program ourselves like computer software, so we need to examine our core beliefs, such as about our self-worth."

Her study of Generation Z (those born in the late nineties to around 2010) found "different norms from previous generations" (they tend to be progressive, spiritual but not religious, and accepting of gender fluidity). "Calm Parents And Children" suggests ways parents can respond to this generation in dealing with their strong-willed child, gender stereotyping, teenage addiction to social media, and young people who won't listen to authority.

Discerning readers will find much to ponder.