How "Wings of Eagles" came to be 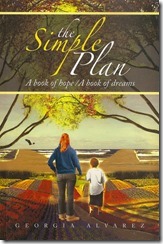 "Wings of Eagles: The Joseph Alvarez Organization for Seriously Ill Children," founded in 1993, seeks "to relieve the financial burden of families" faced with life-threatening illness. "There is an 85 percent divorce rate," writes Georgia Alvarez, "among families with seriously ill children. If we could relieve the financial burden of families, help pay the costs that insurance, that Medi-Cal don't begin to cover, maybe the family could weather the emotional storm they would be faced with."

Georgia Alvarez is intimately acquainted with that "emotional storm." Born and raised in Princeton, she lived "on a two-thousand-acre walnut ranch in which my husband, Alberto, is the shop supervisor." With housing provided (even in their moves "from Butte City, to Chico, and then to Nord") the couple and their children had few real worries--until the doctor's phone call in 1989.

Joseph, then eight, was diagnosed with "acute lymphocytic leukemia with a Philadelphia chromosome ... so rare, that only ten children are diagnosed with it a year," all males. Joseph was terminal, one of his doctors said, and "even with a bone marrow transplant, he only had less than 20 percent chance for survival."

What happened next, the family strains, the tears, Joseph's care for others in the midst of his own pain, Georgia's "spiritual dreams" and a new relationship with God, are all recounted in "The Simple Plan: A Book Of Hope/A Book Of Dreams" ($19.99 in paperback from Xlibris; also available in Amazon Kindle e-book format). There's a section of family photographs, too: This happened to a real family, and it nearly tore them apart.

Despair and hope played tag. Before the bone marrow transplant (his younger sister Mary was the donor), Joseph underwent repeated full-body radiation and harsh chemotherapy. The transplant seemed to help, but then Joseph relapsed. His mother described him as wise beyond his years. At one point Joseph said to her, "I'm an angel, and God sent me down to earth to teach, but now my job is done." He died early in 1991.

Thanks to an article in this newspaper, strangers began to make donations to help the family. Two years later, Georgia, with other volunteers, established Wings of Eagles, an ongoing memorial to a little boy whose life touched so many.

Chico novelist explores the secrets of the asylum 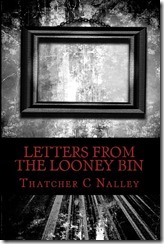 Something happened at the Emerson Rose Asylum in the late 1970s. Everyone left, suddenly; "patients, doctors, and staff completely vanished and were never seen again." Later, as the asylum falls to the wrecking ball, someone finds a series of letters stuffed in a bed, addressed to a "Dr. Quill." The brutal and heartbreaking letters, all from patients, are fictional; but they serve to illuminate not only the abuses one might imagine go on at certain mental institutions, but also the individual lives, where getting inside their heads is hardly imaginable at all.
Though "Letters From The Looney Bin" (self-published, $2.99 in Amazon Kindle e-book format) is not about Thatcher C. Nalley's actual experience doing intake work at Butte County Behavioral Health, it's clear her time there reaffirmed a commitment to help tell stories of mental illness from the inside out. The dozen letters all speak of something brewing at the asylum--maybe a mass escape--in the wake of the terror of Dr. V., the new man in charge.
With compassionate and wise care, those in the asylum can make at least a little progress in stilling the demons. Such compassion was represented by Dr. Huxley, but now he's dead of a heart attack. For one patient, Juliette, the demons are startlingly real. "I don't talk about the demons that come to my room at night," she writes in her letter to Dr. Quill. "I've seen what this place does to others who tell about the things they see. The orderlies come and take them away in the middle of the night. I think sometimes they take their brain, because their minds are gone by morning."
The letters tell of horrendous childhood abuse and neglect, and it's clear from the stories that those in the asylum could not very well be walking the street. Sabel screams, loudly, and yearns for control. The "white coats" allow one of the doctors to alter "my throat to where I cannot make any sounds, no sounds at all." Perhaps it is no wonder that Sabel runs to the nurse's station, picks up a typewriter, and smashes the head of one of those "white coats."
One can say, with full awareness of many meanings here, that this is strong medicine.
Posted by Dan Barnett at 9:00 PM No comments: 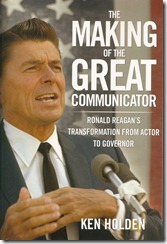 "We had him for three days," writes Chicoan Ken Holden of Ronald Reagan, "in a tiny beach cottage near Malibu. This was in early 1966. Just three of us in a small beach cottage. An unlikely candidate for governor of California, he'd already goofed up a few public appearances. He couldn't seem to get his footing, he looked unprepared, he mangled details." Even his friends were ready to give up. But behavioral psychologist Ken Holden, and his business associate and friend Stan Plog, saw that he just needed a little training.

Holden tells the story of what happened in "The Making of the Great Communicator: Ronald Reagan's Transformation From Actor To Governor" ($26.95 in hardcover from Lyons Press; also available in Amazon Kindle e-book format).

"Only three people on earth knew the full story of what happened in Malibu over those seventy-two hours, how we helped transform a B-move actor into a political giant. ... Ronald Reagan died in 2004, and Stan Plog is just gone, in 2010, so only I'm left standing. I know the full story. I'm the only one left to bear witness."

As conservatives, Holden and Plog found liberal academia little to their liking. So they started a consulting firm and eventually found themselves connected to the Reagan for Governor campaign. Part of what makes the book a delightful read is Holden's keen observations of California politics. "By late '65," he writes, "California Republicans were waging a nasty civil war. As in all such wars, it pitted the old against the new, the moderate Establishment Republicans versus the fiery conservative Young Turks." Who would win?

Set against the backdrop of the Free Speech Movement (Reagan called it the "filthy speech movement") and the Watts riots, the story of Ronald Reagan's ascension is simply fascinating, especially the central chapters detailing how Holden and Plog helped the candidate focus on California issues and articulate clear and concise positions. For Holden, Reagan was the real deal--well read, thoughtful, charming and charismatic. But he needed honing.

Holden and Plog insisted that the campaign stop for three days, and that they and Reagan meet privately, without a word to the press. "None of this was negotiable. Take it or leave it." They took it. 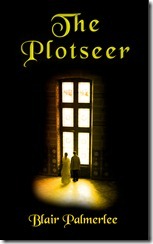 Chico novelist Blair Palmerlee has a penchant for creating alternate worlds with subtle, and not so subtle, connections with our own. "The Universe of Malcolm" begins in Chico but opens up a sci-fi universe in a human hand. Now, with "The Plotseer" (in paperback from CreateSpace; for pricing and availability, contact the author at facebook.com/ThePlotseer or at blairpalmerlee.wix.com/index), he ably realizes an entire civilization.

Palmerlee will be signing copies of his books Wednesday at 7:00 p.m. at Lyon Books in downtown Chico.

Before publishing, the prolific twenty-something writer mounted a Kickstarter.com campaign to raise funds for editorial work. He created a video book trailer, gained 27 backers and exceeded his goal of a thousand dollars. The finished novel reads smoothly and carries the reader into a quasi-medieval fantasy world. Here the people of Cambrian are governed by a heavy-handed church speaking for the Author.

Everyone is part of the Author's story, though only the exalted Plotseer knows the Author's intentions, communicated in an ancient document. The Plotseer's companion is The Teller, "the highest and most holy voice in the Church. ... This man knew so much of the Author's will, his word was almost infallible."

Or was it? The story focuses on young Byron Tanner and the mysterious girl Lucy Prior, and when a new Plotseer is discovered, the church is threatened and Byron finds himself under suspicion, part of a story bigger than his journey from his home town of Chastegate to Redkeep's ecclesiastical headquarters. He and Lucy must contend with the vyce, "the children of evil," at least according to Doctor Ellis in Patriarchal Studies. "They attack innocent people on the open roads, burn churches, and kill our faithful protectors. ... Very commonly, they will be attracted to partners of the same sex. They know nothing of love."

Then there's the Author's Creed, "the written meaning of life," locked in Redkeep. "This single document was the cornerstone of all faith in Cambrian." But what did it actually say? And are the vyce really the enemy? The Hierarchy is intent on preserving its power and economic oppression at all costs, but as lives hang in the balance Byron discovers who the story is actually about--and the Creed's true meaning. It's worth pondering in the real world.