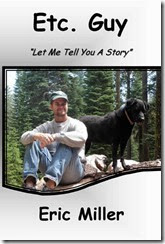 Eric Miller writes that “I’m trapped in a household full of estrogen. My wife and two teenage daughters live in a world that revolves in ways that confuse me; their orbits befuddle mine.” He also admits he’s “a dreadful handyman, terrible mechanic, and a has-been athlete with tired lungs and weak knees.” In other words, this all makes for rich rewards in the things-didn’t-quite-go-as-expected category. Miller’s way of conveying life’s little oopsies had this reader laughing out loud.

These episodes find their home in “Etc. Guy: Let Me Tell You A Story” ($9.95 in paperback from CreateSpace; also for Amazon Kindle), a collection of North State Voices columns from this newspaper as well as personal blog posts (etcguy.com) and more.

Divided into 8 sections, the book presents essays on hanging the family flat-screen TV, joining one’s parents on a bucket-list trip, looking back at 1963 (“I became cordless fifty years ago when Dad snipped my umbilical cord”), and being a field hockey dad (“The girls hadn’t broken a sweat. The game was scoreless, but the parents needed a break—and an oxygen bar with a masseuse”).

The final section is about the “Humor Project,” featuring thumbnail remarks on great humor writers (including Dave Barry, who once said: “Camping is nature’s way of promoting the motel business”). There are also two extended interviews, one with Biff America (Jeffrey Bergeron, a Colorado humorist) and Patrick McManus, longtime humor columnist for Field & Stream and Outdoor Life.

“My wife and I,” Miller writes (his wife is known only as “Hun” in these pages), “parent two daughters. We enjoy watching these future taxpayers gain their independence.” Miller puts “Kate” and “Maggie” to work. “Free labor is a rite of passage for kids and a gold mine for parents. The challenge is getting kids to do what you want.”

Therein lies a tale. Many of them.

Miller will be reading from his book, and signing copies, at Lyon Books in Chico Wednesday, May 28 at 7:00 p.m.

Sacramento-based Terris McMahan Grimes, who grew up in West Oakland, has received the 21st Annual Northern California Publishers and Authors first place award for general fiction. Her novel traces the life of an African American family in Oakland, told by its youngest member, Bernadine.

“We weren’t Ozzie and Harriet or anything like that, but none of the families living in Chestnut Court projects in 1964 were. We were just a plain ol’ family with a daddy who went to work early in the morning carrying a lunch pail, and who came home after dark all covered in creosote, a mama who worked for a white family up in the Oakland hills, and two girls, me and my sister Chantelle. She was thirteen. I was eleven.”

“Smelling Herself” ($15 in paperback from CreateSpace; also for Amazon Kindle) plunges the reader into Bernadine’s life. Her parents love her, but there were whuppins. “Whuppins were like kid taxes we paid with our behinds. We didn’t get ‘spankings’ either. … Our mamas wrapped extension cords around their hands or made us strip switches from the trees outside our bedroom windows, and they used them to leave welts on our bare arms and legs, make us do holy dances, shout out the Lord’s name, and make promises we knew we couldn’t keep.”

The book’s title means “acting beyond your age,” but Bernie is confronted with adult decisions when she hears Jessie Mae, Chantelle’s age, being horribly abused upstairs by her mother’s “boyfriend,” a man called “The Sheik.” Bernadine must confront the night, and her fears, and though there is ultimately hope born of tragedy, the tragedy is real.

“People are always taking about ‘broken heart’ this and ‘broken heart’ that, but let me tell you, it’s not just the heart that breaks. Your eyes scale over, stop working, and you go blind; your lungs seize up, stealing your breath away; your stomach somehow finds glass to grind; your skull cracks open, letting flies get at your brain; and for one tiny second, you wish you were dead too.” 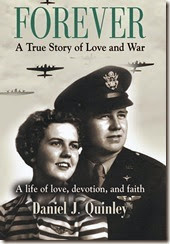 Cecil and Margaret Quinley lived in Chico 57 years. Active in Veterans of Foreign Wars and known locally for creating Veterans Day and Memorial Day exhibits at the Chico Mall, the couple celebrated 70 years of marriage in a 2009 ceremony at St. Patrick’s Church in Fallon, Nevada, where they now live. They adopted three sons and one of them, Daniel J. Quinley, a graduate of Butte College and EMT-turned-writer, has published their story.

“Forever: A True Story of Love And War” ($19.95 in paperback from Feather Merchant Publishing/Booklocker.com; also for Amazon Kindle) integrates “creative non-fiction” first person accounts during the war years with many of the actual letters the couple wrote each other. “Every effort was made … to compile the most accurate account possible in the telling of their story.”

The couple married in 1939; “in 1943 2nd Lt. Cecil W. Quinley is the co-pilot of the ‘Feather Merchant,’ a B-17F bomber assigned to the 381st Bomb Group” operating out of Essex, England. A veteran of 14 combat missions, Cecil was “shot down and injured on the 14th mission and imprisoned in the infamous Stalag Luft III and Stalag VII-A. He survived a winter ‘death march’ when the Germans evacuated the former camp as the Russian Army neared.”

Margaret herself “survived the blues in Sacramento as depression over her imprisoned husband set in. She feared for Cecil’s life in a far-away land and became active with the American Red Cross to contribute to the war effort and stay busy.” The two reunited after the war and came to Chico for the next leg of their long journey together.

The book’s dozens of historical photographs and sweet love letters bring the reader into the lives of real people in a time seemingly so long ago. We are with Margaret in 1943 when she receives a notice that her husband is missing in action, and with Cecil on the forced march. It is an enduring tale of Margaret and her “honey-bun.” 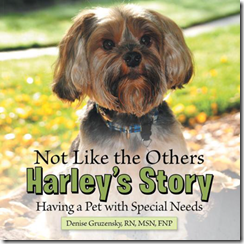 Denise Gruzensky is a family nurse practitioner and now a children’s book author. “Not Like The Others: Harley’s Story” ($15.95 in paperback from LifeRich Publishing; also for Amazon Kindle) is subtitled “Having A Pet With Special Needs.” Gruzensky, who lives in Paradise with her husband Denton, lets Harley tell his own story. Replete with full-color photographs, the book is aimed at elementary-school kids.

“I was born in October 2004,” Harley says. “My first family couldn’t keep me so before I was 1 year old I was adopted.” The Yorkshire Terrier admits “I was scared at first, not knowing if I would get to stay, but I learned to love and trust the people who loved me.”  It’s evident from Denise’s smiles that she and Harley bonded deeply; then “the same month I turned 5 we moved to California.” Denise had roots there, and that was where Harley first met Denton.

When Harley was six “Denise started noticing I was drinking more water and having pee accidents. … She called the clinic and I went to see them. The doctors ran some tests and found out I had diabetes. The doctors gave Denise some special instructions for giving me my medicine, called insulin. It is given to me two times a day as a shot. I was scared again, not knowing if I would be sent away because I would be too much trouble with all of my problems. Maybe I would have to leave my home and the humans I love.”

But “Denise and Denton found out how to take care of me. They read and looked at the computer to learn about dogs and diabetes. My food and treats were changed to help my sugar levels but I still get to eat my baby carrots.”

The book introduces other animals with special needs. Otis is deaf; Hope has three legs; Abby has asthma. For Harley, “my life might have been very different if my humans had not decided to love me unconditionally, which means no matter what.”