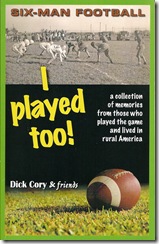 You don't have to be from Nebraska to appreciate Dick Cory's latest, "I Played Too! Six-Man Football: A Collection of Memories From Those Who Played the Game and Lived In Rural America" ($20 in paperback from the author at ubangarang@sbcglobal.net).

Anyone with small-town sensibilities will resonate with "those Friday nights when six did the work of eleven. . . . // farm boys and town boys finding common ground / in August heat and two hundred pounders plowing into / tender flesh and bone . . . seniors teaching freshmen not to whine. . . . " These are the words of Larsen Bowker, one of thirty-six contributors who, writes Cory, "played, cheerled, refereed and were fans of six-man football."

In an email, the author writes me that "six-man football was the brainchild of Stephen Epler, who designed football for schools too small, too poor, or too distant to be consolidated to provide eleven-man. While teaching at Chester, Nebraska high school, he staged the first high school game on September 26, 1934."

Cory remembers his own high school days. "Community spirit and pride were wrapped up in the game," he tells me. "This spirit has all but vanished in these mid-America communities, which now resemble ghost towns. . . . Al Darby, who starred at Durham, represents California and Duane Falk played at Stanton, Iowa. All the rest came from Nebraska at a time where participation peaked at 189 teams in 1953, my senior year."

Cory includes a chapter on the rules of the game, one of which says that "When one team is 45 or more points ahead at the end of the first half . . . the game is ended immediately." These were the days before plastic helmets and faceguards.

As Falk notes in his chapter, "My wife tells me that our sports exploits have gotten better with the years. We seem to win more games by wider margins as the years pass by and of course we are instrumental in our team's success." Replete with old black-and-white photographs, "I Played Too!" lets the reader in on some of those stories.

Northstate author on how the mind can heal the mind 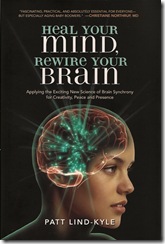 The premise of Patt Lind-Kyle's new book, "Heal Your Mind, Rewire Your Brain" ($26.95 in hardcover from Energy Psychology Press) is simple: "The brain's inherent transformational process can serve as a model or guide for how we can train our mind to be less intense and busy, and free from chaos, fear, pain, and inner wounds."

For the Nevada County therapist, effective training blends Buddhist meditation; the results of research on brain waves and neurotransmitters; and the use of the "enneagram" (a chart showing nine areas of personality structure popularized in the West by the Russian mystic G.I. Gurdjieff).

Lind-Kyle will be discussing her techniques this Saturday at the Chico Barnes & Noble from 2:00 - 4:00 p.m.

"Heal Your Mind" is subtitled "Applying the Exciting New Science of Brain Synchrony for Creativity, Peace and Presence." "Synchrony," Lind-Kyle writes, "is what integrates the neural pathways. When you are in stress, your emotional responses stop the Flow."

She identifies "four brain-wave frequencies--beta, alpha, theta, and delta," each associated with a neurotransmitter, such as serotonin with delta waves or dopamine with beta. The first half of the book investigates these relationships; the second part is a practical guide to deep meditation aimed specifically at each of the four frequencies. (A series of guided meditations, voiced by the author, is available on CD or in mp3 format from www.brainchangebook.com.)

The author writes that human brains evolved, adding "new brain centers" to the original "reptilian or old brain." These centers ought to work in harmony, directed by the prefrontal neocortex, the newest part of the brain, but there is "a fundamental flaw: The brain has not been redesigned after the addition of new brain centers at each stage of its evolutionary development, leaving us with a somewhat inelegant design. The result is that there are communication flaws that affect the natural energy flow circulating within the brain." That makes it hard to switch off the old fight reflex in stressful situations even though it's counterproductive.

Lind-Kyle believes that intentional mind training can help the brain rewire neuronal pathways, thus making it possible for all the brain centers to act in harmony and for various personality types to find "peace, kindness and happiness." It's food for thought. 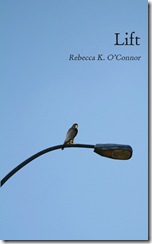 When Rebecca K. O'Connor was eight, her grandfather pointed out a peregrine falcon on a rooftop in Riverside. "She's a falconry bird," he said. "Hear the bells? Look at the leather straps on her legs. They're called 'jesses.'"

Decades later, having endured an absentee mother and abusive stepfather, O'Connor (www.rebeccakoconnor.com) has a peregrine of her own. Though she has flown other birds, "falconry is different. Hunting with a bird is harder, more dangerous," and many fly away or are killed.

Her story is told in "Lift" ($18.95 in paperback from Red Hen Press). Like the talons of a raptor, the deeply felt words of the memoir dig into the reader and won't let go.

The author's multi-media presentation, "Winging It: Living a Life Shaped by Birds and Words," will be featured Saturday at 7:00 p.m. at Lyon Books in Chico.

She calls her bird "Anakin." As in Anakin Skywalker, Darth Vader. He "is so light on my glove. We weigh them in grams, because ounces aren't precise enough to judge the incremental changes in their airy bodies. He is slightly smaller than a crow. . . . I've bought him to hunt desert doves."

O'Connor deftly weaves flashbacks with her sometimes fumbling attempts to train Anakin. "Predator worship is an odd thing, " she writes, "but perhaps not so odd for a woman. I am aware that I am more prey than predator. . . . I am no stranger to being stalked."

It is early on in training (and who, precisely, is being trained?) "The falcon and I look at each other, both startled. Then he bows his head slightly over the bird in his feet, snaps the neck and looks back up. He allows me to meet his gaze, seeing deep into his falcon's eyes and I understand that I could keep this predator on a line forever, but he will never be my pet. Over that shared look our relationship changes just a bit, because suddenly, we both grasp an obvious truth. I am looking into the eyes of a wild peregrine. It's so soon, only ten days, but it's time to let him fly free."

There's a lesson here, and it's not just about falcons. 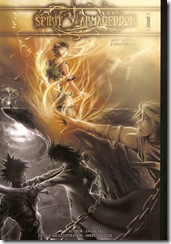 Graphic novels are comic books for grown-ups. Full length, immersive, complex, they meld a particular (or peculiar) illustrative style with words that take on the big issues of life. Thus it is with "Spirit Armageddon" ($20.95 in paperback from www.iuniverse.com) by Zacheas Hertz, the pen name of twenty-year-old Chico writer Travis Henderson. Coupled with the manga-influenced design and black-and-white illustration of Serpentwitch, the story is the first in a planned series exploring a terrible human paradox: Is it the case that one must become violent to stop violence?

Henderson writes in a news release that he is a civilian pilot, recently enlisted in the Air Force, whose "true calling is with flight, but I find my pen has the strange ability to fly over paper" as well. "In both endeavors I lose myself to the awe and wonder of the grand scheme." The author will be signing copies of "Spirit Armageddon" at Lyon Books in Chico on Thursday, November 19 from 6:00 - 8:00 p.m. as part of the bookstore's gathering of local writers, dozens of whom will be honored at the store through early December.

Zacheas imagines an earth in which falling asteroids are having a strange effect. As one character explains, "Random people from all over the world have been gaining powers. . . . The power we receive has an unfortunate side effect in many people, insanity fed by their own hate, fear, greed or what is most commonly called evil."

These "medians" ("it is what the media called the first ones and the name kinda stuck") wreak violence everywhere, and the government's Armageddon Project must stop it. Some medians can be rehabilitated, relocated, but others must be killed. "No therapist can fix them, no jail can hold them, all we have left is to consider the well being of the people around them." And so young Mino, herself imbued with the asteroid's powers, despised by others from her childhood, must now consider saving the very people who hate her.

There are lighter moments in the story, but many panels depict stylized violence, and the sounds--zziing, dharr, sett, sett, sett, srakh--rattle in the reader's head as power confronts power. The final question continues to resonate: "What have we all gotten ourselves into?"