The human side of the Sacramento River 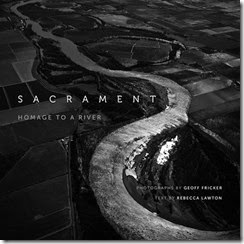 Retired Butte College photography instructor Geoff Fricker has teamed with writer Rebecca Lawton for a mesmerizing exploration of the human side of the Sacramento River. Fricker’s work is housed in the San Francisco Museum of Modern Art, the Crocker Art Museum, and other repositories; Lawton, and essayist and novelist, was one of the first female river guides through the Grand Canyon.

The book is called “Sacrament: Homage To A River” ($45 in hardcover from Heyday), containing striking full-page black and white photographs and powerful text detailing the changes that have come to the “Sac” and its tributaries. It is, says Fricker in the Preface, “a contemplation of water and our often contradictory connection with it. … I am inspired by the slow but certain path of the river—which meanders in spite of all our attempts to control it.”

Though several images focus on the “natural” world—from water flowing over fossilized ammonite in Chico Creek, to Jed’s point, “where Jedediah Smith first sighted the Sacramento River”—most show the intertwining of that world with the human. There’s a 1997 image of collapsed Butte County Bridge #17 in Centerville; 132-year-old brackets “used to harness a wooden flume on the basaltic cliffs of Table Mountain”; and Labor Day tubing on the Sac in 1999.

For Lawton, this is a cautionary tale. “There is no going back to life on an untamed floodplain where conjoined freshwater marshes teemed with wildlife, human diversity, and aquatic life in unimaginable numbers.” But there may be a way forward in what she calls “cooperative restoration,” which includes “conserving and recycling water” and “reestablishing ecosystem health.”

The reader is confronted afresh with the often heavy human hand on the swirling waters of the Sacramento; the tone is something like hopeful sadness. “If there is a river whose potential for biological richness and natural wealth can lead us to wholeness, it is the Sac. El Rio del Sacramento. River of redemption. Miraculous river.”

For Chico novelist, dragons have to eat, too 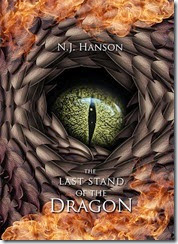 A human named the dragon “Jade,” and that will suffice. Perhaps the last of her kind, she was forced out of her homeland to live in Romania’s mountains. Hungry, she “emerged from the blackness like thief in the night. Over nine feet tall, 25 feet long, 1000 pounds approaching like a big cat.” The fire she breathed also provided lift (when the fire ran out, the dragon was grounded). She was forced to steal livestock from the dreaded but inferior humans. It had come to this.

Her story is told, from both the human and dragon perspectives, in “The Last Stand Of The Dragon” ($10.99 in paperback from Tate Publishing, tatepublishing.com; a digital download is also available) by N.J. Hanson. According to a news release, the Chico writer sets his story in the waning years of the tenth century, before dragons became merely the stuff of legend.

The central human character is Richard, “the squire of the local lord for the village at the foot of the Carpathian Mountains. His lord was Sir Ardose, a man beloved and cherished by all the people in the village.” (But Ardose, it turns out, is no saint.) At first Ardose seems not to believe Richard’s report of a dragon sighting, but soon enough the threat becomes real as Richard and others in town are forced to fight for their lives to put an end to the dragon.

Jade must contend not only with the humans but with the sudden appearance of a haughty male dragon out to destroy their eggs if the embryos are male. There must be no competition.

As for the humans, several of them, spurred on at the local tavern, intend to climb the mountain and kill Jade. Hanson uses contemporary conversational style (Lenney tells his friends: “I don’t know, guys. I mean, did you see the size of that thing?”) but this is no fairy tale. The battles are fierce and gruesome, with more than one human head being bitten off. The landscape is strewn with corpses. There are no winners here, perhaps even for those who sacrificed for love.

Magalia couple goes to the dogs 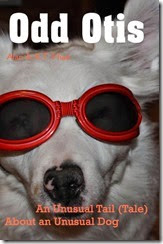 If Alan and Kathi Hiatt thought retirement would be dull and boring, it’s clear they had nothing to worry about. Brought up in Chico and Gridley, the Hiatts have become “dog people,” adopting a trio of Basset Hounds (Winchester, Abby, and Lucy) and one white, 45-pound, long-haired Australian Shepherd mix with quite a story.

Alan was tooling up the Skyway in his old Jeep when he spotted the dog “crisscrossing the double yellow line in the middle of the road” near a busy intersection. Alan turned around and was able to scoop him up, and then it happened. “I will never forget the instantaneous warm and powerful jolt that swept through me when this dog wrapped all four legs around my middle, laid his head on my shoulder, and then literally body-melted into my chest.” Otis, it turned out, had been blind and deaf since birth.

“Otis followed Alan everywhere he went and was constantly begging for lap time,” Kathi writes; “Alan, on the other hand, couldn’t seem to be in the same room with Otis without petting or doting on him.” He was smitten. Kathi created a “lost dog” poster and Alan reluctantly put it up around town.

Days later, a woman named Tina, the rightful owner, contacted the couple. But then, seeing the incredible bond that had formed, she graciously agreed that Otis should belong to the Hiatt household.

What follows are tales of new relationships formed (with Kathi and the Bassets); tossed popcorn nights (“only do this when the wife’s not home”); and great Otis yawns (“it does give me the opportunity to check out his teeth”). Told with humor and down-home charm, it’s the on-going story of a special needs dog and an encouragement to others to consider adopting. “Through him,” Kathi writes, “we have reinvented ourselves.”

Posted by Dan Barnett at 7:40 PM No comments:

Paradise author has a message for kids 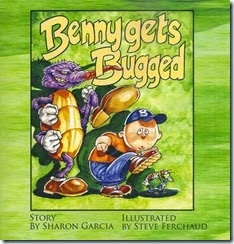 For Sharon Garcia, it began in a moment of anger. The Paradise resident stomped on a beetle in frustration and then, according to a note about the author, “after a moment of guilt she was relieved to see the insect run out from under her foot, alive and well.”

That set her to thinking, and the thinking eventually became a children’s book, “Benny Gets Bugged” ($13.99 in paperback from CreateSpace; visit facebook.com/bennygetsbugged), with full color illustrations by another Paradise resident, Steve Ferchaud, and book design by Son Rey Garcia.

The story begins on the playground when “Mean Mabel” demolishes Benny at a game of Four Square. “She continued deflating his moment of triumph by leading the other players in a taunting chorus or two of ‘Benny, Benny, he’s not worth a penny.’”

Needless to say, “Benny was in a rotten mood and he had to go #2 really bad.” Sitting on the toilet, Benny spots a beetle underfoot and, taking out his anger, squishes the bug. “Benny avoided lifting his foot to look at the mess he’d made of the innocent bug. The longer he sat there the more he pondered his cruel act.”

Just imagine: “What if I was tiny and bugs were big? What if I was just walking home from school … thinking about the cookies and milk waiting at home for me on the dinette table … when a huge angry bug decided that I deserved a good squashing?”

Ferchaud matches the fantasy with nightmare pictures, spread across two pages, of giant spiders and more. Shaken, Benny “thought about the poor little mangled beetle under his foot. Had it cried out to be rescued? How could he ever forgive himself for being meaner than Mean Mabel?”

Well, the beetle escapes unscathed. Later, Benny learns that bug behavior helps them survive. As his teacher says, “They do look and act different than us, but different doesn’t mean bad or better. Different just means not the same. Whenever we encounter something that is different it’s an opportunity to learn and explore something new.”

As for Benny—just call him the “bug boy”!

Paradise author on living the life, losing the weight 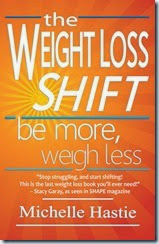 “Standard weight loss advice,” writes Michelle Hastie of Paradise, “is built on the assumption that there is a cookie-cutter formula” to “getting the weight off—very rarely does it realistically concern itself with keeping it off.” Hastie, a weight loss coach, takes a different approach, spelled out in an easy-to-digest book that turns conventional wisdom on its head.

“The Weight Loss Shift: Be More, Weigh Less” ($14.95 in paperback from Absolute Love Publishing; also for Amazon Kindle) begins not with doing, but with being. “Getting your ideal body isn’t about what you do, it’s about how to think, feel, and act. It’s about who you are. To get the body you truly want, you must become one with the body you have now.”

In motivational chapters and insightful homework assignments Hastie makes the case that “self-love and self-care lead to weight loss, not weight gain. If you can’t learn how to love and accept your body just as it is, then you will continue to chase an impossible dream.” Your body knows what it needs, she says, and we need to listen. “If it says it wants pizza, eat it and then see how much pleasure an satisfaction you get. If it’s a lot, you know that pizza is something your body enjoys and should have.” If not, “lessen the amount … to serve your body in the highest way.”

What should our lifelong relationship with food be? Rather than see food as so many (ugh!) calories, see it as providing “emotional vitamins,” like nourishment and comfort (but not as a substitute for the healing work needed in other parts of our lives). “In order to create the most magnificent life for yourself, you have to get to the point where you can be happy just being you.”

As our view of ourselves changes, we will eat better and move more as we grow into what we are. The weight will come off.