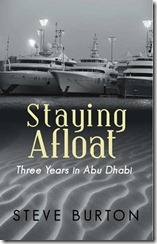 "My Chico existence," Steve Burton writes in an email, "dates back to 1971." His website (http://stephencburton.com) notes that "he spent twenty years in the real estate development and construction industries, followed by eight years in the maritime industry." Now living in the Bay Area, he and his wife Pamela became "expats" by moving to Abu Dhabi in the United Arab Emirates in 2007. Money was no object back then. Burton and his and other teams were tasked with building a world-class marina, hotel complex, and Formula One racetrack in just thirty months. Piece o' cake--well, sort of--when just a nod from a member of the Royal Family takes care of any red tape.

But day-to-day living in the area, one of the richest venues on earth, was not exactly a cakewalk. That's when Burton's sense of humor kicks in, and his wry observations humanize a jaw-droppingly lavish project without peer in the world. "Staying Afloat: Three Years In Abu Dhabi" ($17.95 in paperback from iUniverse; also available in Amazon Kindle and Barnes and Noble Nook e-book formats) is part history, part travelogue, part memoir. But it's also a serious reflection on cultural diversity and economic realities, especially as the worldwide recession began to affect even the Emirates after Burton's project was completed.

"The $125 million Yas Marina and quay in the channel immediately outside the entrance to the marina were designed to handle 146 yachts up to 325 feet long. ... For comparison, a multi-billion-dollar Los Angeles class nuclear submarine is 353 feet long. Yas Marina is to date the most high-tech marina facility ever constructed. The F1 racetrack wraps around five sides of the fifteen-sided marina and provides yacht owners and their guests with an unobstructed view of much of the race." Monaco has nothing on Yas.

In the end, "the Sheikhs' expectations were met. ... Yas Marina and its yacht club have been added to the esteemed list of premier global yachting destinations. ... The inaugural Abu Dhabi International Yacht Show in 2008 was timed to highlight the construction of the Yas Marina." Burton and his group had done it--with just weeks to spare.

It's great yacht reading, even if some of Burton's all-too-human gaffes are, uh, a little dinghy. 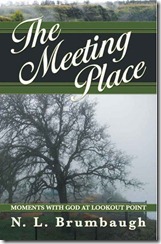 Lookout Point is "nestled next to the Skyway," where "Butte Creek is barely visible when gazing down from the canyon rim at the Lookout. It meanders like an ebony thread between the cavernous walls of the canyon. ... On cold, misty days, mountain ravines are hidden from view by thick layers of fog."

This was the place Norma Brumbaugh visited, for an hour each week for a year, starting with Good Friday 2009. "The Lookout became my place of release, its view inspiring me to contemplate and pray." There she found "solace and healing. I received in a seamless blend the awe of creation knit with my belief in a loving and caring God." Her journal has become "The Meeting Place: Moments With God At Lookout Point" ($17.99 in paperback from Inspiring Voices; also available in Amazon Kindle and Barnes and Noble Nook e-book formats).

The author "is still active in agriculture in the Chico area. She is a mother of five, grandmother of two, reading specialist, and teacher. For most of her life, she has been active in the church." Though she has been involved in many ministries, "her passion ... is to help draw people to find God in an intimate relationship." The author's own deep emotion and spiritual questioning are recorded in each of the meditations in the book. She is faced with the loss of a marriage, the estrangement of a daughter, job stresses, and her own anger and fear.

Influenced by the Christian mystical tradition, Brumbaugh's meditations range from poetic reflections ("the sun--hidden for these moments: / the brightness subdued in grey screen / but your glory is here--I feel its warmth. ...") to contemplation ("It is interesting that even in my fifties, I am still learning many lessons about life. People are complex beings. To be healthy in our human emotions is formidable at times").

"Father," she prays, "I want to think about you. Draw my thoughts to you. Fill me with your presence. Renew my mind. Speak truth to me. Expose my wrong thinking, wrong conclusions, and areas of blindness."

Brumbaugh finds comfort in Jesus Christ, the gift of Christmas, but never complacency. There is much to learn. At Lookout Point, she realizes, "it is good to be here." 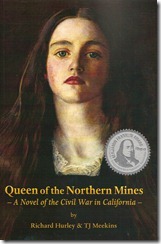 Though Richard Hurley's career in computer-based multimedia took him to the Sierra foothills, his love of history never left. Along with with co-author TJ Meekins, whose work took her to the Tahoe National Forest in Nevada City, the two have produced a compelling historical novel and bittersweet love story that will have readers turning pages far into the night.

"Queen Of The Northern Mines: A Novel Of The Civil War In California" ($16.95 in paperback from Bear River Books, bearriverbooks.com) spans a short but eventful four years, from November 1860, centered mostly in the area of Nevada City (then called "Nevada," the "Queen" of the title). The authors interweave the stories of Virginian Will Stafford, the handsome 28-year-old attorney, with that of Chinese mine owner Ah Tie, Austrian musician Peter Kessel, and Nisenan Maidu orphan Nutim.

The book was named a finalist for the Benjamin Franklin Award from the Independent Book Publishers Association. The cover, "Portrait of Sophie Gray," from the artist John Everett Millais (1857), beckons the reader to settle in to a story of love found and love lost, a story of divided loyalties, both personal and political, and to a tale that mixes the absurd (think E Clampus Vitus) with the unutterably sad (war's devastation).

Will arrives in Nevada (the town) having helped dispatch a group of highway agents intent on plunder; he finds work (and friendship) with a judge, and he finds his attention drawn to the Missouri House, whose caretaker, 31-year-old widow Molly Hatfield ("richly endowed with wisdom and beauty") sparks a decided personal interest. Complicating matters, Molly's daughter Ida, 15 years old, is also smitten with the young lawyer.

People have come from all over the country (and the world) to have a go at the Northern mines. There is decided Yankee sentiment in Nevada, and Rebel sentiment in Grass Valley. When Will returns to Nevada, wounded, from fighting for the Confederacy in his home state, he must face a profound reality. If Jefferson Davis is to survive, he must have California gold. A new shipment from the mines is on its way, and Will must decide the meaning of honor, friendship and love.

Does a uniform lift him above being a mere highway agent? 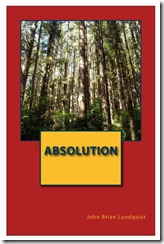 John Lundquist, who works at Enloe Hospital, writes novels on the side. He tells me "I like small towns and secrets that need to be explored," especially those little communities near the Sacramento Delta area.

The hero of "Absolution" ($11 in paperback from CreateSpace; also available in Amazon Kindle e-book format) is Jake Coulter. Never one to settle down, the handsome and confident Coulter wants to be free as the wind in his travels. But, sidelined by engine trouble in the Delta area, Coulter's life is about to change forever.

Where to get service? "The next town up the road was Royalton. According to the legend on the back of the map, the population for the town was listed as eight hundred and sixty." Back on the road, Coulter suddenly realizes that another truck is aiming to run him off the road. Coulter takes evasive action; eventually the other truck "ran clear off the road, over the drainage ditch, down the slope to the water, and ended up with its nose end in the lapping water of the Sacramento River."

Coulter determines to report the incident in Royalton and then mosey right along. It doesn't work out that way.

The town and surrounding countryside are pretty much owned by Richard Davidson, a man who wants control. In that regard his son, Billy, is quite the problem. He hates his father and is generally not to be found except when he chooses to run folks off the road for sheer sport.

Billy not only survives the truck incident but now wants Coulter arrested for hit-and-run. Then, as if on schedule, a series of mysterious murders begins. First a prominent banker. Later will come an attorney and a real estate agent. Davidson is afraid Billy is behind them and has decided that Coulter is the guilty party. And he wants his hand-picked sheriff to kill him. Davidson is intransigent in the face of contrary evidence, but Coulter is equally intransigent when it comes to his reputation. If it's not Billy, who is the real killer?

The tale focuses on action, but also what it costs to be a person of integrity. It's a fun, fast-paced read, just the kind of story for a meandering trip through the Delta.

"Grooving with a healthy rhythm of yeses and nos" 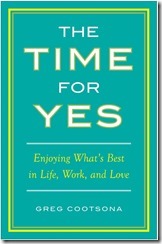 In "Say Yes To No," Greg Cootsona, associate pastor for adult discipleship and college ministries at Bidwell Presbyterian Church in Chico, found that taking on too much--saying "yes" to too many things--undermines the richness of life we were created to experience. Now, a just-published companion volume focuses on discovering the yeses we ought to embrace.

"The Time for Yes: Enjoying What's Best in Life, Work, and Love" ($5.99 in paperback from CreateSpace; also available in Amazon Kindle e-book format) recognizes the importance of "grooving with a healthy rhythm of yeses and nos." This is the place "where notes and silences, beats and spaces, produce beautiful music and where we move with the heartbeat of life. Here," he writes, "I've learned from the insights of researchers and writers who emphasize that our lives produce excellence when there is a rhythm of rest and work. As a percussionist would say, when we live this rhythm, then we groove. (Since I'm a percussionist, I guess I can say it.)"

Cootsona will be speaking and signing copies of his book this afternoon at 4:00 p.m. at Lyon Books in Chico.

But before one can begin grooving, we must listen. "Our yes implies that we hear the Voice of God calling us uniquely and specifically to do God's mission of love and justice in the world." Next comes "testing," "a process that verifies the validity of what we've heard." Then, at last, it's time to groove.

These steps work themselves out in what Cootsona calls the "triangle" of life, work, and love. "In our personal life, we say yes to what makes sense for the way we are created. In work, we seek to make the world a better place by using our particular gifts and passions for what God wants in the world. In our relationships, we learn how all this makes a lot more sense--and becomes a lot more fun--when we do it with others."

Such a life is a realization of beauty ("excellence, true success, and happiness"). "Through listening for our calling we find he One who calls. I believe God is faithful in calling us."

The book is a fun and practical guide for finding the right rhythms of our lives.