The mystery of William H. Warner 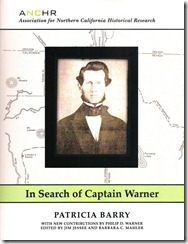 Some things are known about William H. Warner (though not whether the "H" stands for "Henry" or "Horace"). Born in New York on May 8, 1812, he graduated from West Point; became a Army topographical engineer; helped lay out the city of Sacramento in 1847; and, on September 26, 1849, was "killed at age 37 by nine arrows fired by California Indians while exploring Northeastern California mountain passes." He was looking "for a railroad route from the Mississippi River to the Pacific Coast."

In 1987 the Association for Northern California Records and Research (ANCRR), in supporting the Special Collections department at Chico State University's Meriam Library, published "In Search of Captain Warner." Authored by Alturas-area resident Patricia Barry, the slim paperback presented what was then known about Warner. Now, a quarter century later, the renamed Association for Northern California Historical Research (ANCHR) has reissued the book "with new contributions by Philip D. Warner," William's cousin.

The book, edited by Jim Jessee and Barbara C. Mahler, is available in paperback for $20 from www.csuchico.edu/anchr. Philip Warner's additions make for lively reading. He and his wife, Liv, have crossed the country in search of Captain Warner's story. In 2006, one of the libraries connected with the University of Rochester put sections of Warner's diary on the Internet. Philip and Liv visited there. "What a surprise!" he writes. "As a rather unemotional, nerdy engineer, I was not ready for what happened when I picked up William's leather-bound diary. Holding the book in my hand (where his hand must have been many times) was like a handshake. I was overcome by emotion."

Philip's research is presented in a series of letters to his cousin. Among the observations: "I live in retirement in Polk County, Florida, near where you were stationed during the Florida Indian Wars, 1836 to 1838." Captain Warner's diary is laconic; the new book contains excerpts from the "long-lost journal" (along with helpful commentary) but questions abound. What was his relationship to younger Susan Moggoffin, who mentions him eleven times in her own diary? Perhaps his uniform impressed her.

Barry had called Warner "the formless, faceless man" (the only known photograph of him graces the book's cover). Now, with Philip Warner's help, some of the shadows have been dispersed.

Eerie novel of an alternate Alturas 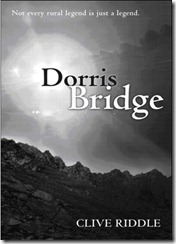 Modesto writer Clive Riddle founded a health care business information company and the work he does is decidedly non-fiction. He grew up in Alturas, in northeastern California, and attended Shasta College for a time (his son went to Chico State University). What a setting to create a story weaving memories of a small-town boyhood with half-whispered legends, mixing in a murder mystery with hints of the supernatural.

"Dorris Bridge" ($19.95 in paperback from HealthQuest Publishers; also available for the Amazon Kindle and in formats compatible with Barnes and Noble Nook and most other e-readers) is the name of a small and dying town near Alturas in fictional Paiute County. The author explains on his website (www.dorrisbridge.com) that there was a real Dorris Bridge, renamed Alturas in 1876, but that the Dorris Bridge of the novel is not the real Alturas (since characters in the story often refer to Alturas as well as to Chico and Redding).

The aptly-named Riddle will sort things out when he is interviewed by Nancy Wiegman on Nancy's Bookshelf this Friday, January 27 at 10:00 a.m. on KCHO in Chico (Northstate Public Radio, 91.7 FM).

The moral center of the tale is Randall Burgess, Chief of Police of Dorris Bridge. One of his sons, Kyle, is about to graduate from Paiute High School. A good kid for the most part, he is not averse to drinking with his buddies (Riddle calls it the "national pastime" in Dorris Bridge) and his practical jokes are constantly landing him in trouble. It's the mid-Seventies, and the author revels in mixing in contemporary movie and music references. To capture some of the mindset of the times, there's even sheet music for an original (off-color) song.

Then there are the Lights. An aging Paiute, Toronto Highsmith (Tornado for short) is convinced that he sees strange Lights during his benders. A sober Kyle sees them, too, but mostly from a distance. And they seem to be associated with a series of hit-and-run murders that take place near the homestead of the most powerful man in the county.

Add the mysterious disappearance of a Japanese-American decades earlier, a group of fundamentalist Mormons and Basque wanderers, season with a surprise ending, and what one has is definitely not Mister Rogers' Neighborhood. 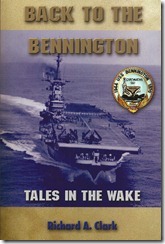 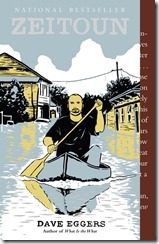 For novelist David Eggers, the story of Abdulrahman and Kathy Zeitoun was compelling. New Orleans residents, they had survived Hurricane Katrina, which struck in late August of 2005, but that was almost beside the point. What happened in Katrina's wake, the indignities visited upon Kathy's husband, a successful painting contractor in the city, raised disturbing questions, about due process, about the treatment of Muslim citizens, about how people respond when things fall apart.

"Zeitoun" ($15.95 in paperback from Vintage; also in Amazon Kindle, Barnes and Noble Nook, and Google eBook formats) is told from the couple's perspective. Eggers wisely focuses on one story--how a scrupulously honest and hard-working Syrian American could be suspected of being a thief and terrorist and made to suffer for those false beliefs.

Perhaps Zeitoun (pronounced "Zay-toon") had hoped for too much. "The country he had left thirty years ago had been a realistic place. There were political realities there, then and now, that precluded blind faith, that discouraged one from thinking that everything, always, would work out fairly and equitably. But he had come to believe such things in the United States.... But now nothing worked. Or rather, every piece of machinery--the police, the military, the prisons--that was meant to protect people like him was devouring anyone who got close."

Zeitoun (he is known by his last name) stayed behind as Katrina approached. Kathy and their four children moved in uneasily with relatives in Baton Rouge (and would later spend time with friends out of state). Windows started to break in Zeitoun's two-story house. "There were unknown thumps everything. The bones of the house seemed to be moaning under the strain of it all. The house was under assault."

The neighborhood was covered in nine feet of water. Zeitoun paddled his aluminum canoe from house to house giving assistance, enlisting the aid of others. But soon another assault would come, and the lives of the Zeitouns would forever change.

Finding the right man in the new year 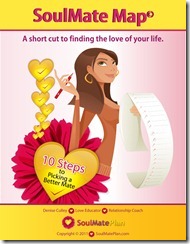 Relationship educator Denise Culley of Paradise has been there. In her search for "Mr. Right" she filtered possible mates by outward appearance and "chemistry." The search proved futile and the pile of failed relationships grew. Over time she found a better way and now has published a workbook and coordinated website based on a key insight for the female:

"Accept your role as 'Man Whisperer.' A Man Whisperer is a woman who knows that her role is to guide a man to success as a partner, by cleverly teaching him what he needs to know. Assuming he knows how to be a great partner to you or expecting him to 'read your mind' in your relationship is living on fantasy island and will eventually blow up one day."

The "SoulMate Map: 10 Steps To Picking A Better Mate" ($19.97 in paperback and popular e-book formats, published by Relationships 123, found on SoulMate Plan's website, http://soulmateplan.com) "is for women who are either stuck, need inspiration, trying to let go, or ready to finally have great love in their life!"

The first step to success is, paradoxically, to stop dating, or at least dating seriously. During that respite Culley urges her readers to complete a series of lists contained in the workbook which are designed to focus on the attributes the reader is really looking for in a man. Culley shows how to combine the lists (which include what the reader admires in others as well as self-assessments) into a "SoulMate Map." "Sometimes," she writes, "we ourselves can't see when a man isn't good for us because we are blinded by love, or what we think is love."

The idea is to create a new lens through which to see men. Culley finally found her soulmate, but at first she thought he was kind of a "dork" and wasn't really attracted to him. They became friends and long conversations together began to reveal his deeper qualities, the very qualities she really wanted in her life.

Bottom line: "A man in love will demonstrate a powerful ambition to discover your happiness and deliver it to you. That passion for your happiness is the most reliable cue you could hope for." If you don't know what makes you happy, how can you tell him?