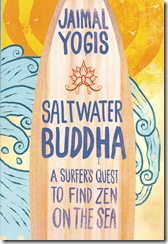 As a high schooler, Jaimal Yogis traded suburban Sacramento life for the call of surfing. He upped and ran away to Hawaii. Here today, gone to Maui.

Perhaps his "New Age-y" parents understood Jaimal's intense boredom and his growing spiritual need. His Air Force dad had been a gourmet chef, a "hippie trapped in a colonel's body," and "he and my mom lived in an ashram in the '70s." Jaimal and his sister Ciel practiced meditation and "I was even named after an Indian saint: Baba Jaimal Singh. And it couldn't have been just coincidence (I thought) that my Lithuanian grandparents' name was shortened to Yogis. I figured I was destined, like Siddhartha, for spiritual greatness." Prince Siddhartha became the Buddha. Jaimal became a writer for San Francisco Magazine. From a Zen perspective, pretty much the same thing.

Yogis' lighthearted yet serious-minded memoir is called "Saltwater Buddha: A Surfer's Quest To Find Zen On the Sea" ($15.95 in paperback from Wisdom Publications). In self-deprecating fashion the author (who lived for a time in Yuba City with his father and his stepmom) comes to understand that the quest for the perfect, blissful surfing experience serves only to stoke the illusion of an independent self. "Just as a wave cannot exist apart from water, what we mistake as 'our' minds are dependent on the one true mind, the Buddha mind."

Yogis quotes surfing hero Barton Lynch observing that surfers are "more cocky and judgmental than any group of people in the world." The Santa Cruz surf Nazis are maybe the worst, yet Yogis comes to realize that even surf Nazis "have Buddha-nature." Himself included.

Life is like catching a breaker. "The take-off is arguably the most scary and difficult part of riding a wave. Too far forward or back can be the difference between a smooth glide down the face or being pitched--what surfers call 'going over the falls.' . . . the surfer, like the Zen student, must constantly find the middle way."

Yogis' water color portrait of a young man who accepts "who I am," that he is not "the things I do" (though they, too, are), uses language that is by turns funny, reflective and salty. That was Zen. This is now. 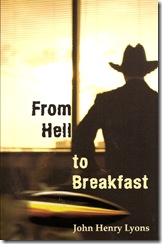 The American Civil War is over. In Texas, changes are coming even to the communities spared the smell of battle. Strangers are passing through: "Poor folks fleeing the destruction, avaricious Northerners and men with criminal intent, adventurers, and returnees hoping to find something of the homes they'd left." The little town of Three Corners, near the Big Thicket area in the southeast, is one such place. Elias Trace has come to settle here. He is "in his early twenties, of average height and somewhat lean" and, as Crabby Janes, his friend and unofficial town mayor, says, Trace is formerly "of Mosby's Raiders, late of the Confederate States of America."

Not far from Three Corners a group of emigrants has been massacred by a "gang of deserters, Mexicans, and renegade Indians" led by Gilbert Clayton. Farm wagons were burnt, bodies scattered. "Men's trouser pockets had been pulled out; women's fingers bent awkwardly or were cut off for the rings." Some of the bodies were desecrated; some of the women were missing. A burial detail from town finds devastation, and they return with guns ready. "All who lived on the frontier were familiar with death as a part of life, but the details of what lay buried behind them would have unnerved even the most hardened of men."

That's the setup of "From Hell to Breakfast" ($12.95 in paperback from iUniverse.com) by Chico area writer John Henry Lyons.

Lyons introduces quite a cast of characters, including a love interest in the young widow Emma Mann. The story is one of courage, but also of leadership. Trace's plan to surprise Clayton's gang draws on skills honed with Mosby, and though Trace had wanted to put battle aside it had come to him. Trace wavers, but Crabby puts it bluntly: "It's leadership here that makes for victory, that and some luck and dirty tricks."

Trace remembers what a compatriot had told him: "Men that believed in a leader . . . would follow such a man if only to reach down inside their souls and see if they really had the courage to match what they had come to expect of themselves."

It's a crackling good yarn, a page-turner leading inexorably to the final confrontation in scenes of intense, cinematic violence. 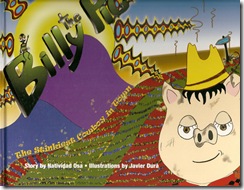 Interrupted by tragedy: A Chicoan's history 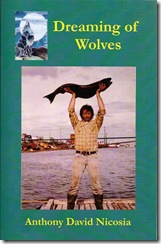 Tony Nicosia is a familiar presence in Chico. He describes himself as a "community activist." "I still give good massages," he says, "and get rid of headaches and sore hands, feet, and backs. I have also worked for the American Red Cross at the Neighborhood Church, and I helped the people who evacuated from the Paradise and Concow fires. I gave them food and water and helped out feeding and watering their animals. This year I helped again with Bidwell Park cleanup and I worked on the projects around Horseshoe Lake and Chico Creek." He is also involved with various environmental groups as well as the Chico Peace and Justice Center, which helped him get his life story into print.

"Dreaming of Wolves" ($15 in paperback from Tony Wolf Productions) by Anthony David Nicosia is available at Lyon Books in Chico as well as the Chico Peace and Justice Center, where newsletter editor Steve Tchudi helped shape the manuscript. The short chapters are reminiscences of a life studded by misfortune. "I was married two times," Nicosia says, "and both turned out tragically. The first was my wife, Cathy, and my two children" who were all killed in an automobile accident. "Then there was Christy, who died of cancer. I was a good husband and a loving dad, and I think of those two women a lot."

Nicosia himself "had two motor vehicle accidents in the past ten years, and I still have memory problems. There are many wonderful men and women who are my friends. I appreciate all the people who knew of my head injury and memory loss and were very understanding as to why I have had a hard time remembering them." He faced a difficult childhood in Pennsylvania. His parents divorced and he came down with rheumatic fever. In the hospital he developed an interest in wildlife, especially wolves. "They really take care of family--if a mother wolf dies, other members of the pack will take over the cubs."

He served in Vietnam, returning home to hostility and discrimination. In the mid-1970s he wound up at Chico State University. He faced cancer, brought on, he says, by exposure to Agent Orange.

Yet Nicosia survives--and guess what? "I am still dreaming of wolves." 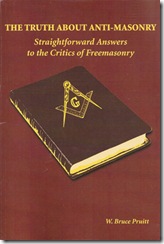 Roseville writer W. Bruce Pruitt is convinced that criticisms of Freemasonry are demonstrably false. In "The Truth About Anti-Masonry: Straightforward Answers to the Critics of Freemasonry" ($9 in paperback from Dorrance Publishing) Pruitt defends Masonry against charges that it causes family conflicts, that Masons in business show favoritism to other Masons, that it's secret, cultic, a religion, and that its punishments are severe. He concludes that Freemasonry is "religious" but not a religion, and that it is perfectly compatible with the author's own Christian faith. Its symbols of a square and a compass are reminders of a solid moral foundation.

Former California State Park Ranger David Carle provides a valuable "Introduction to Water in California" ($18.95 in paperback from University of California Press), one of a series of "California Natural History Guides." Published in 2009, the second edition takes note of California's drought and claims that "the greatest opportunities for expanding water supply in the coming years will be through conservation, recycling, and groundwater management, rather than the old 'concrete path' of the past, when dams and aqueduct construction were the first choices." Carle also reminds readers that "water flows uphill toward money." A colorful overview of nature and politics. 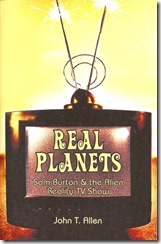 When Mount Shasta begins to smoke, folks take notice. Also taking notice are three space aliens, Stanley Cooper, Mickey Circle and Cynthia Clark, sent to earth to scare and astound the populace in order to jazz up sagging ratings for a reality show back home. The smoke turns out to be a hologram, but the shenanigans don't stop there. Drifter Sam Burton finds himself in the thick of things, all chronicled by Red Bluff novelist John T. Allen in "Real Planets: Sam Burton & the Alien Reality TV Show" ($24.95 in paperback from PublishAmerica). It's a salty tale for "adults."