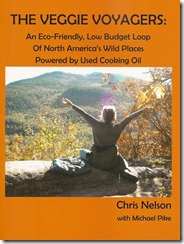 In July 2007 Chris Nelson and her spouse Michael Pike celebrated retirement from nursing careers by setting off on a nine-month journey. Their transportation of choice: "An '87 Ford F-250 four-wheel drive 3/4-ton pickup with a 8' cab-over camper," a "multi-fuel vehicle able to run on diesel fuel, bio-diesel, or straight vegetable oil." They called it the Veggie Voyager.

Nelson kept a blog along the way (http://veggievoyagers.blogspot.com) and now its content, including some stunning landscape photographs, has been published as "The Veggie Voyagers: An Eco-Friendly, Low Budget Loop Of North America's Wild Places Powered By Used Cooking Oil" ($26 in paperback from Are-We-There-Yet Press) by Chris Nelson with Michael Pike.

The couple will be sharing their "adventures in mobile homelessness" tonight at 7:00 p.m. at Lyon Books in Chico.

"This is a book about retiring on $40 a day," Nelson writes. "It's a book about loss of habitat and environmental threats. Most of all, it's a book about the beauty of the natural world." The couple sometimes bought vegetable oil from Costco, but often along the way obtained the used variety from fast-food chains. Any water had to be removed from the oil. The filtration process involved a modified juicer and a contraption that looked more like a still or meth lab. It took hours, and more than once local law enforcement asked them to move along.

Nelson and Pike (along with Sasha, the dog, who learned repeated lessons about porcupines) traversed some twenty states and three Canadian provinces. "I figured out we'd stayed 16 times at Walmarts and 67 days with friends, family or under the wing of New Orleans folks. We've stayed at gravel pits, casinos, . . . hot springs, dumps, roadside turnouts, BLM land, campgrounds and four motels."

During their trip they participated in a rally in New Orleans on behalf of public housing, made tense with abundant police presence. In Utah they visited the town of Monticello where the "uranium and vanadium processing plant" "had created a legacy of cancers." They walked among the Bristlecone Pines on the Eastern Sierra and took a "walking meditation. The trees had one voice. It was a low, slow, deep, muted sap hum."

And they showered every four days, needed or not. 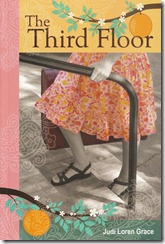 In 1962, the Salvation Army's Booth Memorial Home in inner-city Oakland existed to "house, hide and feed" pregnant teens and unwed mothers. Fifteen-year-old Judi G. found herself there that summer. "I'm horrified my friends will find out where I am and why. Being in trouble doesn't mean the simple words, she's pregnant. It means I had sex, and that is the worst part of the truth, the dirty truth. I feel dirty; I am dirty."
Young Judi's thoughts are captured with poignant clarity by Chico author Judi Loren Grace. "The Third Floor" ($14.99 in paperback from Jetstream Publishing) is her own story, pieced together from letters she sent her lifelong friend, Joanie, that summer of '62. Written in the voice of her fifteen-year-old self, the story traces Judi's growing up years in Porterville and the aftermath of delivering a child. "I have a son. . . . I'm tired and happy and scared. I was in labor for sixty-five hours."
Lyon Books in Chico will hold a book signing and talk by the author on Monday, February 28 at 7:00 p.m.
The book reads like a novel, yet there are historical photographs throughout, an epilogue explaining what happened to those involved, and a selection of Judi's letters to Joanie ("For the past two nights about 12 girls have met in the parlor and we dance. I've learned to do the Continental walk, Texas Hop, Watusi and the Bristol Stomp" . . . "Don't get the idea that I'm having one big blast cause honey I'm not.").
Then there's the agonizing moment of giving up the child. "The new mother stands to get the baby. . . . I stand in the middle of our living room in full sight, kiss him on the top of his head, smell his scent, rub my cheek on his cheek as he sleeps, unaware he is changing mothers; then I look at his face for the last time."
But it isn't the last time. "Secret stuff has a way of oozing out," as therapist Silona Reyman says in the book's resource page. "Sometimes secrets explode. Secret keepers in the world of adoption play a dangerous and heartless game."
Co-owner, with daughter Dana, of Satori Color and Hair Design, Judi Loren Grace has penned a courageous narrative and reclaimed a life.

[Clarification: Author Silona Reyman has clarified that she is the writer of the quotes: “Secret stuff has a way of oozing out. Sometimes secrets explode. Secret keepers in the world of adoption play a dangerous and heartless game.” They are from her book, “Musings of a Ghost Mother.” The text of the original review has been updated.]
Posted by Dan Barnett at 9:00 PM 1 comment:

Creative writing for kids from a Chico State University grad 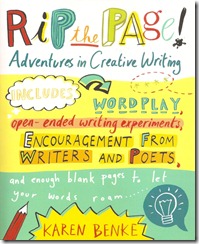 "Wool around with fords," writes Karen Benke, spooneristically. "Rake tisks!" Her new book does just that. It's called "Rip the Page: Adventures in Creative Writing" ($14.95 in paperback from Trumpeter, an imprint of Shambhala Publications). As the cover proclaims, "Rip" "includes word play, open-ended writing experiments, encouragement from writers and poets, and enough blank pages to let your words roam."

With a degree in creative writing from Chico State University and an M.A. in Writing from the University of San Francisco, Benke conducts workshops with California Poets in the Schools. Based in the Bay Area, she visited Lyon Books last year to help empower young writers. As she says in her introduction, "Let the tip of you pen scrawl, scribble, leap, doodle, and rip, rip, rip! That's what creative writers do when they aren't busy staring, day-dreaming, and eavesdropping."

Here are dozens and dozens of writing exercises brilliantly disguised as word games. There are word lists (such as sound words like "buuuuurrpp!" and "eeek!"); "try this" experiments (writing a poem about a real-life hero. Let's see: What rhymes with "Rodgers"?); "definition decoders" (connecting inner and outer worlds by describing "what color a star sounds like" or "what does a new idea feel like?"); "suddenly a story" (writing about something HUGE, like a disappointment, and writing about scars, inner and outer: "Tip the word S-C-A-R on its side and see what oozes out. Put your initials on it, date it, tape it above your desk. Look in the mirror and congratulate yourself. Smile at that brave warrior gazing back at you").

Scattered throughout are words from writers to young writers. There's "a note from" Lemony Snicket: "You must spend time eavesdropping on the world, writing down things you see and hear while no one is paying attention to you. This is best done with a notebook, and the first thing you should write down in your notebook is an excuse, so if you are ever caught eavesdropping you will have a good reason. . . ."

Betsy Franco likes "to act like a mad chemist and put things together that don't normally mix, such as math and poetry." ("puddles - rescued worms = cloudy mirrors")

My try: We oldsters support Aaron. Codgers for Rodgers!

An adventure in the Arctic from a Chico novelist 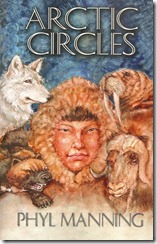 Phyl Manning spends her time in Chico and New Hampshire, but in her imagination she lives among the Inuit, specifically those in the high Arctic reaches, the Inupiat. Her new novel (a sequel to "Kiti On Ice") is "Arctic Circles" ($15.99 in paperback from Raven's Wing Books). In this story Kiti is now grandmother to fourteen-year-old Nik (pronounced "neek") and his older brother, Sitok. Artistic Nik is not much of a hunter, but a series of events forces him to confront some of the fiercest animals in the wilderness and brings him face-to-face with the "dog people."

The author will be signing copies of her books tonight at 7:00 p.m. at Lyon Books in Chico.

The "dog people" are the kalunait, those with "heavy eyebrows," Westerners from the south. An anthropologist, Clifford Belson, travels to Nik's village and brings his twelve-year-old daughter, Bonnie ("PAH-nee" to the villagers).

Because of her outfit Nik thinks she is another male, someone wanting to study the ways of the Inupiat, and together with Sitok the three share some breathless adventures. "Nik's hunting improved because he himself now had someone to teach. On rare days, Sitok took both of them out with him--for fish, for seal." And then comes the encounter with Nanuk, the great bear. Sitok nearly loses his life; Nik finds unexpected courage; Bonnie saves the sled-dog Nuko.

It is 1935. Far away to the south great nations are struggling with economic depression and rumors of Nazi aggression. "And 1935 will be the last generation for Arctic Inupiat to live within their five-thousand-year-old tradition, for civilized people and now whole governments to the south are encroaching, are determined to emend these primitive folk who have for so long lived in health and harmony with their land and with each other." Some Inupiat have journeyed south to villages so vast they actually have a name; among them is Nik's father.

But now Nik's parents have disappeared in a flood and he is determined to find them. Nik's growing maturity and resourcefulness form the centerpiece of the novel and make for a gripping tale suitable for young adults.

Never settled, Nik and his kin always prepare food caches for the next journey. "Inupiat travel--that's what they do."