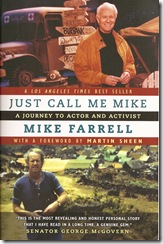 From a bit part in The Graduate, to eight years on M*A*S*H as B.J. Hunnicutt, five seasons of Providence, and a part in Desperate Housewives, shy Mike Farrell has realized a childhood dream of becoming an actor. As a kid growing in West Hollywood he delivered groceries to the likes of Groucho Marx, Jimmy Stewart, and Lucille Ball, but these days "the beef" is in his outspoken activism.

It's all detailed in the new paperback edition of "Just Call Me Mike: A Journey To Actor and Activist" ($16.95 from Akashic Books).

Farrell will be appearing in Chico for a book signing and free-wheeling question session this Saturday at 7:00 p.m. at the Trinity United Methodist Church, 285 East 5th St. Tickets for the free event are available from the co-sponsors, Chico Peace and Justice Center and Lyon Books.

Both George McGovern and Bill O'Reilly have praised Farrell for his honesty, and the book highlights Farrell's decades-long involvement with what he calls "people issues" ( including "equal rights for women and minorities, . . . the right of the disadvantaged to a social safety net, . . . and an end to the death penalty").

But Farrell writes that he is not a pacifist: "I believe in the right of self-defense, be it personal or national, but I also believe in finding peaceful resolutions to disputes and oppose war except in the face of the most dire national threat." One time, introduced to Nicaraguan Sandinista officials extolling the virtue of the socialist revolution, Farrell was sickened by the "triumphalism" and evasion when he ventured questions about how "people's lives were being improved." In effect he asked "where's the beef?" and found only the stuff one finds in a barnyard.

Married since 1984 to actress Shelly Fabares, Farrell believes 9/11 should have been treated as "a grotesque and inexcusable crime" rather than an act of war; "America's emotional tension found an outlet in the war in Afghanistan. And it played into the hands of media manipulators who transformed George W. Bush from an inept bungler to a war president."

Farrell's Hollywood stories are frequently funny, but the author never loses sight of his bottom line: "Everyone deserves what everyone wants--love, attention, and respect."

Posted by Dan Barnett at 7:28 PM No comments: 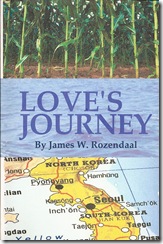 Posted by Dan Barnett at 7:24 PM No comments: 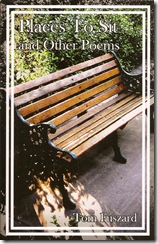 An author's note says Chico poet Tom Fuszard is also "a corporate communications consultant, speechwriter, lecturer and speakers' coach," and his background shows in the clarity and directness of his work.

"Places To Sit and Other Poems" ($9.95 in paperback from Felicidad Press out of Chico) is a collection of remembrances. In "Regrets" the poet writes: "Not wise to dwell on the past, / they tell me, / but now I have the time." The time is spent thinking about "What I Learned When I Started to Listen": "That wars are fought / mostly by people / who had nothing to do / with starting them // That a lot of people / are afraid all the time // That much of the world / is in a mess / and a lot of it is because / nobody listens."

These simple words give the reader pause, especially on a day of national remembrance.

The opening poem, "Places To Sit," has something to say about a park bench, a barstool, a witness chair, and more. Including deep grass: "For people in love, mostly. / People who want to be / away from the crowd. / See, he's brought a little book of poems. / He will read some, and they will see / the depths of each other's eyes / for the first time."

Posted by Dan Barnett at 7:23 PM No comments:

Advocate of Hindu Vedanta to sign books in Chico 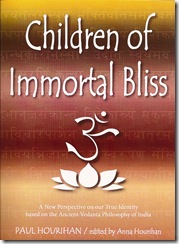 Anna Hourihan, publisher of Redding-based Vedantic Shores Press (www.VedanticShoresPress.com), has edited a series of lectures on the Hindu philosophical school of Vedanta which serve as a good introduction to the teachings of Hindu mysticism. Delivered by her late husband at the University of Guelph, School of Continuing Studies, in Ontario, Canada, the lectures are presented in "Children of Immortal Bliss: A New Perspective on Our True Identity Based on the Ancient Vedanta Philosophy of India" ($16.50 in paperback), by Paul Hourihan.

Anna Hourihan will be speaking and signing copies at Lyon Books in Chico, Wednesday, September 10 at 7:00 p.m.

The book begins with the claims of Vedanta, that "nothing exists except the Divine Being, or Brahman. . . . Truth is One; sages call it by different names. . . . The very nature of the Soul is divine: the Cosmic Self manifests as the individual Self or Atman. . . . The primary goal in life is to realize, through direct personal experience, the divine nature within our own self."

For the author, the ancient Hindu teachings of the Upanishads and the Bhagavad Gita are "the most sophisticated of all religious writings" and "represent the seedbed of everything that is deep, universal and mystical in the world." Thus the mystical traditions of Islam (the Sufis), Christianity (especially Meister Eckhart), Buddhism (Zen), and Taoism are all "confirmations" of Vedanta teachings.

Though Vedanta accepts "all religions as valid," what Hourihan means is "not the truth in them but the truth in us"; that is, a religion is inspired to the extent that it helps convince the person that his or her Self is identical to Brahman. The path to such realization, the author says, is through meditation, the experience through which even ordinary persons gain "the awakening of our true self."

The ego-power of individuality, including a fascination with "occult techniques," must be eliminated; "we are not sinners seeking somehow to be saved but rather we are an unknown purity seeking to merge with the Unknown Purity."

Buddhists, Christians and Muslims may well be uneasy at Hourihan's reinterpretation of their doctrines, but read with discernment the book is a clear exposition of the claim that "The Self is all, and you are the Self."

Posted by Dan Barnett at 7:21 PM No comments: