"An Incredible Journey: From A Barcelona Eighth Grade Dropout To An American University Presidency" 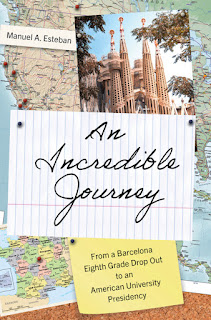 In 1993, Chico Enterprise-Record reporter Larry Mitchell, in his profile of one of the candidates to succeed Robin Wilson for the Chico State presidency, wrote: "No one in Manuel Esteban's high school graduating class ever predicted he'd be in the running to become a university president. That's because Esteban had no graduating class. He never attended high school."

"Who could have imagined?" writes Emeritus Professor of Sociology Walt Schafer in his foreword to Esteban's newly published autobiography. They became close friends during Esteban's decade-long presidency.

Later, Esteban and wife Gloria moved from Chico to Santa Barbara and eventually to Academy Village in Tucson, where he completed his memoir.

"An Incredible Journey: From A Barcelona Eighth Grade Dropout To An American University Presidency" ($14.50 in paperback, self-published; also for Amazon Kindle) is a chronological account mostly focused on Esteban's academic development, guided especially by his younger brother, Julio, who tutored him for the high school equivalency exams.

He rose in academic accomplishments, living in France, Canada, and the U.S., becoming a tenured professor and then an administrator.

The last half of the book is devoted to Esteban's Chico State presidency and his efforts to move away from the party school image, instituting a speaker series featuring seven Nobel Prize winners and reaching out to the community to restore town-gown relations. At first Esteban the new president was the toast of Chico, but "then I made a very stupid mistake" complaining about being the lowest paid CSU President.

That set off a firestorm of criticism, especially in the Chico Enterprise-Record. History Professor Joe Conlin became his bête noir, and Esteban's account reveals his own thinking in response to what one reporter called Conlin's "witty excesses."

Yet as the years passed even partisan media grew in respect for Esteban's efforts. In "lessons learned," he writes that "even if you are convinced that yours is the right action to take, you are never certain that those you are expected to lead will follow you." So, he writes, "take time to listen, learn, consult, and build alliances."

Wise words from a kid uninterested in school. Who could have imagined?

"There There: A Novel" 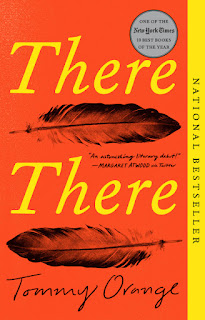 Native Americans came to the city, novelist Tommy Orange writes, "to start over, to make money, or for a new experience. Some of us came to cities to escape the reservation." They became Urban Indians.

In his teens Orange wanted to tell their story--and now he has. An enrolled member of the Cheyenne and Arapaho Tribes of Oklahoma, he was born and raised in Oakland and that's the locale of "There There: A Novel" ($16 in paperback from Vintage; also for Amazon Kindle).

At first the title sounds soothing, offering comfort. But the words are those of Gertrude Stein, who grew up in Oakland but found later so much change had taken place there was no longer any "there there."

For one of Orange's characters, also born and raised in Oakland, the quote embodies reality; "for Native people in this country, all over the Americas, it's been developed over, buried ancestral land, glass and concrete and wire and steel, unreturnable covered memory. There is no there there."

"There There" is the Book In Common for 2021-2022, adopted by Butte College (butte.edu/bic), Chico State (csuchico.edu/bic), Butte County libraries, the City of Chico, and other organizations.

Before tracing the intertwining lives of a dozen main characters, all headed to the grand powwow at the Oakland Coliseum--and a violent ending, Orange in his Prologue details not only historical massacres of Native peoples, but how their faces have been appropriated.

"Our heads are on flags, jerseys, and coins. Our heads were on the penny first, of course, the Indian cent, and then on the buffalo nickel, both before we could even vote as a people--which, like the truth of what happened in history all over the world, and like all that spilled blood from slaughter, are now out of circulation."

What does happen is heartbreaking; yet, inescapably, the Urban Indian is no longer faceless.

"Christ's Emperor: A Novel Of Theodosius The Great And The Triumph Of Christianity" 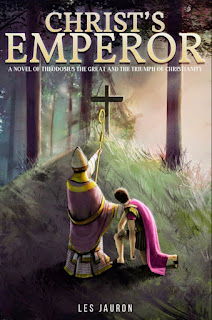 Retired Butte College administrator Les Jauron reaches back in history for his debut novel about the last Roman emperor to rule the entire Empire.

"Christ's Emperor: A Novel Of Theodosius The Great And The Triumph Of Christianity" (self-published for Amazon Kindle), focuses on Theodosius' rule from 379-395 AD, especially his military planning and exploits and his attempt to bring Trinitarian (Nicene) Christianity to the Eastern Empire (which received plenty of pushback from Arian Christians and pagan Senators).

Jauron, a West Point grad and retired military officer, writes in a notes section that "one of my primary motivations with this novel was to understand why Theodosius made the decisions he did." Sometimes he has to make alliance with the invading Goths to ward off other invaders; at other times he fights his cousin when he attempts to usurp the throne.

Most notable is Theodosius' relationship with Bishop Ambrose, whose authority over the Nicene Christians presents a formidable hurdle to any rapprochement with Arians (who believed there was a time "when the Father existed and the Son did not") and pagans. If Emperor Constantine had made Christianity legal in the Empire, Theodosius' hand is forced to make all other religions effectively illegal in the Empire.

Though throughout the novel a good number of severed heads of enemies and betrayers are delivered to Theodosius and others, Jauron is more interested in battle strategies; the letters that fly as fast as horses between various co-emperors; and in the excruciating decisions Theodosius must make to preserve his family dynasty and ensure Ambrose's favor.

Timasius, one of Theodosius' trusted commanders, confronts the Emperor after he defers to Ambrose in not punishing those who destroyed a synagogue. Theodosius replies: "To accomplish my objective to make Christianity the unifying force in the Empire, I need Ambrose and I don't need the Jews. So, the Jews get screwed, I look weak, and Ambrose looks like a hero. It genuinely sucks.... our world is not fair, it is not just, it just is. I have to accept this to be an effective ruler."

Much to ponder in this long novel about ends and means.

"The Wildflowers Of Bidwell Park" 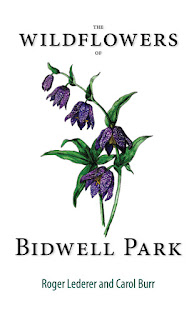 Renowned science educators Roger Lederer and artist-wife Carol Burr have the dirt on Bidwell Park. Or, more to the point, what grows out of that dirt. Their new collaboration is called "The Wildflowers Of Bidwell Park" ($24.95 in paperback from Stansbury Publishing, available locally from Magna Carta, Mangrove Gift and Garden, ABC Books, the Bookstore downtown, Bird in Hand, and Made in Chico).

Earlier volumes include "The Birds Of Bidwell Park" and "The Trees Of Bidwell Park," but this project was a long time in coming. After consulting with local botanists, Lederer and Burr narrowed the list of some 800 flowering plants in the park down to 112 to illustrate, though more than twice that number are given a nod or a description.

Defining "wildflowers" as "typically short, showy, herbaceous and mainly annual plants" (including those accidentally or intentionally introduced), the book presents on each page a colorful illustration, name, origin, size, where in the park the plant can be found, and some interesting observations and history. Organized by color, this is not a comprehensive field guide but rather a revel in the beautiful and bodacious flowering park.

It's clear that picking the flowers is prohibited by California law, so the health benefits often described (along with the sometimes poisonous effects) are not intended as a dinner menu. In fact, at least with one common weed in the park, "Handle the plant and you will never forget Milk Thistle." Though, the book ads, "its seeds have been used as a coffee substitute and are sold in health food stores" and the plant is the emblem of the Encyclopaedia Britannica.

Now the Perennial Sweet Pea: There are "4 species of pea in the park," often seen near Big Chico Creek. The Common Soap Plant "was used by indigenous Americans after being pounded and mixed with water, its soapy mixture used as a stupefying agent and placed into streams to stun and catch fish...." The seeds of the Shepherd's Purse "when placed in water, supposedly act as a sort of fly-paper for mosquitoes, reputedly attracting and trapping them."

The book will attract readers to marvel afresh at even the tiniest inhabitants of Bidwell Park.