"Chicken Soup For The Soul: Laughter Is The Best Medicine" 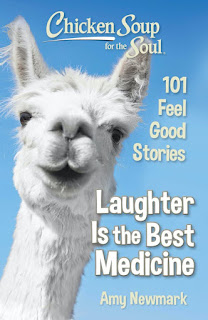 There are hundreds of "Chicken Soup For The Soul" titles in print. The goal of the series, under the editorship of Amy Newmark, is to bring readers "inspirational and aspirational true stories curated from ordinary people who have had extraordinary experiences."

"Chicken Soup For The Soul: Laughter Is The Best Medicine" ($14.95 in paperback from Chicken Soup For The Soul; also for Amazon Kindle) presents 101 vignettes from real people, including Chicoan Gwen Sheldon Willadsen. She's "a retired professor. Her retirement hobbies include spending time with her grandkids, genealogy research, travel, and writing memoir and genealogy stories."

Her short piece, entitled "Eddie," fits into the "mistaken identity" category. It all begins simply enough: "'Welcome to the neighborhood,' said Kelsey and Jim, our neighbors who lived across the street from our new house. As we chatted, Eddie, their short, portly, wrinkled bulldog, sauntered over for an introduction and to check us out. He was slow-moving and mellow but curious. Eddie hung out nearby while we got to know Kelsey and Jim."

A few weeks later her husband Paul walks across the street to visit Jim; turns out they both love cycling. But Paul can't quite remember Jim's name. He hears Kelsey outside yell "Eddie!" (who was eating the flowers) and figures that is the man's name. And that's the name he uses. Jim never corrects Paul; when Paul returns home to talk about the conversation, Willadsen explains who the real Eddie is. Embarrassment? Sure. But it turns to laughter and a long-term friendship.

Joan Dubay's two-year-old grandson describes Jesus as an orange square. Where's Jesus? Up there in the cupboard, pointing to the Cheez-Its....

Viji K. Chary's five-year-old daughter takes to saying "one sec" every time she is asked to do a chore. Frustrated, Chary yells out "No more secs!" Just then her husband walks in....

Robin K. Melvin, exhausted, reaches for the tube of toothpaste and brushes her teeth with Preparation H.

These stories will provide soothing relief just where it's needed. 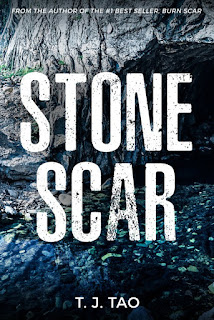 T. J. Tao is the pen name of Michael J. Orr (wordsmithmojo.com). Now based in southern Idaho, he and his family survived the Camp Fire. In "Burn Scar," he transplants what happened in Paradise to a town called Genna (Maltese, he says, for "Paradise"); the novelist's blaze starts in Bear County near Bonneville Road and so is dubbed the Bonn Fire.

One of the characters in that book, James Aloysius Augustine, is a man with a checkered past starting over in Genna, a man who discovers the plot by one Gavin David to use corrupt town officials to drill for gold after the fire. David escapes and James is left to figure out a life purpose.

Not to worry. His story continues in "Stone Scar" ($16.99 in paperback from WordsmithMojo Publishing; also for Amazon Kindle) but the novel itself begins in 1805 with Meriwether Lewis and William Clark in the midst of their famous expedition. They are in what is now central Idaho, meeting with Shoshone Chief Cameahwait, brother of Sacagawea. Though these facts are part of the historical record, what Lewis and Clark find next is most certainly not.

Days later, their Shoshone guide, Toby, directs the explorers to what Toby calls "the river of no return." Will, on a side mission from Thomas Jefferson himself to find the rumored "Lost City of Gold," clambers over rocks for a look, but they give way and he tumbles into the river. Then he "saw it for the first time; a scar burrowed into the stone face of a giant wall leaving an opening the width of the river and nearly level with the surface. A stony beast swallowing the river."

Will and Meri find the river leads into a fantastical chamber, bathed in a golden glow, sporting strange machinery, a portal to a most unfortunate encounter with Gavin David's tyrannical ancestor.

Alternating chapters take the reader to 2019, when James and Boise State University archaeologist Stuart Angeline discover the same chamber, activate its mechanism, and eventually find their purpose in life beyond what they could have imagined. Dan Brown fans, especially, will enjoy the page-turning romp and be impatient for the next in the series. 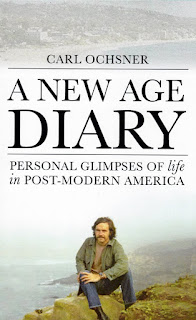 "If you remember the Sixties," the old saw goes, "you weren't there." But Chicoan Carl Ochsner was there, and he remembers.

As a kid, he and his family move from a little Wisconsin town to Southern California. In 1969, now twenty-one, Ochsner attends "Altamont," the Woodstock wannabe east of San Francisco. The headline band is the Rolling Stones, and a lot of people at Altamont get stoned. Disorder prevails. Psychedelics flow. Fights break out. Four die.

Ochsner recalls those times in "A New Age Diary: Personal Glimpses Of Life In Post-Modern America" (paperback, self-published; available from the author at ochsnercr@att.net for $17 including postage). ABC Books in Chico, open limited hours, also has copies.

No stranger to the L.A. County Jail (where he spent a couple of weeks at age 19), no stranger to booze and reefers and garage bands ("The Rolling Diablos," anyone?) and "beach culture" ("cut-off jeans, bare feet at all times, deep tan, unkempt hair"), the author in his mid-twenties begins to feel that "something here was not quite right."

"I bring forth these drug-infused reveries not to glorify my past (well, maybe just a little bit) but to help provide a realistic, thorough and nuanced view of the challenges we face today." He'd like to see pot pushed back "to the margins."

In 1969 he wanted to stick it to the Establishment, with its law-and-order crushing freedom-and-creativity; by 1990, he writes, "I fully understood that Law, Order, Peace, Freedom, and Creativity all sat together at one end of the spectrum, while Anarchy, Injustice, and Violence sat at the other."

A letter he sends to a secular humanist group whose meeting he attends in Wisconsin makes it clear that while Ochsner considers himself to be among the "free thinkers," the "new age" philosophy which sought to overturn fusty old Victorianism is fraught indeed.

While no friend of the socio-political right, he worries that "in the process of moving fearlessly into the new age, we have shoved aside some worthwhile concepts (such as shared morality and self-restraint, for example) that are indispensable to a civilized society."

Ochsner lived through the Sixties. And he remembers.

"All That Glisters Is Not Gold" 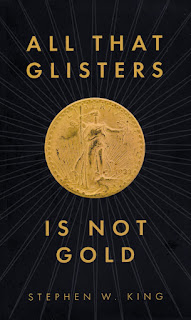 Stephen King's new novel is a numismatist's delight, to coin a phrase, but it's not from that Stephen King; it's from ourStephen King, "a thirty-three year resident of Chico and a retired dean from CSU, Chico."

What's true: In 1907 the U.S. Mint began producing a stunning gold coin, designed by famed sculptor Augustus Saint-Gaudens. Versions were distributed through 1933 (almost a half million were produced in that year). The "double eagle," showing lady Liberty on one side, could be had for $20.

But then, early in 1933, in the midst of the Depression, everything changed. In order to stop the bank crisis by taking the country off the gold standard, FDR issued an Executive Order requiring those who held gold to return it to the banks. Most of the 1933 double eagles found their way back home, but some did not. Their value rose to astronomical heights, yet possessing a 1933 double eagle became a federal crime and remains so today.

Enter the novelist. "All That Glisters Is Not Gold" ($18.99 in paperback from FriesenPress, friesenpress.com; also for Amazon Kindle), by Stephen W. King, takes the reader to modern-day San Francisco and Lucas Bitterman, an accounting major and aspiring lawyer. At the death of his kindly grandfather, coin collector extraordinaire, Luke finds he has inherited a 1933 Saint-Gaudens Double Eagle.

"The coin needs legal help," Gramps had written to Luke, quoting the Shakespearean original "all that glisters" from The Merchant of Venice. Luke's coin is worth millions, coveted by international collectors and street thugs alike. And when word leaks out, Luke and his family are no longer safe.

Along the way the reader is plunged into the legal intricacies of "asset seizure" and the work of the Secret Service (it's not just to protect the President). King brings the Bitterman family to life as they try to figure out what to do with "the most beautiful coin ever minted in the United States or anywhere else." Keep it? Sell it? Donate it? How?

The ingenious resolution makes for a fun and satisfying read--unless you actually have a 1933 Double Eagle, which, dear collector, puts the "bitter" in Bitterman. 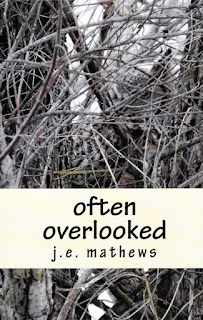 In order to move outward, the poet says, we must first move inward: "Uncovering forgotten places inside, I start to complete/ A picture of myself--whole--and I am not so alone/ The parts of me add up to so much more/ Than the sum others think of as my worth/ With this understanding I can return to my work/ I can give of myself without getting broken...."

Birdwatcher, Orland middle school science teacher, artist: Chicoan J.E. Mathews combines her scientist's eye for observation with her artist's heart for feeling in poems about moments, and voices, that are "Often Overlooked" ($12.95 in paperback; self-published).

Mathews' poetry is about noticing, "from finding a dead duck on a hiking path," she says in an interview, "or seeing a brown paper bag in the creek to the excruciating feelings of joy and grief I experienced watching my friend living with cancer."

Many of the poems observe prosaic things until a metaphorical "twist" at the end. "Canning," for instance, starts with ripe plums and then their preparation. "Rings and lids jangle/ Against boiling glass/ On the back burner/ While plums and pectin/ and sugar simmer/ up front," the poet writes.

Later, in winter, comes time to savor the results. Delicious at first, but then: "By the seventeenth pint jar/ plums sicken her/ A winter drought/ Another season without/ The living/ Fresh fruit/ Leaves the picker/ Yearning/ For something more/ Than canned blessings/ She cannot swallow/ One more mouthful/ Of this past sweetness."

A present sweetness comes when the poet sees the "Sandhill Crane," an experience Mathews draws on from the Llano Seco area: "a hidden beauty suddenly seen/ she soars exquisitely/ above cypress spires/ she points/ and splits the wind."

In "Being," the poet is grieving, "sitting with memories/ of her laugh and her smile...// bent beneath the burden/ of longing/ awaiting the return of/ the Sandhill Crane/ yearning to hear his call/ see his dance/ even if only in dreams// ... as the tide begins to recede/ shifting waves change direction/ leaving me on the sand/ amid the fractured wreckage/ of so many broken things."

Things which the poet brings together into something new, not to be overlooked.