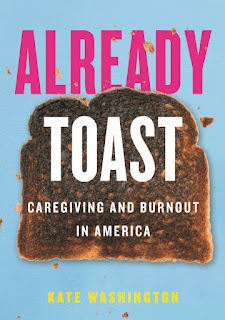 Kate Washington (kawashington.com) is a freelance writer, Sacramento Bee food critic, and a Chico High grad (her dad and brother are still in town), earning a Ph.D. in English from Stanford. She married Brad Buchanan in 1999; they have two daughters and now live in Sacramento because of his teaching job at Sacramento State.

"I sprinted eagerly into marriage," she writes. "I was young, naive, steeped in mainstream white feminism, and I thought equality was there for the plucking." The reality of married life was much more problematic and in 2014 an earthquake came to shake its very foundations. Brad, in his mid-forties, was diagnosed with what was thought to be a manageable, slow-moving lymphoma.

But one ordinary Saturday morning Kate was summoned to the bathroom. Brad was coughing. "Blood was splashing out of his mouth, blooming over the white porcelain of the sink. The splashes coming up out of his throat made little noises, like the gurgle of an unstuck drain. ... Each time he coughed it seemed like half a cup." Kate had to add "caregiver" to her regular duties as mom and partner, and it almost broke her.

The searing, stunningly honest story is told in "Already Toast: Caregiving And Burnout In America" ($24.95 in hardcover from Beacon press; also for Amazon Kindle and in audiobook format). Brad's cancer was aggressive; the only hope was a stem-cell transplant from his brother, but that led to further complications, including near blindness, which almost took his life.

"Fried and frazzled" as a caregiver, Washington endures a kind of "erasure." "As a caregiver, I sometimes felt like I barely existed as an individual."

"Burnout," she adds, "kills empathy and makes worse caregivers of all of us who suffer from it. More than that, it made me a worse person: less kind, less patient, less fun to be around."

Washington recognizes her own privilege is not typical and proposes the creation of "networks of care" (recommending aarp.org/caregiving), though she admits there's no single answer. But, she says at the end, "If society wants us to keep caring for others, it's going to have to show a little more care for us." 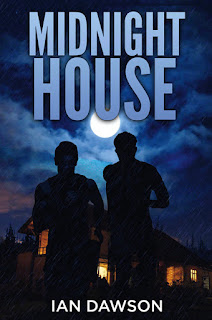 In 1993, seventh-grader and Redding native Ian Dawson was abducted in what is now the community's Clover Creek Preserve. Held for a time by two older boys, he escaped major injuries but, as time passed and the assailants were never identified, he decided to write a fictionalized account. Twenty-five years after the event, Dawson, now living in Los Angeles, published "The Field."

The YA novel centered around Daniel and his best friend Kyle, both fourteen, and two adductors, James and Austin. In self defense Daniel causes Austin's death, James is imprisoned, and the threat is over. The end.

Not exactly. Now, in "Midnight House" ($19.15 in paperback from BookBaby; also for Amazon Kindle, see thefieldya.com) Dawson offers a crackling-good YA sequel that will have readers hooked. Daniel Robinson and Kyle Hanson are now sixteen, attending Redding's Enterprise High School, still besties, though Daniel's trauma-fueled nightmares have made him secretly dependent on sleeping pills and caffeine. Will there ever be closure?

Kyle is the captain of the JV basketball Hornets, too admiring of Luke Darden, the Varsity captain. When Luke invites him and a few other teammates to some "games" at the mysterious Midnight House near Whiskeytown Lake--ostensibly to determine who will be the next Varsity captain--Kyle is all in. Daniel is suspicious, but can't dissuade his friend. Turns out Luke's older brother, Tyler, was best friends with Austin, and now he schemes to see Kyle and Daniel dead. The plot ... sickens.

The first part of the novel is filled with lighthearted banter about sports and girls. Kyle's girlfriend is in London on a study abroad program; Daniel meets Amber, who "was behind the counter at The Beadman, a popular arts and crafts store on Park Marina Drive in Redding...." New in town, she and Daniel hit it off. Both are the same age, both attend EHS. Sparks, anyone?

Then the story becomes darker after Luke and Tyler discover who is responsible for Austin's death. Kyle's obsession with pleasing Luke puts Daniel and Amber in mortal danger.

The extreme hazing at Midnight House gives way to a nightmarish life-and-death showdown at the Sundial Bridge which will test the very meaning of true friendship.