"The Road To Positive Work Cultures" 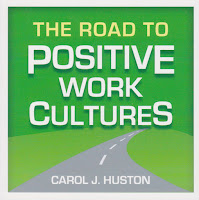 "Nursing," Chicoan Carol Huston writes, "is both physically and emotionally demanding. Hours are long; fatigue related to the physical demands of moving constantly, lifting, and bending is common...." Then there are the sometimes competing "expectations of the employer, patient, family, professional boards, and self." Small wonder that "compassion fatigue" can set in, a weary sadness when the nurse feels unable to help the patient.

Though these words were published a few months before the pandemic, they are multiplied in their significance today. Leaders need to be sensitive to the stresses experienced by health care professionals while at the same time offering a hopeful vision of the future. Huston, management consultant and Emerita Professor at Chico State's School of Nursing, served as Chair of the Enloe Medical Center Board of Trustees and knows the importance of a supportive workplace.
"The Road To Positive Work Cultures" ($24.95 in paperback from Sigma; also for Amazon Kindle) provides ten "leadership lessons" applicable not only to health care but to most any business with employees. Though simple in outline, Huston's examples make it clear that creating a good work culture is far from easy.
Take, for example, the chapter on avoiding micromanaging which, she writes, "is generally an outgrowth of inexperience or insecurity, not a demonstration of competence or expertise on the part of the leader." At the start of hospital shifts, good nurses may check patients, meds, and lab reports in a particular order, which may not be the order preferred by a micromanager and that can make nurses feel they are not trusted.
Far better, says Huston, for leaders to develop macromanagement skills in setting clear expectations but allowing a "divergence in problem-solving."
Each chapter, from establishing mutual respect and civility, maintaining appropriate boundaries, and not letting problems fester, to building effective teams, reducing stress, and showing appreciation, draws on management research to illuminate real-world situations.
The book concludes with chapters on being an "authentic leader," one with "passion" and "purpose." Conflict and change are inevitable even in positive work cultures, but the key is how they are dealt with.
Huston ends her insightful book with Benjamin Franklin: "'When you're finished changing, you're finished.'"
Posted by Dan Barnett at 9:00 PM

"The Movie Adventures Of Eva Jordan" 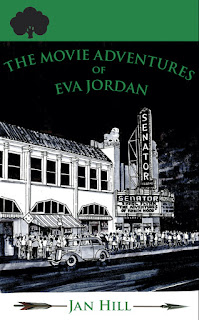 Third-generation Chicoan Jan Hill has written a quietly endearing novel, an account through the eyes of a seventh-grader of six weeks in 1937 when Bidwell Park turned into a sound stage for Robin Hood and his merry men.

Drawing on newspaper reports from the era, the filming schedule and screenplay, and behind-the-scenes footage from the special-edition DVD, Hill beckons young adult readers to the premiere of "The Movie Adventures Of Eva Jordan" ($8.99 in paperback from Stansbury Publishing; also for Amazon Kindle).

According to Ned Walsh, who sits a few desks away in Mr. Owens' seventh-grade classroom, "Robin Hood and the crew" were soon to disembark in Chico and head to "the film location at One Mile."

Eva lives with her parents, Ernest and Susanna Jordan, and three younger sisters (and a fourth home from college). She loves the "The Merry Adventures of Robin Hood" stories but is not allowed to see movies.

Deeply involved in the Salvation Army church Eva's parents and other congregants are part of the "annual Christmas bell-ringing effort to collect money for the town's poor. Members took turns standing in front of Oser's Department Store at Third and Main streets to shake a loud bell...."

Eva is thirteen (going on fourteen) and intensely curious. And she wonders why Mr. Owens is talking about Spain, and those "'fighting their leader, General Franco, and his fascist ideology.'" He adds, "'big-time Hollywood actors, like Errol Flynn, the same fellow who will be here soon to play Robin Hood, have already gone to Spain to see what they could do to help the Loyalists.'"

Then, abruptly, the school board removes Mr. Owens amid charges that he is a communist. In response, Ned and Eva hatch an audacious plot to ask Errol Flynn to intervene and to help raise support for the anti-Franco movement.

Once the Warner Brothers film crew and stars arrive, and Bidwell Park is transformed into medieval Sherwood Forest, Ned and Eva are daily visitors. They end up becoming extras, meeting Flynn himself, and getting the surprise of their lives.

And Chico "officially changed the name of the whole northern section of Ivy Street, renaming it 'Warner Street.'"

"The Titanic And Today's Church: A Tale Of Two Shipwrecks" 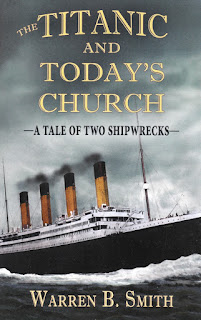 Former Magalia resident Warren B. Smith, who moved with his wife Joy to Fortine, Montana, was deeply enmeshed in the New Age movement until his Christian conversion, which he wrote about in "The Light That Was Dark: From The New Age To Amazing Grace," first published in 1992.

Another, more recent, convert, Doreen Virtue, notes that her parents lived in Magalia and that Smith's book "provided stark comparisons between what Scripture says and what 'A Course In Miracles' says," showing "that 'Course' is the opposite of the Bible!" Her story is told in "Deceived No More: How Jesus Led Me Out Of The New Age And Into His Word," published in 2020 by Thomas Nelson.

Now, in a provocative new book, Smith writes that New Age themes have infiltrated the church. He compares the situation to the most famous "unsinkable" ship: "Many in today's professing church," he says, "are unaware they are also on a sinking ship that is headed for destruction."

"The Titanic And Today's Church: A Tale Of Two Shipwrecks" ($14.95 in paperback from Mountain Stream Press, newagetoamazinggrace.com; also for Amazon Kindle) makes an analogy between the tragic sinking in 1912 of the HMS Titanic and the stance of many "undiscerning" church leaders. Both, he writes, are beset with "design flaws, tragic oversights, false confidence, complacency, pride, greed, denial, disregarded warnings, mixed messages, and unpreparedness."

Each of the dozen chapters begins with a part of Titanic's history, then likens it to the contemporary church. In "A Little Leaven," Smith notes that modern research has found not a giant gash but rather, to quote the New York Times, "a series of six thin openings across the Titanic's starboard hull."

Similarly, he says, a "small teaching--a little (heretical) leaven," the idea of "God within," that God is "in" everything, is spread knowingly or unknowingly by Oprah, Rick Warren, Henri Nouwen, and many others, making shipwreck of Biblical faith. "God is the creator," Smith writes, "and He is distinct and separate from His creation. He is not 'in' everyone and everything." The Gospel lifeboat, he adds, is faith in Jesus Christ.

The book will launch much discussion.

"The Tribe In The Red Brick House" 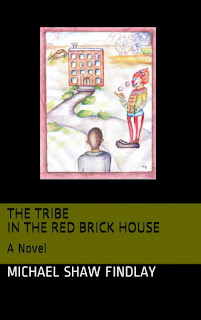 His novel traces the academic career of Peter Shaughnessy, from his hiring at Lannat to his retirement from the Anthropology Department. Findlay draws on his own experiences, and stories he's heard from others--all suitably altered "to protect identities and circumstances"--to observe, with a dollop of sarcasm, his own profession.

Through Peter and his colleagues (not modeled, the author is quick to say, on himself or other real people) Findlay presents institutions of higher education as "merely the new villages occupying a more rapidly changing human encrusted landscape." There are tribes here, too, even in the old red schoolhouse building converted to serve Lannat State.

"The Tribe In The Red Brick House" ($2.99 in Amazon Kindle edition, self-published) by Michael Shaw Findlay is part of a three-book series, "Through An Anthropologist's Looking Glass." (I volunteered to format the manuscript and upload it to Amazon.) The story begins with a long, brutally honest speech, an assessment of the anthropological enterprise in academia, given to majors by an unnamed professor (who is later revealed to be Peter).

What follows are chapters introducing some of the "tribe," fellow anthropologists at Lannat who regularly congregate at the Coachman, a local pub, to drink Golden Ale and muse about the day's happenings. There's Fran, longtime Department Chair, Saul (one of the key figures in the novel), and a sarcastic Brit who calls himself Jacko. There are oddballs, too, not really part of the tribe, including Cliff, an obnoxious conservative, and Eaon, who practices something called "transcendental anthropology."

Each series of events is introduced in an anthropological setting, and faddish fashions come in for skewering, including political correctness (for missing cultural context when "forbidden words" are used) and "learning outcomes" (for measuring the wrong things).

Peter learns to navigate department meetings and Curriculum Committee politics, but there comes a fateful day when he must confront stupidity, violence, and the overwhelming demands of academia, and readers will find this novelistic ethnography is also emotionally resonant. 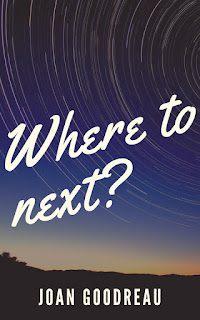 From facing wildfires and a pandemic, to life with her son, Ian, on the Autism Spectrum, Chico poet Joan Goodreau asks a profound question in her new book.

"Where To Next?" ($9.99 in paperback, self-published, facebook.com/authorjoangoodreau; also for Amazon Kindle) collects poems that point to a hopeful, though still mysterious, future.

"Diagnosis" (the poem that introduces the first section of the book, "On the Spectrum") puts it this way: "I picture a train with Ian and me/ pulling out of the station/ to an unknown destination/ with nothing but the clothes on our backs./ I don't know when we'll arrive/ only the time of departure and/ we will never return to/ where we are now."

In "Group Home Evacuations: Camp Fire 2018," "neon fire slashes between/ the black ridge and sky.// From this gash of blood/ men evacuate from 19 group homes/ creep in Cal Vocations vans down Skyway Road." Hours later, parked near Woodson Bridge, Sam can't quite understand the enormity of events. "'Tomorrow when I go home I'll/ ... hang with friends/ go to Jaki's Hilltop Cafe for the hamburger special.'"

In "My Son Evacuates," Ian is perplexed that he cannot "walk the paths of Bille Park." "But," the poet observes, loving him, "if he repeats repeats repeats/ his swaying long enough/ maybe his world will reappear/ rise through Ponderosa pines/ just like before."

"Heart Murmurs," the second section, traces the disparate lives of a mermaid, wanting legs "'for hope of love'"; a woman with second thoughts about dating online; and an old besotted veteran remembering better days.

In "Our Times 2020," the third section, the poet writes of the "Corona Star," "Locked down inside Zoom we/ shrink to rectangles of ourselves/ Outside sky sparkles/ soil breathes in relief.// But not for long...."

"Masks" faces a grim reality: "Evacuate again/ my autistic son and me.// Not the Paradise Fire this time/ but the Oroville Bear Fire./ Corona follows wherever we go."

And, finally, the section and poem called "Grace." As the poet faces surgery, a "white feather/ ... floats down before the entrance..../ This parachute of hope/ lands on rough asphalt/ stops me in my tracks/ holds me close in my present."