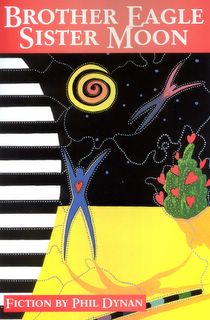 Phil Dynan is a runner, artist and the Peace and Freedom Party candidate for the 2nd District of the California State Assembly (a post now held by Richvale Republican Doug LaMalfa).

He is also a novelist, and his just-published work, "Brother Eagle, Sister Moon" ($12.95 in paperback or $4.69 download at www.lulu.com), tells two stories of modern day Iraq from the viewpoint of 12-year-old Yussef and his 16-year-old sister Nadia.

The author will appear at Lyon Books in Chico at 3 p.m. Saturday for a book signing.

The Corning resident bills his book as a young adult title. Though there are a few salty words the subject matter -- the war in Iraq and Nadia's being forced into prostitution -- is generally handled with discretion. Dynan says his writing enables him to express in gentle form his sympathy toward Iraqis as well as British and American troops. Dynan himself is harshly critical of the Bush Administration but his novel focuses instead on the friendship of the two siblings with Blackhawk helicopter pilot Sergeant Ernesto Alvarez of the 101st Airborne, the "Screaming Eagles."

Yussef finds himself separated from his large family and befriends an orphan goat whom he names "Tenika" after one of his sisters. "Yussef and Tenika spent almost 11 weeks together -- walking the plains, searching the hills and waterholes of Southwestern Iraq. ... They lived from the land, ate dates, berries and grass, and took water and milk where they could find it. They became friends. ... They had 'grown up' together and become young adults. Although they missed their parents ... they had learned to live within the boundaries of their world. ... They lived in harmony with each other and the beasts and other living things that surrounded them."

Then the pair stumbles upon a city, a "sea of humans," in which insurgents hold workers from Doctors Without Borders. Here, Yussef meets Dr. Yvette Prigent and he must mount a courageous effort to take a message to Red Crescent officials for help. He also meets Alvarez, who is about to propose to Prigent, and the pilot is willing to divert his helicopter to help Yussef find his parents. Things do not go well.

But somehow all the harrowing adventures lead to a good end. Along the way there is a healer, called the Ancient One, who touches the sergeant's wounds. He peers inside Alvarez's dreams and carves something on a piece of shrapnel taken from the pilot's arm. Finally, Yussef is reunited with his family.

Later, Alvarez returns to the family to ask Nadia for an extraordinary favor. He wants her to return to Samarra, to the kidnappers who had forced her into prostitution. They have taken several hostages, among them Dr. Prigent, and Nadia needs to guide the forces to rescue those abducted. Nadia undergoes intensive training in handling a gun and defending herself and eventually the chief kidnaper meets his end at the hands of a Fijian sharpshooter stationed with British troops.

At first "Brother Eagle, Sister Moon" struck me as kind of a fairy-story since at the beginning the reader is privy to some of the goat's thoughts. Yet as the novel progresses there is more realism -- though perhaps surrealism is the better term. There are no answers here to the larger conflict, only hints that one day, perhaps, even people can live "in harmony with each other."