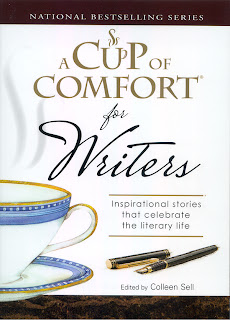 The "Cup of Comfort" Series (www.cupofcomfort.com) features short, true stories, mostly by freelance writers, organized around a variety of interests.

Colleen Sell, based in Eugene, Ore., has edited 19 of the volumes, including one of the newest, "A Cup of Comfort For Writers: Inspirational Stories That Celebrate the Literary Life" ($9.95 in paperback from Adams Media).

She says in her introduction that "it took a while for me to realize that writing is not just something I do; it is an essential part of who I am." Storytellers understand that writing is not opposed to living; it's part of living. "It is important," she adds, "for us writers to share our experiences and emotions, to tell of our trials and our triumphs, and to speak our truths about the writing life."

Some of those lessons emerge in the chapter called "Potty Talk" by Redding resident Marla Doherty (who has also contributed to the volumes on mothers and daughters, women in love and dog lovers). A note on the 50 contributors says that Doherty "coordinates the Northern California Authors' Fair. & Her creed in writing and in life: live, love, laugh and embrace failure."

"Potty Talk" is about "growing up a wallflower in a family of yakkers. & It made me an observer of life lessons that I later carried to my writing. & Special honor goes to my favorite, Aunt Pauline (passed from this world and conveniently silent, unable to defend herself), because she smoked."

Smoking was off-limits in Doherty's family, so Aunt Pauline "pretended she didn't smoke. For love of his daughter, Grandpa pretended to believe her." At holiday gatherings, "Aunt Pauline would periodically withdraw to the bathroom — trailed by her younger, nonsmoker sisters — to sneak a cigarette or two and gab. & For years, we kids could only wonder at the secrets behind the bathroom door."

Then one day Doherty was allowed into the sanctuary. She found "my aunts and mother, away from the men, had a different way of talking. & Stripping pantyhose, picking a hangnail, using the toilet, peering in the mirror to remove bits of spinach wedged between their teeth, they described embarrassments, boasted victories, admitted mistakes, rehashed failures — stories they rarely divulged to anyone outside their circle."

That could be the coda for the book. From cancer survivors whose writing sustains them, to stories of rewrites, rejections, procrastination, love letters and writing groups (the "Inklets"), the writing life gets personal. The "Comfort" series is both an outlet for writers as well as a market. Maybe that's the best encouragement of all.