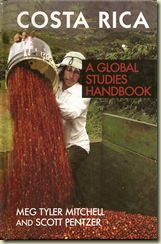 Scott Pentzer, recently inducted into the Chico High School alumni hall of fame (he graduated in 1984), has lived with his wife, Meg Tyler Mitchell, for almost four years in San José, Costa Rica. His parents, longtime Chico residents, wrote me recently that Scott "is director of Latin American programs for a consortium of colleges and universities located in the U.S. Midwest that offer a Latin American experience for their students. The couple received doctorates in Latin American Studies at Tulane University in New Orleans."

Now they've collaborated on "Costa Rica: A Global Studies Handbook" ($55 in hardcover from ABC-CLIO), part of a series devoted to selected Latin American countries. The handbook is not a travel guide but rather a highly readable and nuanced survey of Costa Rica's history, politics, culture and economy, useful not just to travelers but to students and business people as well.

The book is divided into two parts; the longer narrative section addresses everything from geography to health care, from political and social challenges to arts, literature, and soccer. The second, smaller, section is a reference guide which includes notes on language and etiquette.

The authors write that "Costa Rica is a very small country in an out-of-the-way corner of Latin America. Costa Ricans themselves have been heard to muse on how small their population is compared with some of the giants of the Americas, how many times the 4 million Costa Ricans could fit in Mexico City. . . . Perhaps these perspectives explain their habitual use of diminutive forms in their speech, giving them the self-imposed nickname 'ticos.'"

The handbook notes that "Costa Ricans are private people; family always comes first, before almost every other obligation"; sometimes "hospitality to strangers is a nice attitude to adopt, if it does not really have to be taken too seriously. Costa Ricans themselves joke that ticos love to invite people to their houses, but they never give out the address."

If a theme pervades the book, it's that of the troubled Costa Rican self-image. "The country is passing through a moment of institutional crisis and self-doubt" just when tourism is increasing and foreign investment is heating up. Mitchell and Pentzer provide a dose of reality behind the tourist brochures.