The business side of Sierra Nevada Brewing Co. 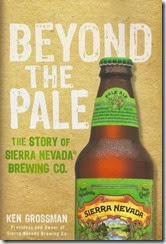 Sierra Nevada's first brew date was November 15, 1980. Almost a quarter century and uncounted bottles of Pale Ale later, Ken Grossman, president and owner of the company, contemplated retirement. Then he read a book by "Gary Erickson, the founder of Clif Bar and Company, that chronicled his struggle with the direction of his company at a similar point in his life. His story was similar to mine, with a troubled partnership and the near sale of his company to a major industry player. He changed his mind at the absolute last minute and walked away from signing over his company and had since rededicated himself to it."

With Sierra Nevada, Grossman writes, "we built one of the best breweries in the world." Now, as he rededicated his energies, he learned the importance of a sales team, made plans to build a second operation in North Carolina, and nurtured the next generation of craft brewers. In an odd way, a Clif Bar saved the vision.

Grossman tells the story of Sierra Nevada Brewing Co. in "Beyond The Pale" ($24.95 in hardcover from Wiley and in Amazon Kindle format). It's a business memoir, with a color photograph section included, recounting the growth of a company that by 2010 was producing 800,000 barrels and running out of room. There were financial and personal challenges, including the tragic loss of the company's first employee, Steve Harrison. His death, Grossman writes, "was the worst thing the brewery has ever been through."

But the focus of the book is on how the business navigated the ups and downs of the craft beer revolution and how Grossman, an avowed beer purist, became a beer scientist, "shunning pasteurization" and instead focusing on "the yeast and the cleanliness of your plant." As far as the hops are concerned, "we have the one of the most sophisticated gas chromatographs available for aroma analysis." He discusses management style as well, and the use of alternative energy.

It's wisdom to tap into.

Grossman will be signing copies at Sierra Nevada's "Single, Fresh, Wet and Wild Harvest Festival" this Saturday from 1:00 - 6:00 (visit sierranevada.com/sfww for ticket information) and Lyon Books in Chico will hold a free signing event on Tuesday, Oct. 29 at 7:00 p.m.