"Tales Of The Paradise Ridge" 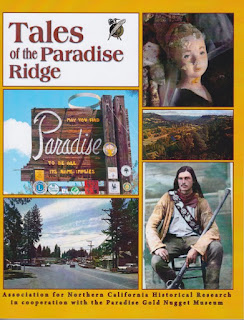 "January 1960 saw the beginning of a new adult night class in Butte County History, taught by Ruby Swartzlow." As Sherrie Gobin Rosen writes, "It did not take long before this large class decided there was a lot of history in and around Paradise, but not much of it was written down anywhere. The group decided they really needed to remedy that, thus the first issue of Tales of the Paradise Ridge was born in June 1960." Sherrie's dad, Ted Gobin, was deeply involved in exploring local history. He was also my bus driver during my grade school days in Paradise.

So it is with a sense of sheer delight that key articles from Tales, selected from its entire run through 2018, have been published by the Association for Northern California Historical Research (ANCHR) in cooperation with the Paradise Gold Nugget Museum (temporarily located at the Depot Museum, 5570 Black Olive Drive).

"Tales Of The Paradise Ridge" ($19.95 in paperback from ANCHR.org, available at ABC Books in Chico and a host of other locations listed on the ANCHR website) brings together three dozen articles, including images, exactly as they appeared in the original issues of Tales.

To that end, ANCHR Publications Editor Josie Reifschneider-Smith has compiled this volume specifically focused on the Paradise area, and the place of the Museum in Ridge life, as a Museum fundraiser.

There are nuggets aplenty in the book. Swartzlow writes about the development of the Skyway (which opened July 1950); Lois McDonald on the Paradise census of 1880 (spoiler alert: 301 persons "on the Ridge"); Connie Rogers on the Depot Museum; Rosen on Paradise in the Thirties, Forties and Fifties; Criswell on Yellowstone Kelly (and the Heritage Trail); Tonya Dale on the Paradise sign.

There's also a picture of the front of Barnett's Market in the midst of the 1964 Gold Nugget Parade. My dad would have been proud.