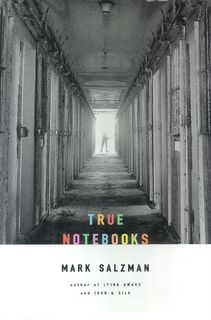 Mark Salzman, author of "Lying Awake," one of my favorite recent novels, will speak at Laxson Auditorium on the Chico State University campus at 7:30 p.m. Oct. 11.

The talk, which is free and open to the public, will center around his work of non-fiction titled "True Notebooks" ($24 in hardcover from Knopf), selected as this year's "Book in Common" at the university.

A free ticket is required for admission and can be picked up at the University Box Office, located on the corner of Second and Normal streets.

According to a news release, "The Book in Common at Chico State is the book required to have been read by all entering freshman students. ... The common freshman reading is designed to engage each student in considering and thinking about cultural diversity, immigration, (and) social service institutions."

Salzman began teaching a writing class at Central Juvenile Hall in East Los Angeles after visiting a similar class there in the summer of 1997. At the time, Salzman writes, he was stuck in his writing of "Lying Awake." He wanted to include a juvenile delinquent in the story and hadn't a clue how to do it.

So a friend of his, Duane Noriyuki, a Los Angeles Times writer, invited Salzman to sit in on his course at Central, "in a unit reserved for HROs, or high-risk offenders -- they were, as one law enforcement official put it, 'the cream of the crud.' Most of the HROs at Central were charged with murder, rape or armed robbery, and were declared unfit to be tried as juveniles, meaning that their cases had been shifted to adult court. No Youth Author-ity camps or guaranteed release at age 25 for members of this group; if convicted, they received adult-length sentences and went straight to prison."

Salzman was reluctant to visit but then he met Sister Janet Harris. The nun "was nearly 70 years old but looked two or three decades younger. ... Sister Janet explained that she'd been Catholic chaplain at the hall for years, but the increasingly punitive trend in the juvenile justice system made her feel that ministry was not enough"; she helped form the new "Inside Out Writers" program which, said Sister Janet, gives "these young people a chance to express themselves, and feel that someone is listening."

Soon Salzman has started his own writing class in the K/L Wing. Meeting twice a week for an hour, at first the group is small: Kevin, Patrick, Jimmy and Francisco. Salzman would quietly suggest topics and the group would write for half an hour and then read their essays aloud. One student asks Salzman whether cuss words were OK in class; indeed they were, and "True Notebooks" pulls no punches in reconstructing the conversations in the class and presenting the students' actual writing. Over the months more boys arrived. Some left for prison, never to be seen again.

"My students were violent criminals," Salzman writes, "but I no longer thought of them as bad people. In fact, I felt almost no curiosity at all about what they had done to get arrested; all I cared about was what they wrote and what happened during our meetings. Was that healthy? Was it fair?" Much later he writes that "my primary goal with the boys at K/L had never been to save them or improve them or even to get them to take responsibility for their crimes. I was there because they responded to encouragement and they wrote honestly; surely that sort of interaction between teacher and student has value, even if it does not lead to success beyond the classroom."

The student writing is heartbreaking.

Verbally inarticulate, Dale wrote: "Deep down inside, this angry person awakens. Another day facing perpetual incarceration behind no mercy walls, as we are inmates."