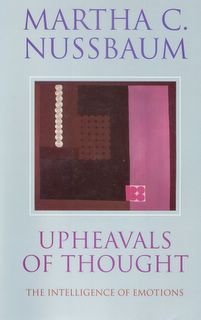 Martha Nussbaum begins with her mother's death in 1992.

In Ireland to deliver a series of lectures on emotions, Nussbaum learned a routine operation her mother had undergone had had life-threatening complications. "This news," she writes in "Upheavals of Thought: The Intelligence of Emotions" ($27.99 in paper from Cambridge University Press), "felt like a nail suddenly driven into my stomach."

A transatlantic flight took her to Philadelphia, where hospital staff told her she had arrived 20 minutes too late. "In the weeks that followed," she says, "I had periods of agonized weeping; whole days of crushing fatigue; nightmares in which I felt altogether unprotected and alone. ... I felt, again, anger -- at the doctors for letting a routine operation lead to catastrophe, although I had no reason to suspect malpractice; at people who phoned on business as if everything were normal, even though I knew they had no way of knowing otherwise. ... Above all, I felt anger at myself for not being with her on account of my busy career. ..."

Is the intense emotion of grief merely something that comes over us, like a storm surge, uncontrolled and uncontrollable, only to diminish with the passing of time as the emotional waters drain from us? Or can emotions be in some sense "reasonable," are they in fact in some way connected with our very reasoning process itself?

Nussbaum, professor of law and ethics at the University of Chicago, will discuss the nature of emotions, and specifically political emotions, in a free public lecture at Chico State University tonight at 7:30 at Ayers 106. The presentation, sponsored by the university's School of the Arts, is one in a series of lectures by distinguished presidential scholars. Nussbaum will speak on "Radical Evil in the Lockean State: The Neglect of Political Emotions" which will address, according to a news release, "possible solutions to the problem of intolerance, religious or otherwise, in democratic liberal societies."

Nussbaum will also appear at 9 p.m. Saturday in PAC 134 on campus, to give the keynote address for the Society for Women in Philosophy conference.

Nussbaum is the author of a dozen substantial books including "Hiding From Humanity: Disgust, Shame and the Law" and "The Fragility of Goodness." When Simon Blackburn reviewed the book in The New Republic, he said Nussbaum "is among America's most prolific and prominent public intellectuals. ... She has worked extensively on education, on development in the Third World, on law, on homosexuality, and above all on the injustices of gender ... she is a dedicated opponent of all that is glitzy and trashy in modern culture."

Emotions are, says Nussbaum, distinct from appetites like hunger or thirst and from feelings of being down or being irritated, which she calls "objectless moods." Emotions, by contrast, do have objects -- her grief was about her mother, her anger about the doctors. But more than just "about" -- emotions express the way we see things and even involve beliefs about those objects, beliefs that characterize their objects with some kind of value or significance.

Nussbaum has taken lessons on emotions from Aristotle (who taught that emotions could be proper or fitting in a given situation) and, most notably, from the ancient Greek Stoics, who believed emotions did indeed express a kind of thinking but who then condemned all emotions as excessive. The author rejects the Stoic condemnation of emotions but keeps the idea that emotions do express value judgments. (I am angry at the various seemingly feeble early governmental responses to the poorest victims of Hurricane Katrina; my anger is a judgment that something is morally amiss.)

Throughout the book, the intellectual adversary is a philosophical tradition that characterizes emotions as purely irrational. Nussbaum is convinced emotions not only can be reasonable but can in fact be true or false. Societies can properly use education to train emotions since emotions are amenable to reason. She finds compassion a good thing (capable of extending beyond one's familiar circle), while disgust (at sexual or religious orientations not our own; or at criminal behavior) is not so helpful.

"Upheavals of Thought," though technical in places, offers a grand opportunity for the interested reader to see how the music of Mahler and the writing of Augustine, Proust, Joyce and Walt Whitman all illuminate Nusbaum's thesis. Though I have profound disagreements with some of what Nussbaum has to say, her book is indispensable in opening up emotions to thoughtful consideration.