Growing up in Oroville with an alcoholic father, a law professor struggles to learn kindness 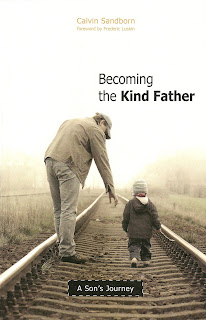 Calvin Sandborn graduated from Chico State University and is now a member of the University of Victoria law faculty, supervising that school's Environmental Law Clinic.

He writes me that his new book, "Becoming the Kind Father: A Son's Journey" ($15.95 in paperback from New Society Publishers) is "a story of growing up in Oroville with an angry alcoholic father. The book has become a best-seller in Canada, and sales are beginning to rise in the U.S."

That suggests it's meeting a need for men trapped in a system of patriarchal expectations summarized in the "Boy Code" delineated by writer William Pollack and others: Be stoic and don't show weakness; don't show emotion, unless it's anger; be macho; and in a world of winners and losers, don't be a loser.

Sandborn writes that "my own father was a harsh, hard-drinking, hard-swearing, tattooed man's man. He drilled the Boy Code into me, and insisted I wear the Masculine Armor. But this book is the story of how, in mid-life, I abandoned the armor and took off the mask. As I passed from hero to mortal, I began to feel again. After decades lost in man's deep sleep, trapped in patriarchy's tragic script, I reestablished a relationship with my self."

Unable to escape the inner voice of his late dad ("Can't I count on you for anything?" "Don't cry!"), Sandborn turns to a counselor who helps him replace the voice of the Harsh Father with that of the Kind Father. The author also learns "an emotional vocabulary," so rather than exaggerating a difficulty ("I'm furious!") or falsely minimizing it ("It's nothing!"), he learns to talk about being irritated, frustrated, peeved or sad. It was a liberation in terms of his physical health and the simple enjoyment of life.

There is strong language here as Sandborn recounts the self talk of the Harsh Father. The Kind Father is affirming and supportive; Sanborn's claim that "we all merit grace" is less a theological statement than a plea to give each other a break since everyone makes mistakes.

Chapters in the book deal with the problem of chronic anger and how to forgive oneself. Mixing insights from group therapy, Christianity, Buddhism, Greek myth, anger research and his own experiences, Sandborn comes to understand his father, someone who had no one to tell him the good things about himself.