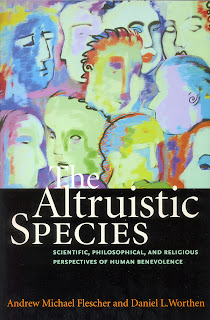 It's likely that within a short distance of where you are there are people who could use your help. Maybe those people are in your own family.

Helping them would cost something: in time, treasure or emotional involvement, and it's tempting to think that genuine self-giving is the province of those moral saints we can never hope to emulate. But, according to two Chico academics, we'd be wrong.

Associate professors Andrew Michael Flescher (religious studies) and Daniel L. Worthen (psychology) contend that altruism (a regard for others in which their well-being becomes "the ultimate object of one's concern") is practiced by more "everyday" people than we might think. For the past several years the two instructors have taught "What Motivates Altruism?" to groups of honors students, taking a multi-disciplinary approach to the study of the phenomenon. But it's not just theory. Each student is asked to shadow certain Chico residents who are "directly engaged in social advocacy, welfare, and service." Students report back how ordinary these people are. And they begin to see that altruism is not just for the Mother Teresas of the world.

Flescher and Worthen have now published a book based on the class. "The Altruistic Species: Scientific, Philosophical, and Religious Perspectives of Human Benevolence" ($34.95 in paperback from Templeton Foundation Press) will be the subject a talk given by both authors 3­4:45 p.m. Friday in Trinity 100 on the Chico State University campus. The event, sponsored by the Department of Religious Studies and the Humanities Center, is free and open to the public.

Though the book delves into biological kinship systems and Immanuel Kant's categorical imperative, the writing is clear and accessible. In its calm way of demolishing objections to the authors' contention that most all of us have the capacity — and moral obligation — to become more altruistic in our character (as part of what Aristotle called human flourishing), the book is also revolutionary.

Two examples will suffice. Chicoans Farshad Azad, whose Basket Brigade helps feed people during the holidays, and Matt Jackson, "who launched Chico's Boys and Girls Club" and volunteers with the NAACP, "stress not only that there is little special about them ... but also that the effort they exert should not be confined to themselves alone. The 'work' of becoming altruistic can and should be shouldered by many."

It's a matter, the authors say, of "practicing ... moral skills" which become part of the "stable character" of altruism. It is a measure of the genuinely happy life.