Ever feel that someone is watching you? 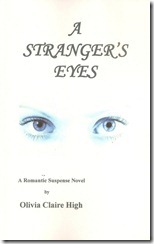 "I've been having strange vibes that I'm being watched," she tells her friend Catherine, "and I get this vision inside my head of a person. I think it's a person because all I can make out is a vague form, but I'm convinced a presence of some kind is there." There is indeed a presence--an obsessed woman driven by a voice in her head she claims is Ryan's late wife.

The story of obsession leads the couple to Hawaii and the far reaches of Northern California. Lives are at stake in "A Stranger's Eyes" ($13.95 in paperback from Fireside Publications; also available in Amazon Kindle e-book format), a sequel of sorts to "Dreams--Shadows of the Night" which featured Sam's friend Catherine Ashley. She was now married to Josh Dallas after his kidnaping in the Amazon. As Catherine listens to Sam, she tell her that "I've had prophetic nightmares. You believe you're being watched by unseen eyes. Both are occurrences not easily explained. They bring out intense emotions that cause feelings of helplessness and fear."

Samantha fears not only for Ryan's life, but that of his daughter, and makes the fateful decision to do as her accuser demands--leave them. She finds solace in a small California mountain town whose residents' lives become intertwined with her own. One might expect Ryan to come to the rescue, and festivities to break out, but there are surprises in store. Even as obsession is dealt with there is another sinister visitation. "An unrecognizable figure," Sam tells Ryan, "came inside my head watching like before."

There is a madman on the loose, and this time the target is Ryan himself. He finds a crushed rose under his windshield wiper, a box of broken cookies, and Sam sees the spray painted words: "You're next, Mrs. Wade." The couple must make a fateful choice and the action never slows until the end.