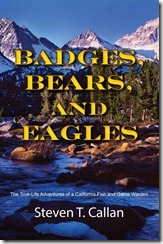 In 1960 young Steven Callan and his family moved to Orland; a decade later he graduated from Chico State University. He was hired by the California Department of Fish and Game, became a patrol lieutenant, and transferred to Shasta County in 1981. His career in enforcement spans thirty years; along the way he became active in a host of environmental groups and now lives with his wife in Palo Cedro. His biography establishes his bona fides as a street-smart warden with a tale to tell.

Make that twenty-three tales. "Badges, Bears, and Eagles: The True-Life Adventures of a California Fish and Game Warden" ($13.95 in paperback from Coffeetown Press, callan.coffeetownpress.com; also available in Amazon Kindle and Barnes and Noble Nook ebook formats) is a thrilling ride into the heart of bad guy country. Which is pretty much anywhere in the state, any place that people can abuse wildlife and habitats for a profit.

Callan will be signing copies at the Chico Costco this Friday, June 14, from 10:00 a.m. until 4:00 p.m. A recorded interview is set to air that Friday morning at 10:00 a.m. on Nancy's Bookshelf, with host Nancy Wiegman, on KCHO, 91.7 FM (Northstate Public Radio). The following month, on Thursday, July 25 at 7:00 p.m. look for a signing and presentation at Lyon Books in Chico.

The author has reconstructed his and other cases from memory, interviews and court documents. The result is a series of suspenseful, well-written procedurals in which good triumphs, but not without a lot of foot work and tense dealings with well armed scofflaws.

"The Eagle Case" opens the collection, telling the story out of the Redding regional Fish and Game office in 1985 involving threats to a warden; the killing and possession of a bald eagle, mountain lion, and ring-tailed cat--and that was for starters. The final story, "Bears and Bad Guys," is the longest and most complex, taking up the last quarter of the book. A note summarizes the tale: "In 1995, Lieutenant Steve Callan and Warden Dave Szody conducted a three-year undercover investigation into the unlawful killing of California black bears for their gallbladders, possibly the most successful wildlife related criminal investigation in California history."